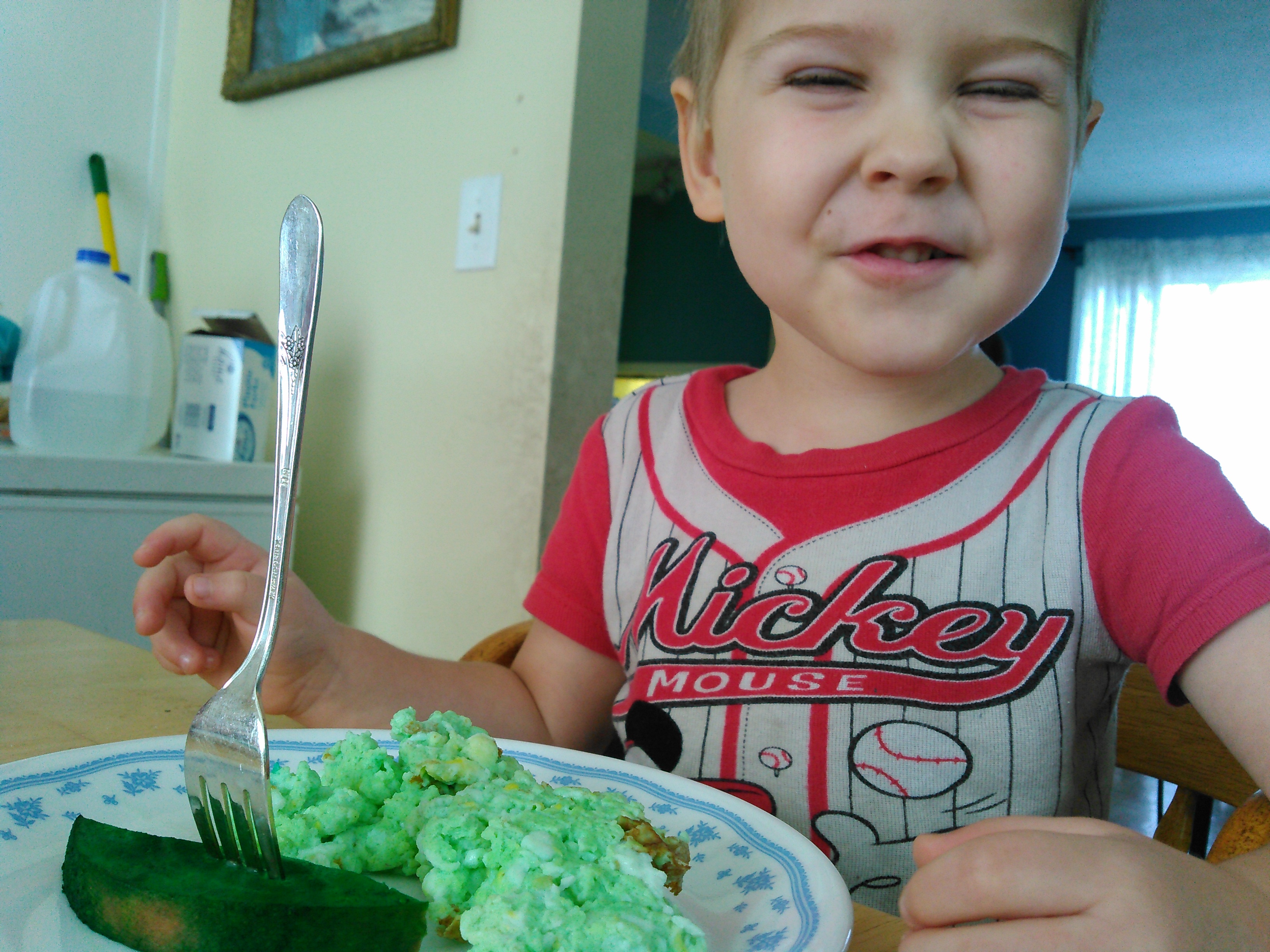 Small Fry has been really into Dr. Seuss lately. We own a couple of the books, and recently got a big stack of them from the library, one of which is Green Eggs and Ham. We’ve read it several times, and he’s to the point where he can finish a few of the lines now. So the next step, naturally, was to make this dish for him for breakfast. So that’s just what we did one day earlier this week. (I don’t know of a way to make just the yolks green, like in the book, so every time one of our children gets to this stage, I just make green scrambled eggs.) 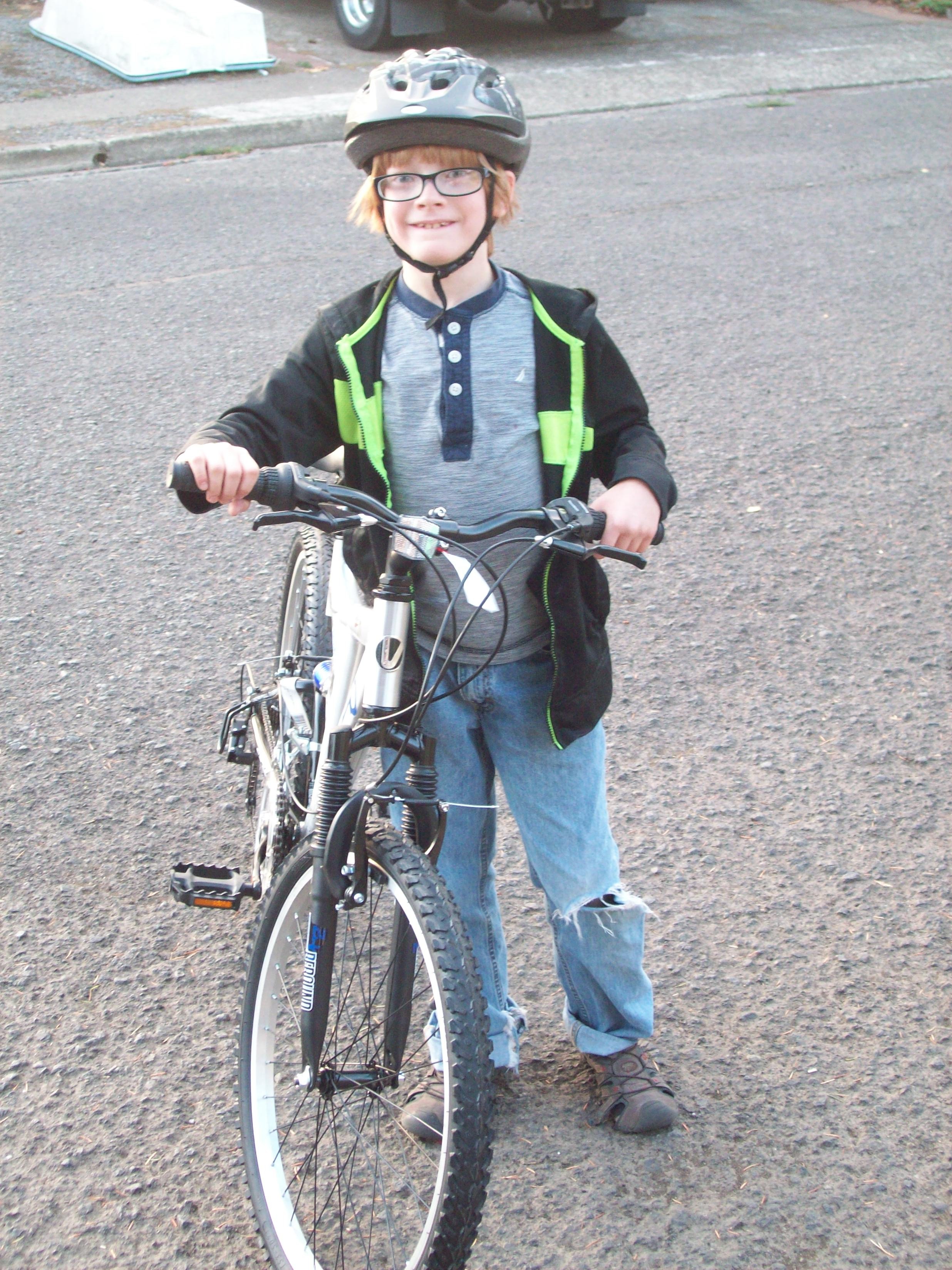 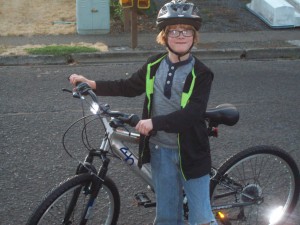 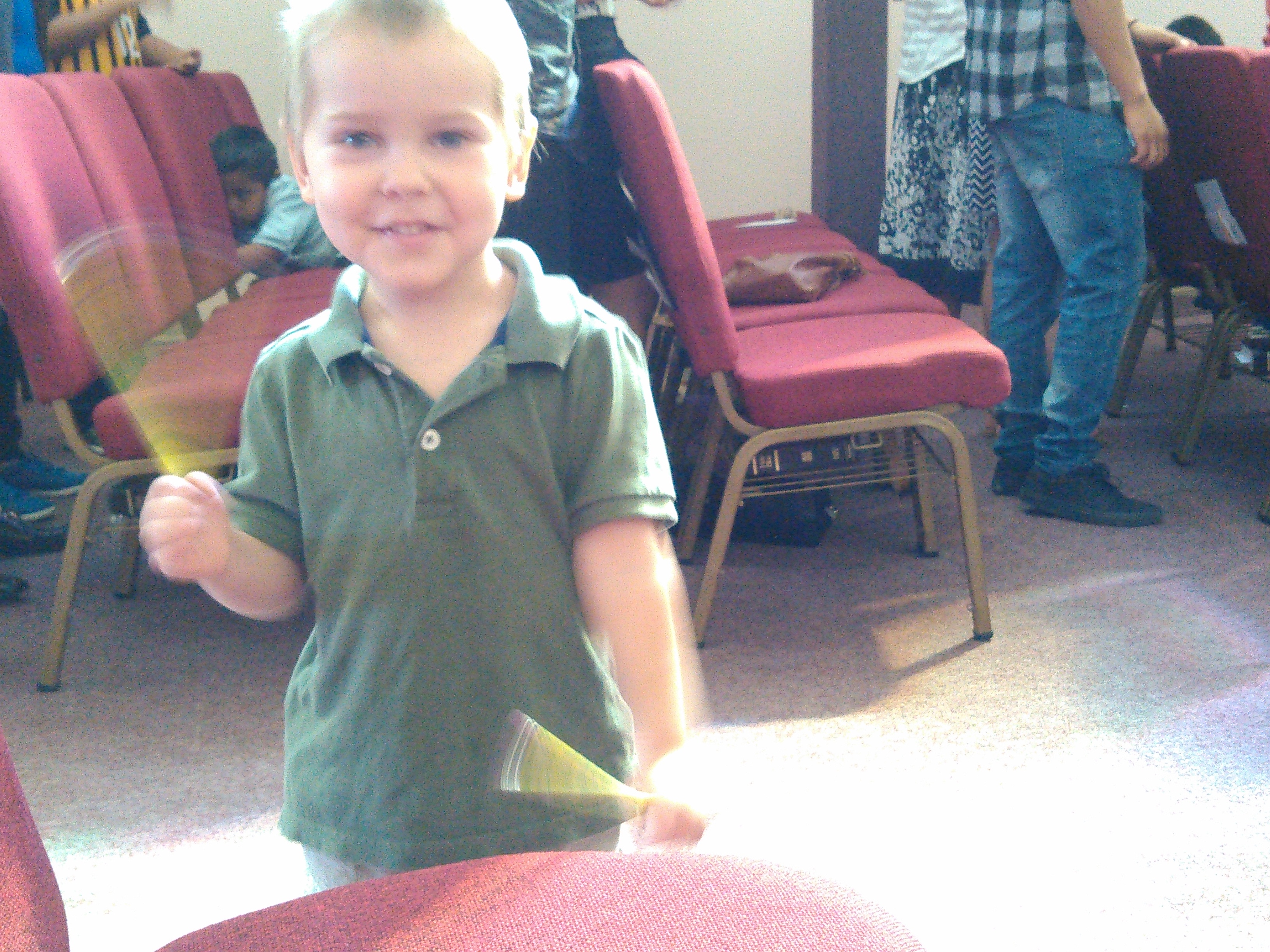 Small Fry loves to drum. A lot. He’s constantly looking for (and finding!) pencils with which to hit something. Anything. Usually a chair or the rim of a garbage can.

He also likes to play Seahawk’s imperfect child-size guitar (imperfect because it’s missing 3 strings, but it was a hand-me-down gift from a neighbor five years younger), but his real passion is drumming and singing.

Every Sunday at church, he finds pencils in the back of the pew and heads over to the aisle at the end of “our row” (not assigned, just wherever we happen to be sitting on a particular week) to drum on the seat with his pencils while we sing our worship songs. It’s adorable 🙂 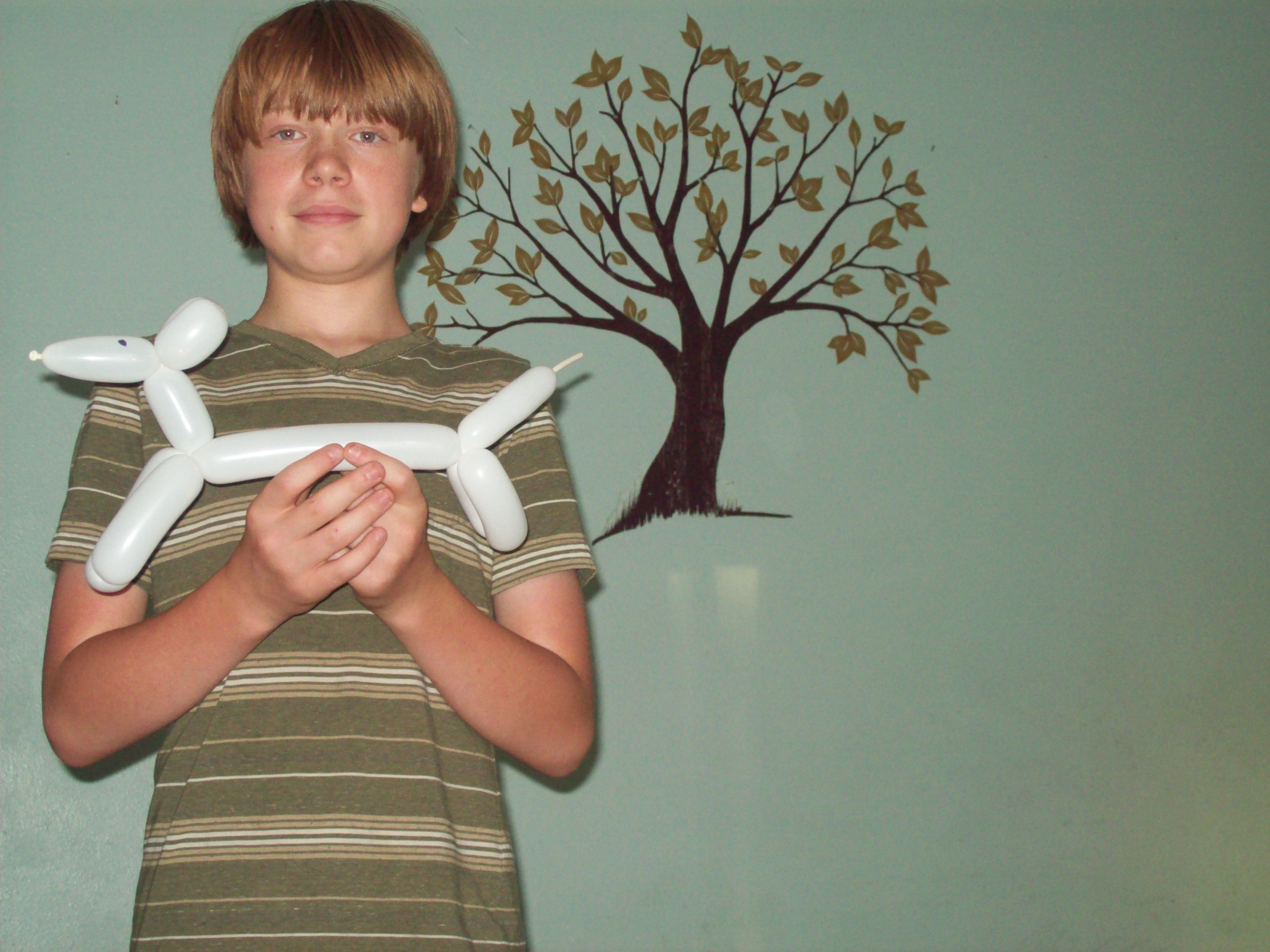 When Small Fry was getting ready for bed last night, we suddenly heard a blood curdling scream. Fortunately, Seahawk was with him and able to comfort him while he brought his little brother up to see me for additional cuddles and comfort. Will headed downstairs (where the boys’ bedroom is) to investigate what might have caused such a reaction from our three-year-old, and found this guy crawling on Small Fry’s pillow: 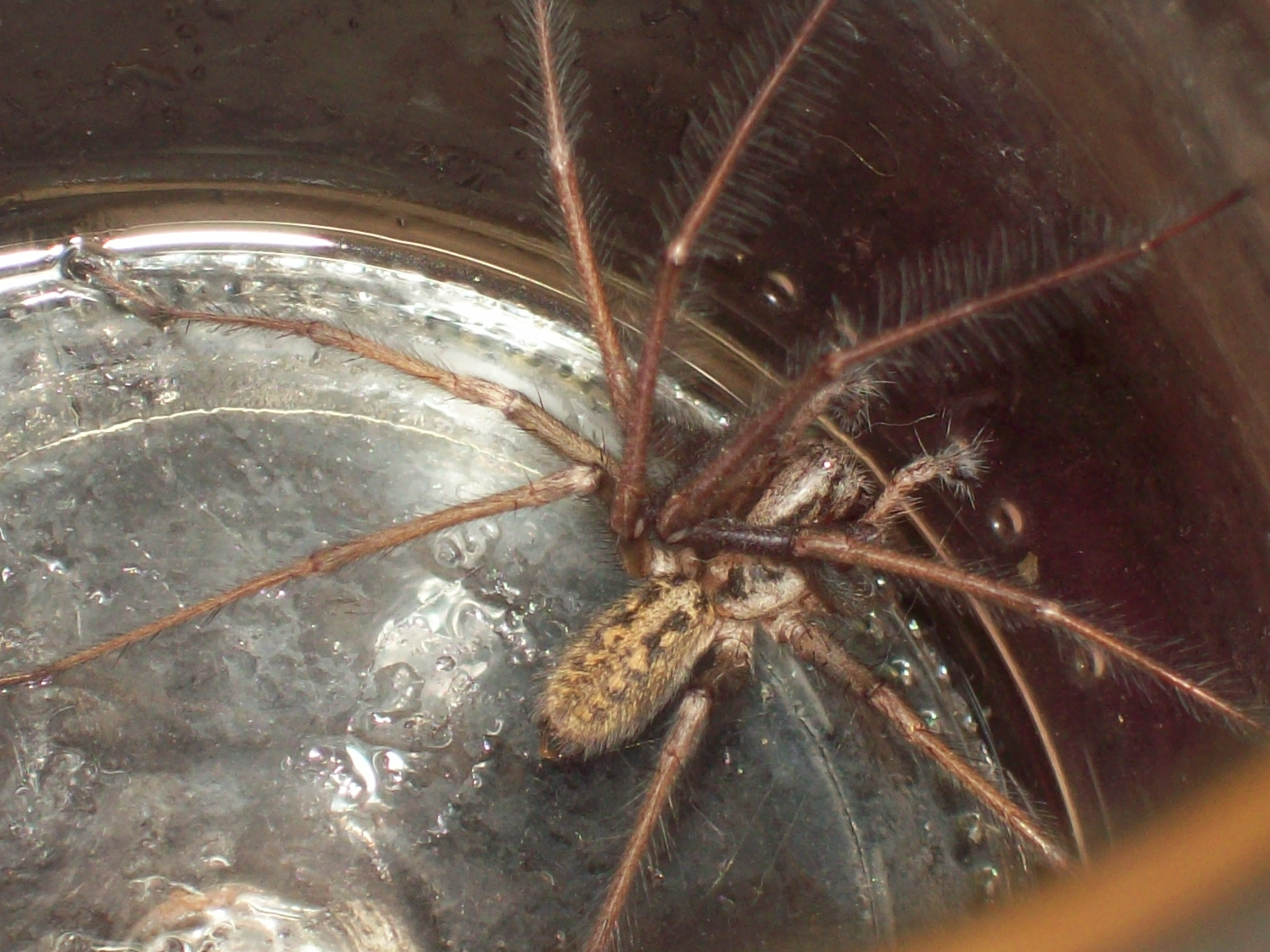 We were afraid it might be a brown recluse, so Will caught it to examine and do some research on before just killing it straight away. Fortunately, we were able to eliminate brown recluse as an option (those guys are really dangerous). After about an hour of internet research and comparing photographs of our spider vs those online, we’re comfortable in knowing it’s a hobo spider. They’re venomous but not aggressive or deadly to humans. Just really frightening due to their size – this one is easily 3 inches in diameter including the legs.

The plan is for Will to take it to an exterminator later today for a more precise identification.

Have you ever found super scary bugs in your house?

I posted these pictures on Instagram earlier in the week, but I want to put them up here as well. Last week (or maybe it was the week before…) I took the boys berry picking. The last time we’d gone was in 2013, and while we were successful in bringing berries home on that trip, the boys didn’t enjoy the experience. It was really hot, and they were too young (at 6 and 9) to do very well at it. It took us hours to bring home just a few pounds of berries.

Fast forward to this year. Now that they’re 8 and 11 – and Small Fry is almost 3, so old enough to help instead of just sleep the entire time – we had a much more positive experience. Small Fry and I shared one bucket, and Seahawk and Munchkin shared another one. Within half an hour or so, we’d nearly filled both buckets, putting us about $4 over what I’d budgeted for the trip. But that’s okay; who can say no to additional fresh marionberries?! 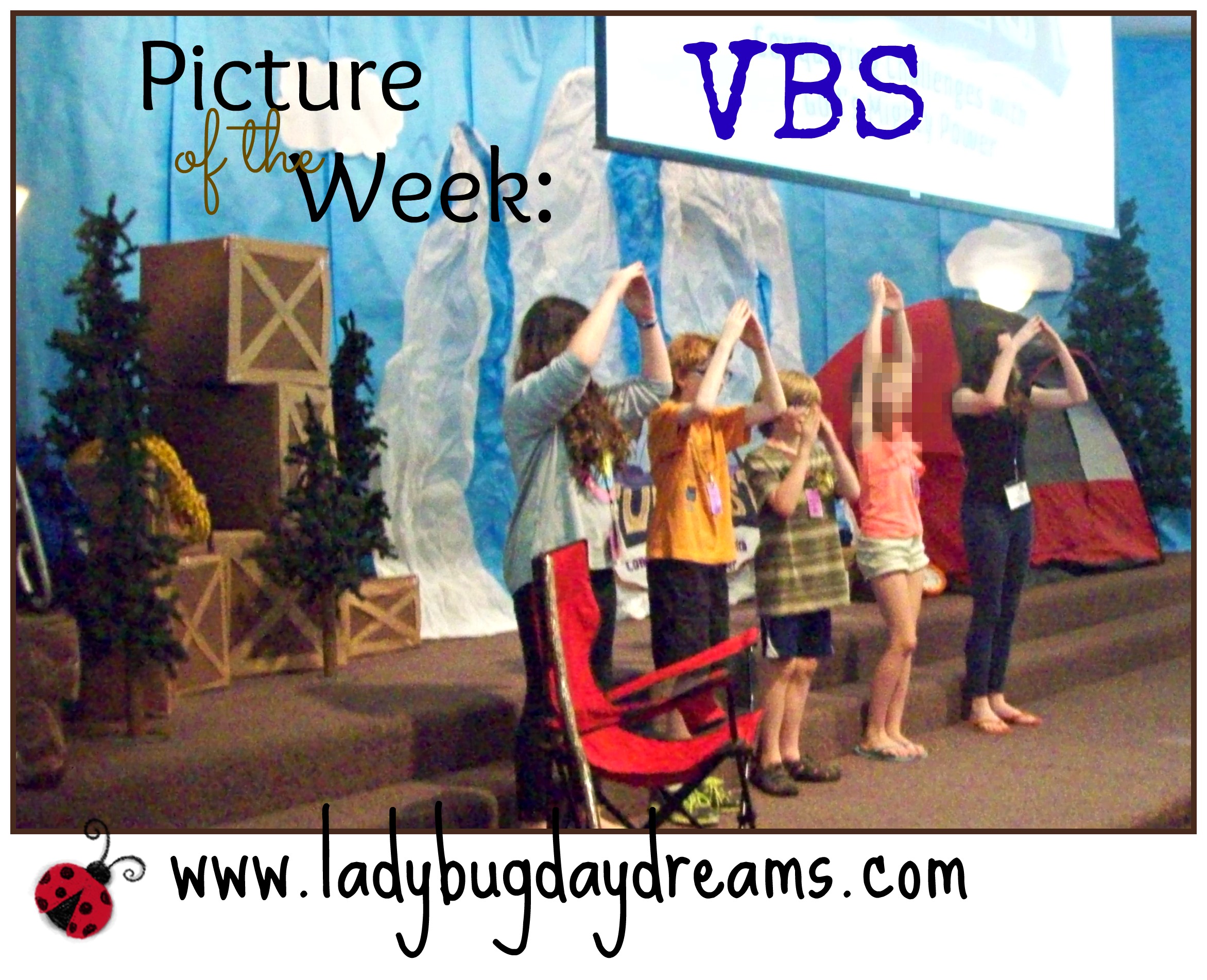 The two big boys spent the week at VBS. Seahawk was a helper (how did he get old enough to help instead of attend?!), and Munchkin was an attendee. The theme was “Everest,” and the kids learned that God can help them in a variety of ways, including helping them to help others. I didn’t attend or help along with them, but from their excitement each day I could tell that they were learning a lot. And both got rave reviews from their group leaders (Seahawk joined the youth group in leading the preschoolers in outdoor games) on their good behavior.

This picture was taken during the closing ceremony. Each group (called Crews) took the stage to perform a song for all of the parents. Munchkin’s group performed “The Hippopotamus Song.”

You might have noticed that things have slowed down here on the blog in the past couple of weeks. Here’s why: 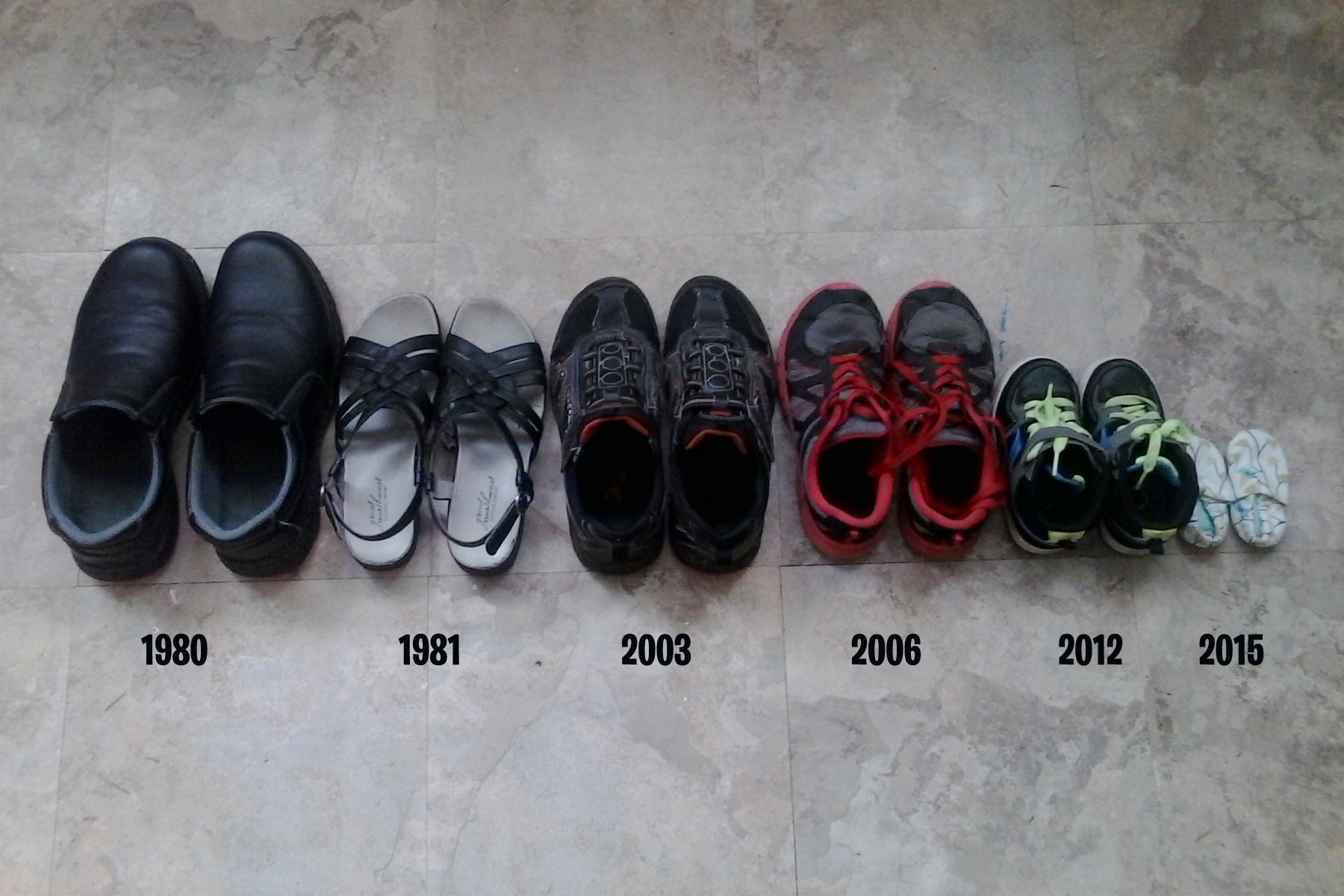 Yes, we found out two weeks ago that we’re expecting our fourth child this fall. And I got a nasty cold right on the heels of the positive test, so I’ve had virtually no energy recently. It’s about all I can do to get through the day without letting things like housework and homeschooling fall by the wayside. So for the next few weeks, things might continue to be quiet on these pages. I’ve got another Tales on Tuesday story all set to start next week, and when I think of something I really want to write about, that’ll go up here. And a few reviews, of course. But for the next month or so, until I get out of the first trimester and regain some of my energy, I’m not going to stress about blogging. I fully intend to get back up to a 3 posts a week schedule, but now’s not the time for that.

This picture is actually a few weeks old. I’ve had some phone trouble lately, including the inability to get pictures off of the SD card until I could get a new phone, which happened earlier this week. So I hope you like this picture that Will took back in January. 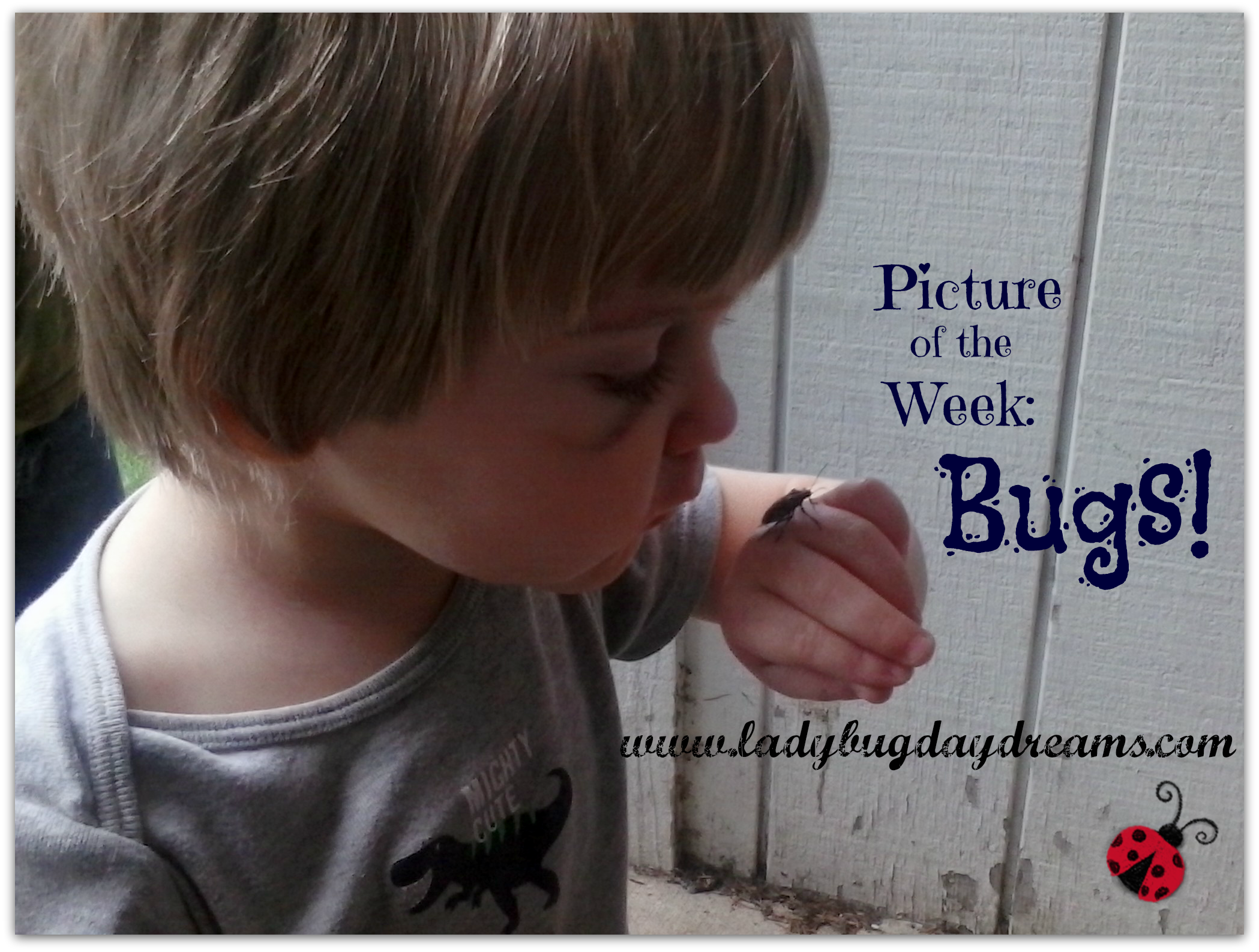 It’s no secret that my kids like bugs. They are, after all, boys. Outside our house the other day, there was a box elder bug (commonly called “stinkbugs”), and the kids got Small Fry to hold it. Will went out there with them and got this series of pictures of him. I love how intently he’s looking at the creature. Ah, the innocence of young children. 🙂 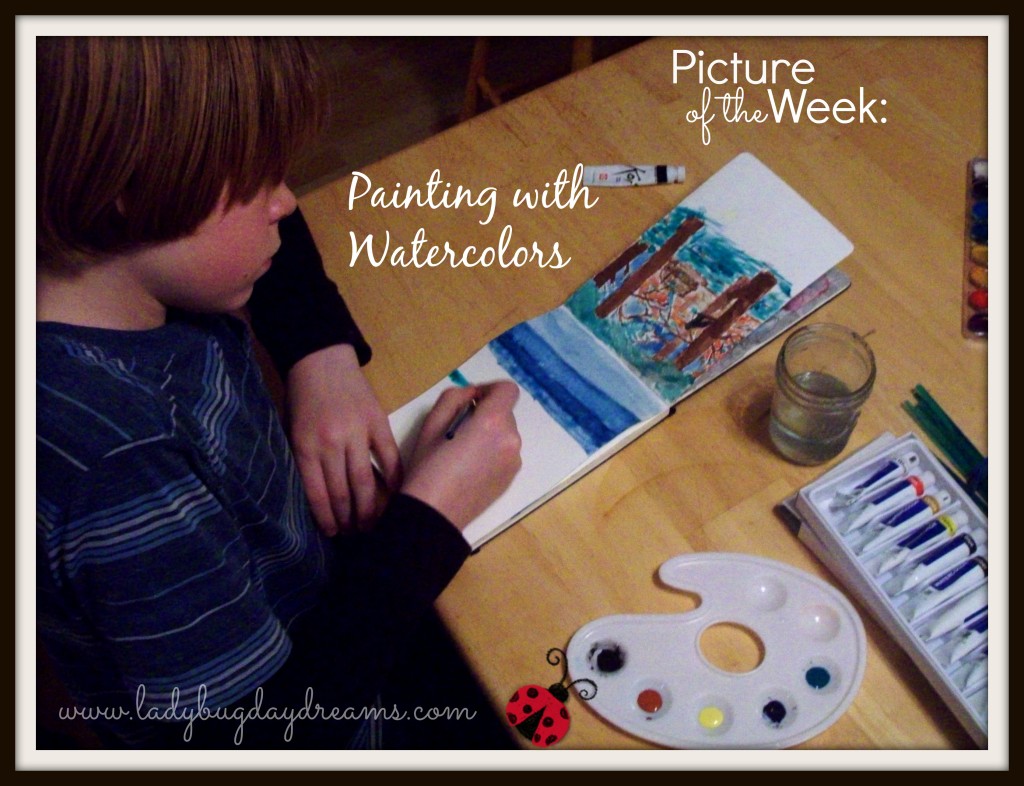 Seahawk requested some watercolor painting supplies for Christmas, so we happily obliged. As part of that, we got him a journal made with watercolor paper rather than regular paper. The understanding was that he would use his paints and journal to record some of the experiences we have this year. The goal is to paint a picture every day, but that doesn’t always happen. I’d say we’re averaging about twice a week at this point. In the few weeks he’s had the opportunity to paint regularly, I can already see drastic improvement in his skill.