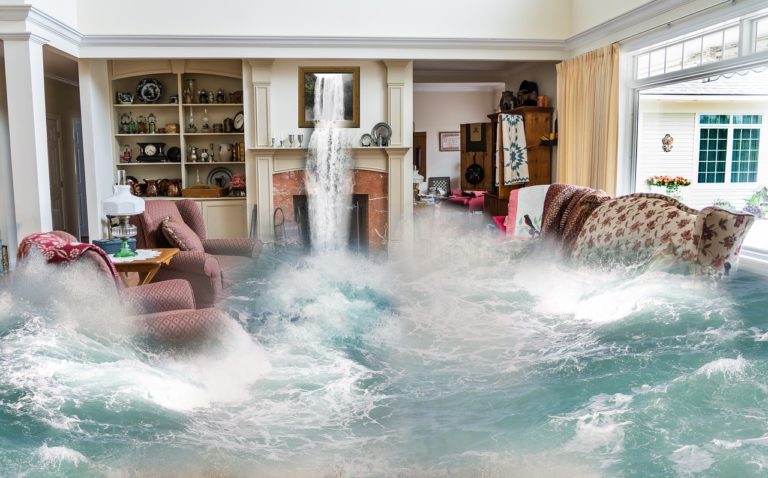 The past few weeks have been rather… interesting. About 4 weeks ago, the kids and I were at the house doing their lessons (we’ve been staying with my in-laws), just us. The washing machine was going, not unusual for that time of day (around 10 a.m.). Suddenly I heard a gushing sound. Assuming the washer had pulled its hose from the wall, I ran over and turned it off. Nothing happened. Well, the washer turned off, but that didn’t stop the water from continuing to gush. Seahawk rushed over to see what was going on. Being younger and more agile than me, he was able to climb up onto the top of the dryer to get a peek at what was going on. All he could tell was that the water was coming straight out of the wall. All the while, water is building up on the floor, and is several inches deep at this point. We found as many towels as we could and built a dam between the laundry room and the kitchen (it’s just a regular-width doorway separating them) to try to mitigate the spreading of water. Seahawk got to work trying to find a way to turn the water off. When it became clear that that wasn’t working, he tried to figure out a way to divert the water instead. Munchkin was on the floor in front of the washer and dryer, sweeping as much water outside as he could (fortunately there’s an external door in the laundry room). I was on the phone trying to get either Will or either of my in-laws to come and help.

Seahawk finally gets the water diverted. He was so clever! He used the foil tube coming out of the dryer and jimmied it up to the leak. Since that tube already led to the outside by way of the dryer vent, the water started pouring outside instead of continuing to come inside. This whole process took about 30-45 minutes from the start of the leak. Not long after, Will arrived back for lunch to find us all frantic. He took over the calling of his dad and stepmom as well as anyone else he could think of (church people, mostly) who might be able to help. No luck. (Being a Monday morning, everyone was at work – except my FIL, who was a doctor’s appointment.) Finally his stepmom called us back and told us how to turn the water off at the street, so Will did that. This was nearly 1.5 hours after the initial outpouring started. It was such a relief to have the water stop! With no more water coming in, the four of us got to work cleaning up the pool that had taken over the kitchen. When we went into the master bathroom looking for more towels (we’d used up literally every single towel, blanket, and clothing item we owned besides what we were physically wearing at the time), another unpleasant surprise awaited us: that room was on the other side of the laundry room wall, and water had escaped under that wall and flooded that room too.

It took us another 45 minutes to an hour (and about a dozen Costco rolls of paper towels) to get the laundry, kitchen, and master bath dry. Right around the time we finished, my father in law called and let us know that he’d be there in 15 minutes and had gotten hold of a handyman-type from church who was also coming over to help. When they both got there, we left to get some lunch (it was nearly 2 p.m. now). We came back to a very frustrated FIL and friend. They’d tried several times to fix the pipe, but every time they turned the water back on to test their work, everything exploded again.

We had only a few minutes at the house this time, because it was the big kids’ ballet day. We took them out there, and I bought a few groceries while they were dancing. When we got back to town at around 7:30 that evening, the house was vacant. Will went into the bathroom while I put the groceries in the pantry. The water was still turned off – not a good sign. So he called his dad. His dad made an insurance claim, and they were putting all of us up in a motel that night and sending a work crew over to assess the damage the next morning.

Because it’s not my house, I’m not going to go into too much detail into the damage, but suffice it to say that with nearly every step the crew took (as in, step in the process, not footstep), they noticed more and more damage that would need to be repaired.

So, we’ve been living in a hotel for the past 4 weeks. Just this past Saturday, the insurance company found us a rental house (furnished) that was available for 2 months, so that’s where we are now. After that, who knows. It’s possible (though no one is holding out much hope for this) that the house will be done by then. If not, we just might end up back in the motel. Time will tell.

Tips on long-term hotel living will be coming next week. Hopefully you won’t find yourself needing them, but just in case…