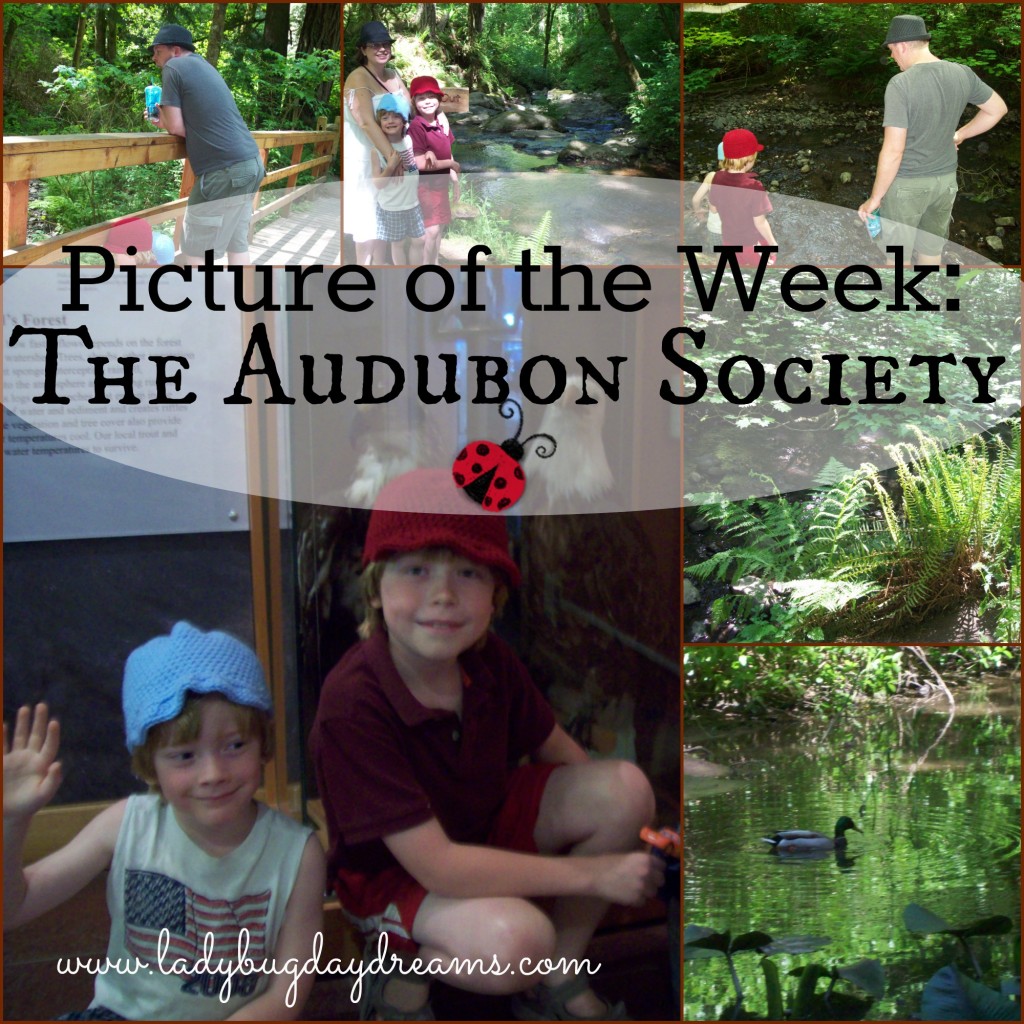 These pictures, in case you can’t tell by looking at my children in them, are quite old. Way back before Small Fry was born, we took the boys to the Audubon Society in Portland and enjoyed a couple of hours of walking the trails and viewing some of the natural wildlife. It was really neat, and the kids loved it. I think they’d actually forgotten about it (even though they loved it at the time), but when I was pulling photos off of the camera this week, I found these. They’d somehow ended up on the actual camera rather than on the memory card, so they didn’t get moved during the multiple times I’ve moved pictures in the intervening years. It’s always fun to see what they looked like so long ago :).

Two weeks ago, Munchkin’s glasses broke. The arm broke off. Fortunately he qualified for a new eye exam (and subsequently new glasses) on Tuesday the 4th, which was only four days after the break. I was able to get him an appointment on Wednesday the 5th, and by this past Tuesday, he could see again 🙂 .

We don’t get much snow where I live, so when it happens, it’s a big deal. Especially the amount of snow we’ve gotten the past two days. It’s crazy! We don’t have a TV, and I don’t spend that much time researching weather forecasts (this close to the coast, they’re usually wrong anyway), so the snow seemed to come out of nowhere. It started snowing around 10 yesterday morning, and it hasn’t stopped! The last time we got this much snow was in December of 2009. It’s better this time around, though, because we have the dry, powdery stuff. In ’09, it was a very wet snow, and we got around 12 inches, then it rained for a day, then it snowed again. So we had several inches of snow, a layer of ice a couple of inches thick, topped with more snow. You can imagine how awful that was! But this year, it’s just cold, not awful, so the kids have enjoyed playing in the winter wonderland they only see once every few years.

It was Small Fry’s first snow, so it’s been fun watching him watch out the window as the flakes fall from the sky, and this morning, we let him out in it for the first time (he and I had already gone to the store before it started yesterday, and I’m not much of a snow person, so I didn’t take him out yesterday). That’s the picture on the upper right. The lower right is Small Fry wearing Seahawk’s snow jacket. Too cute!

Is your winter wonderland as white as ours??

This fun riding toy is at our church. We spend a lot of time there, and on this day, Seahawk was pushing Small Fry around the hallways (we were the only ones there – hubby has his office at the church while we’re painting his home office). Small Fry was having so much fun!

As for not having any posts this week, I just couldn’t think of anything, and it didn’t seem worth it to try to come up something mediocre instead of waiting for something good to write about.

A Friday ritual. A single photograph – no words – that a capture a moment from the week. A simple, special, extraordinary moment. A moment I want to pause, remember, savor.

If you’re inspired to do the same, leave a comment with the link for all to find.

Wishing you blessings this weekend.

A Friday ritual. A single photograph – no words – that capture a moment from the week. A simple, special, extraordinary moment. A moment I want to pause, savor, remember.

If you’re inspired to do the same, leave a link to your “moment” in the comments for all to find.

Have an amazing weekend!

We picked the kids up from Club Mud on Tuesday (more on that here) and hubby and Seahawk put Small Fry down in the grass, expecting – at least on hubby’s part – that he would hate it. Well, he didn’t. He loved it. So they helped him walk until we got to the sidewalk. Small Fry is still shoeless (I don’t believe in putting shoes on kids until they walk outside often enough to need them), so he had to be carried once we hit the hot pavement.

It won’t be long now until Small Fry is walking on his own. All he needs is confidence.

Happy Mother’s Day to all who are moms. May God richly bless you and your families.

As you may (or may not) know, my hubby draws comics. Not Spider-Man style, Calvin and Hobbes style. He also writes and illustrates picture books (written for adults but kids also enjoy them). Selling his books is how we make most of our living. As a side business, he also does book layouts for people (taking the word document and/or illustrations and getting it/them ready for the printer). Anyway, today’s pictures are all about his drawings. A little back story first, though.

The way he sells enough books for us to live off of is by going into locally owned grocery stores and doing a “book signing.” Basically, he sets up a table and some books and sells them girl-scout-cookie style. Back in December, a rep from Smart Car bought one. About a month ago, he (the rep) emailed hubby inviting him to be part of the “Art Your Smart” event in Portland. Basically, hubby gets to spend the day (yesterday and today) drawing all over a Smart car white-board style.

Here are the four sides of his creation:

Warning: DO NOT TRY THIS on a regular car. White Smart cars are made out of a material that will dry erase with expo markers. Regular cars are not. I take no liability for any drawn-on cars.

Have a blessed weekend! And Happy Cinco de Mayo for any who celebrate it :).

I actually have 2 for you guys today, both featuring Small Fry.

This was only his second time in a swing. Because he was born in July, he was too little to play in one last year, and then it got cold and rainy. It’s finally nice enough that we can go to the park again :).

Last night, we had my brother and sister-in-law over for dinner, along with their two sons. The two babies (Small Fry is 9 months old, and his cousin – though bigger than him – is 7 months old) played together too beautifully not to document photographically :).

Have a wonderful weekend!