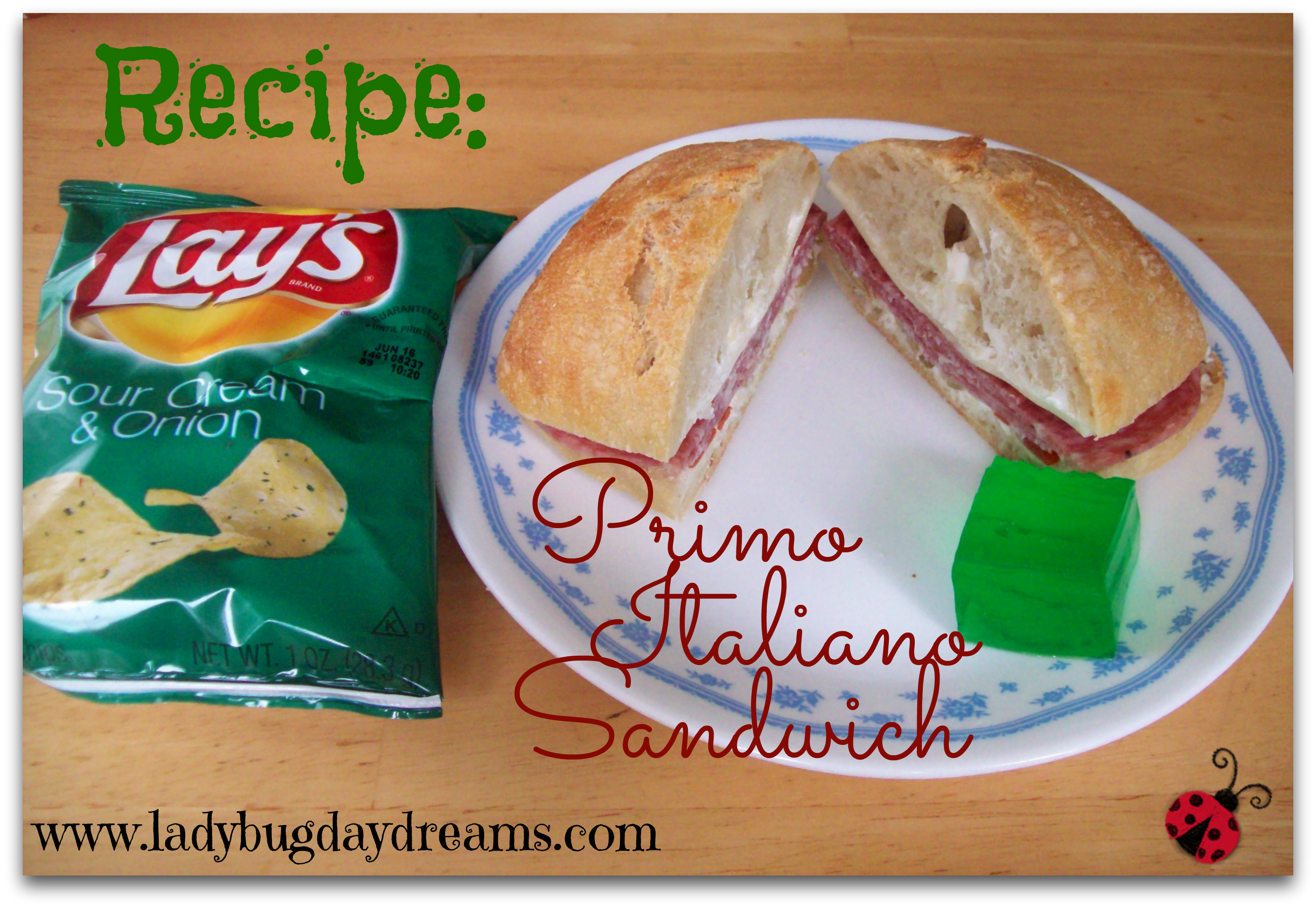 Sandwiches are tough in our home. Everyone likes something different. But the one we can all agree on (except maybe Small Fry, who’s still in the “peanut butter and jelly or bust” stage) is this: The Primo Italiano.

Back when Will and I were first married (when we both worked outside the home, before he was self-employed or we had kids), one of the local grocery stores – the one we worked for – decided that they wanted to compete with the sandwich shops, so they installed sandwich bars in all the delis. They had several prefab sandwiches to choose from, but you could also “build your own” like at Subway. One of the prefab sandwiches was this one, and it quickly became our favorite lunch.

Unfortunately, they discontinued this sandwich after a few years, so I’ve developed this copy-cat recipe so we wouldn’t miss out on one of our favorites.

I’ve been pretty specific about things like the bread, but you can use any kind you like. I would not, however, recommend anything too soft. You want something with a good crust to help hold everything together and give you the right texture to your sandwich. French bread is about as soft as I’d go with this particular sandwich; definitely do not use regular sliced bread. With the olives, if you don’t like green, go ahead and visit your local deli and choose something fairly exotic that you like. But don’t use regular black olives. They won’t have the right flavor. Outside of that, it’s pretty flexible. You can use whatever kind of salami you like, in regular or low-fat. Same with the cream cheese.

Some days you cook simple stuff (spaghetti with jarred pasta sauce, for example). But sometimes you really just want to cook, if you know what I mean. And as we move into the cooler months, those times seem to be more and more. It’s easy to “phone in” dinner in the summer when it’s hot and all anyone wants is salad anyway, but we crave warmer, heavier foods in the winter. Today I have a recipe for you that gives you that warm, real-cooked feel, but isn’t actually too heavy. I found the base recipe at AllRecipes, but I’ve modified it to make it my own. END_OF_DOCUMENT_TOKEN_TO_BE_REPLACED

Sandwiches are not a simple meal in my house.

We have lunch together most days, because hubby works from home about half the time. Most of the time, I cook a dinner-type meal, just in a slightly smaller quantity, for lunch. But sometimes we have sandwiches. And everyone has a different preference for them.

Seahawk prefers egg salad. Interestingly enough, he hates eggs, but egg salad is his favorite sandwich. I have no idea how that works.

Small Fry typically eats whatever we give him. Sometimes I make him a tiny grilled cheese sandwich, sometimes it’s just some of the filling from the other sandwiches.

I usually buy the sourdough rounds for this sandwich and use the smaller, outer pieces for the kids’ sandwiches and the bigger ones from the middle for the paninis. First thing to do is spread some pesto all over one side of each slice of bread, much like you would mayonnaise or mustard for a cold sandwich. Put a few peppers over the top of the pesto (any kind you like – I usually use pepperoncinis or banana peppers), and then some cheese (again, whatever your favorite is – I use cheddar). You can use sliced cheese or shredded; I happened to have shredded on hand the day I took the pictures, so that’s what’s there.

Next, put your meat on top of the cheese. I usually slice up a chicken breast and cook it while I’m prepping the bread, but you could easily do it with lunch meat.

Then, cook the sandwich just like a grilled cheese sandwich with one change. You have to squish it down. The texture of the final product is off if you don’t. If you have a panini press, you’re way ahead of me! I just weigh mine down with a cast iron skillet. Remember to put some kind of fat on the outside of the sandwich for browning purposes. You can spread butter, but what I do is spray it with non-stick cooking spray. I find that works just as well, if not better, and is way easier.

What’s your favorite sandwich? If you don’t like sandwiches, what’s your go-to lunch option?

We ran out of ketchup last week, and as I was writing the word on my grocery list, I thought, “I bet I could make that.” So I looked online and found a recipe that took two hours instead of two days and bought the ingredients instead of a bottle of premade. It was a bit more expensive this time because I only had about half the necessary spices, but next time it will be super cheap :).

So here we go. Recipe courtesy of JS Online.

Blend the tomatoes, with their juices, along with the onion and garlic (half at a time so as not to overload your blender) until smooth. Pass the liquid through a mesh strainer, pressing with the back of a spoon as necessary. Discard solids.

*I don’t have a mesh strainer, so I skipped this step, and my ketchup is still delicious. It’s just not as smooth as factory ketchup. So know that if you opt out of this step, your ketchup won’t be ruined.

Pour tomato mixture into a saucepan and bring to a simmer over medium heat.

Continue simmering until it’s reduced by half. This will take 1-2 hours.

Meanwhile, combine all other ingredients in a second saucepan and bring to a boil. Stir to dissolve the sugar and turn off the heat. Let it sit while the tomatoes continue to reduce.

See that black line in the middle? That’s my vinegar mixture :).

Continue to simmer the ketchup, stirring occasionally (but be careful not to let it burn!), until it is thick. This will take about 20-40 more minutes.

Taste for salt and spice, adjusting to your liking.

Let cool, then transfer to jars. The ketchup will keep in the fridge for 2-3 months.

I got 2-16 oz jars (a repurposed Alfredo sauce jar and a new jar). And let me tell you, this stuff is delicious! And the best part is that you can adjust it to your family’s liking. For example, I left the cayenne out altogether, but if you like spice, you can totally use more. It’s a wonderful recipe. It does take some time, but it’s not all hands-on time. Pay enough attention to keep it from burning, but other than that, it practically cooks itself.

I hope you “take the plunge” and try your hand at homemade ketchup once you run out of the commercial stuff :).