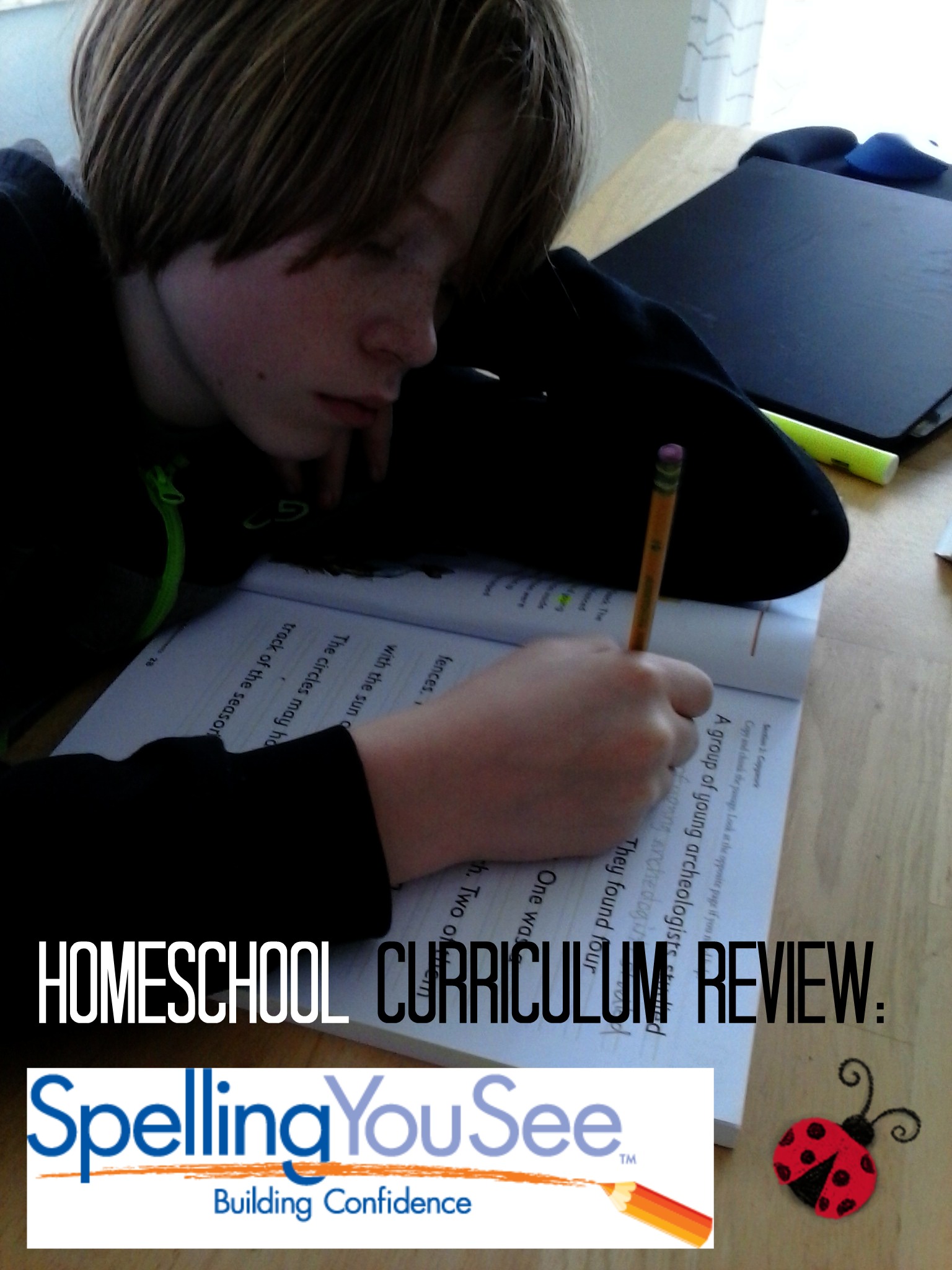 I spell well naturally. I always have. So does Will. And Munchkin (age 8). But Seahawk (age 11) struggles. So I’m always on the lookout for a spelling program for him that will help him learn HOW to spell (not just provide him with a list of words to memorize, test on, and forget). That’s what the goal of Spelling You See is.

The second half of the program is a combination of copywork and dictation. For the first three days each week, the student copies a portion of the passage (roughly half of it, in an A-B-A pattern). On day 4, the parent/teacher reads the passage aloud, and the student writes it down, doing their best to spell everything correctly. During day 4, the student is “allowed” to ask for help with spelling the words if they need it. On day 5, the student works from dictation again, but the goal this time is to avoid asking for help. Hopefully by working the passage four times before this, the student will remember the letter patterns. The teacher’s manual instructs you to work through dictation for no more than ten minutes per session. Whether your student finishes the passage during this time or not is irrelevant. The goal is to work through as much as possible without overwhelming your struggling speller.

The physical student books you receive in the Spelling You See curriculum are “open and go”; there’s no prep work required. When you purchase the program, there are two elements you need. The first is the student books. For a price of $30, you get two student books (enough for a full year of spelling curriculum) and a packet of Crayola erasable colored pencils to use for chunking. The student books each contain 18 five-day lessons. Each individual lesson takes up a two-page spread in the workbook (one page for finding the chunks, the other for copywork/dictation, depending on the day). The second thing you need is the teacher’s manual, which costs $14. While you might be tempted to skip this purchase, I don’t recommend it. Sometimes those chunks are tricky to find because our brains skip right over them (the “th” in “the” is considered a consonant chunk, for example, because it’s two consonants that make one sound; it’s so ingrained in our heads as just “the,” though, that it’s easy to miss), and you’ll want that teacher manual to help you help your student.

The program is designed to be used 5 days a week for the entire school year. A few weeks ago, we adjusted our school week to run four days a week because we found we were spending all day on Monday running errands and we ran out of time for school. Instead of feeling bad about that, we rescheduled our subjects to make them work on a four-days-a-week schedule. Spelling You See was no exception. Since day 3 is essentially a repeat of day 1, that’s the lesson we skipped. This means we did Monday’s lesson on Tuesday, Tuesday’s lesson on Wednesday, and then Thursday and Friday lessons on the “right” days. The lesson page for Wednesdays contains an extra piece of information (tidbits about word roots, for example) that isn’t on the other days, so we made sure to read that on another day so as not to miss out.

As for what we think about Spelling You See? I like it. I like the open and go format, I like how it teaches students to notice letter patterns that are common in the English language, and I like how easy it is to implement. I especially like how the focus is on how many words the student spells right, not on the words they missed. (At the end of each dictation day, you count up the correctly spelled words and record that number at the bottom of the page.) Seahawk, on the other hand, does not like it. But that’s just because it’s hard for him. He’s not a good speller, remember? He has to work at it. His dislike of the program doesn’t mean that the program isn’t good; it just means that it’s not easy for him. Like most kids, he’d rather play than work, and Spelling You See is work for him.

As we work through our second year of using Spelling You See (I reviewed Level D: Americana last year), I hope to continue to see improvement in his spelling. At the moment, it’s slow in coming. But I am seeing some advances. I just hope it continues.

To read about other homeschool families’ experiences with Spelling You See, click the banner below. There are 40 of us on this review, and some reviewed Level F like I did, while others worked with Level G.

I have one child who is a naturally good speller (like my husband and me), and one who definitely is not. When I heard that Demme Learning, the company that gave Math-U-See to the homeschool world, was introducing a spelling curriculum, Spelling You See, I knew I needed to try to get on this review for Seahawk’s sake. Writing and creating are very important to our family, and his poor spelling skills were really hindering him in some major ways. It was to the point of being difficult to read some of his original writings because he spelled 100% phonetically. That’s okay for some words, but as a general rule in English, you can’t rely on phonetics to get you by.

There are 5 levels of Spelling You See curriculum (each assigned a letter), and we got the fourth level up, Spelling You See: Americana (Level D). The levels are assigned mostly based on your child’s age, but reading level is taken into account a little bit, too. You can start Level A with really little kids; as soon as they start to learn that “letters make sounds and sounds make words,” they’re ready for Spelling You See. The higher levels of the program are designed specifically for elementary-age kids, but can also be used as reinforcement for students who need remedial work. That said, the program is not based primarily on your child’s grade level; rather, you work with them, and as they master the concepts from one level, you can then move them up as you, the parent and educator, see fit. There are guidelines given by the company to help you establish on which level to start your student, and then you can move them on from there.

In Americana, your child is given a paragraph to work with. They work through the same paragraph – which are little snippets of American history – every day for five days. There are different “chunks” your child is assigned to find within the paragraph, and each kind of chunk is given its own color. Vowel chunks (any two vowels in a row, as well as a vowel followed by a Y or a W) are colored in yellow. Consonant chunks (any two consonants that work together to make one sound – th or ch for example) are blue. “Bossy R” chunks (a vowel followed by an R, because that R changes the sound the vowel makes) are purple. You get the idea. The idea is to teach the child that certain letter combinations make certain sounds, and that when they hear those sounds – in their heads as they’re writing or verbally during a spelling activity – they can assign the correct letter combination to the sound.

After the child has found all the chunks for the day (which chunks they’re supposed to find vary based on the lesson; during the first two weeks of a specific kind of chunk, it’s just it on its own, and then after that, they start combining them into the same lesson), they move onto copywork. The first three lessons, the child is expected to copy down the passage, limiting the time spent to 10 minutes. No more. The idea is to help your child be a better speller without making them hate the experience of learning how. The last two days of the week, you read the paragraph to the child, a little bit at a time, and have them write down the words. This is dictation in lieu of the copywork; they’ve had three days to get familiar with the words, so then they’re going to see how many they can spell correctly. On day 4, they’re allowed to ask for help, but day 5 is kind of the equivalent of the “end of the week spelling test” (but don’t ever really call it that!) and they’re supposed to just try to write the words on their own as you read them. I think the best part of the dictation on Day 5 (Lesson “E” each week) is that the workbook has a place to record how many words your student spelled right. Not wrong, not a percentage, not “this many out of this many.” How many they got right. We found that to be a huge encouragement for Seahawk. He was thrilled when after the very first week he was spelling so many words correctly.

Dictation work for Lesson 5E. The arrow at the bottom emphasizes the idea of correct words.

Spelling You See: Level D: Americana is in the form of a Teacher’s Manual for you ($14) and a pair of workbooks for your child ($30 for both). (Pricing varies from level to level.) Each student workbook has 18 five-day lessons, so one set of the books will get you all the way through the 36-week school year. All the books are softcover, and the student workbooks have perforated pages in case you want to tear them out for whatever reason (I didn’t). The student books are perfect bound, while the teacher manual is saddle-stitched (stapled).

The program is designed to be used five days a week, and that’s exactly what we did with Seahawk. He needed this program so badly, that even on the days we didn’t do a full day of school, I still was really strict with him on getting his Spelling You See done.

And you know what?

This program really, truly works. I could tell after the very first week that it was working, and now that we’ve been using it for seven weeks, the difference in his spelling is drastic. Spelling was one of the hardest things to get him to care about; he’d pretty much just accepted the fact that he was a “bad speller.” But not anymore. He’s got the confidence to write more. He doesn’t ask for help with spelling as much anymore – and not because he’s given up. Because he’s spelling the words correctly! His spelling in the other subjects is slowly starting to improve as well. It’s not quite as strong as his spelling with the Americana paragraphs, but to a certain extent, that’s to be expected. He is, after all, writing the same paragraph five times a week.

He’s still got a long way to go, but with this program, he’s well on his way. And I definitely hope to buy Level E: American Spirit for him when he finishes up Americana. What better praise is that?