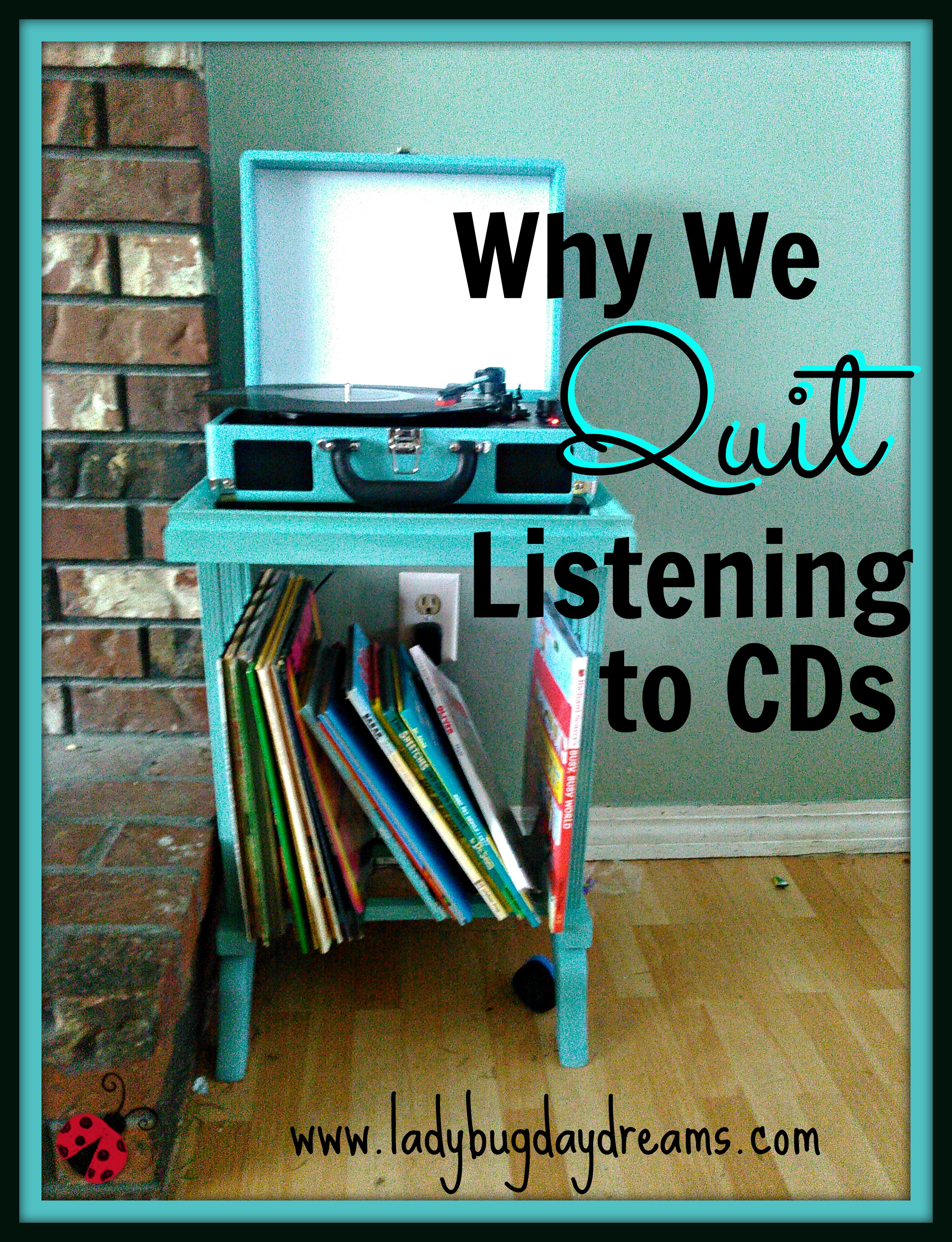 I lightly touched on the fact that we’ve been listening to vinyl records instead of CDs or mp3s recently (in a 5 Random Things post). Today, I want to discuss the Whys of that decision and what we’ve learned/observed in the weeks since we switched.

Let me preface this post by saying that I am not a music person. At all. I could easily give up music and not even think twice about it. I don’t like the oppressive feeling I get when it’s playing (especially in the car). I hate the inability to escape it when Will or the kids are listening to it in the house.

So when Will came home one day before Christmas with a record player, I was skeptical. For one thing, it would be a bigger item taking up space in the house. For another, because it was “new” and “different,” I knew they’d want to listen to music all the time. And finally, it seemed silly to me to have a new medium of playing music – specifically, one that didn’t work with the way we already owned music (mp3s, mostly). It would require us to buy – or rebuy – music, which wasn’t something I was all that interested in doing. But Will wanted the turntable, so he bought it. Along with one new record and a few used ones.

After just a few days of having the turntable, I was mostly a convert. Enough of one, anyway, for Will to decide he wanted another turntable – one for “me” to have upstairs (where the main living areas of our home are) and one for him to keep in his home office downstairs. So we went to the store to see what they had in the record-player category. (We knew they’d have something because it was the same store where he’d purchased the first one. It was just a matter of seeing what more/other options they had since it’d been a couple of weeks.) When we got there, we found the player in the picture up above. We were taken aback by just how perfectly that one would complement our living room decor. We already had that blue table – with no real plan for what to do with it – and we knew that when we saw the blue-cased turntable that it belonged in our house. It was the only one in that color left, and a little more expensive than its black counterpart, but we wanted the blue one anyway. So we got it.

And now that we’ve had the permanent one for the living room for a few weeks, I can honestly say that I am a full convert now. And here’s why.

There’s a bit of “ceremony” with each play of a record.

You can’t just scroll through your digital catalog and start the music with the tap of a button. You have to very deliberately choose what you want to listen to, remove it from its sleeve, place it on the turntable, turn the player on, and place and drop the needle. While it’s not a complex process, it is a process, and it’s not something you just decide to do willy-nilly.

When you forget about the background music, it will eventually end.

This is a big one for me. Remember before, when I said that I don’t really like music because it’s difficult to get away from when someone else is listening to it? Well, a big part of that is because with CDs and mp3s, the player will oftentimes just keep going and going and going forever and ever until you (or someone else) eventually realizes that it’s still playing and turn it off. This isn’t the case with a record. With a record, you get about 5 songs – 20 or 25 minutes – max. Then it stops. It doesn’t stop spinning, but it stops playing when the needle gets to the middle of the record. And then you have to make a conscious choice to restart the music. This is perfect for someone who likes music in small pieces rather than as constant background noise.

Will likened it to the difference between watching a movie and turning the TV on in the morning and leaving it on in the background of you life until you go to bed each night. We are definitely “movie” people (we do watch TV shows, but we do so in a movie-like way, by choosing what to watch and when – thanks to streaming services – rather than being roped into the network schedules). Our TV spends more time off than on, and we like it that way. A record player is the same. You have to decide to listen to something. It’s not a medium that lends itself to constant, repeating tracks.

The musical choices are different.

This might be more of a con than a pro to some people, but not to us. The musical choices available when you listen exclusively (or almost exclusively) to vinyl, the choices are very different. Some of the new artists release their music on vinyl (I’ve seen Adele and Taylor Swift records in the record store, as well as David Bowie’s new release, among others), but not all of it. And there was a time in the 90s when, apparently, none of the music was released on vinyl. (That’s pure supposition on my part. I don’t know if it’s true or not, but I’ve not seen any albums from that time frame in our searches.) Very little Christian music is available on vinyl.

But lots of music from the 60s, 70s, 80s, and earlier are available. So that’s what we mostly listen to these days. Some of our favorites that we’ve found and purchased used are Famous Marches of John Philip Sousa, The Nutcracker Suite, Rossini Overtures, and The Wizard of Oz soundtrack. These are things that you’d probably be pretty hard pressed to find on CD. Someplace like Amazon probably has them on mp3, but given a choice between Sousa and Adele, what would you choose? Most people would pick Adele. But that’s not necessarily the case with records. You choose things that you might not otherwise select if the choices were the same.

So, this is why we’ve given up on CDs and mp3s (for the most part). There’s a lot more I could (and will) write about the act of owning records, but this post is already pretty long, so I’ll save that for another day. 🙂

Leave a Reply to annette @ a net in time Cancel reply