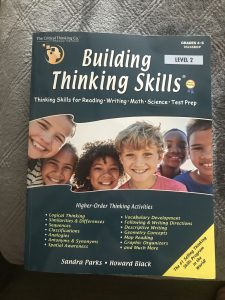 The Critical Thinking Co.™ has been a staple in our homeschool for as many years as we’ve been on the Review Crew. They’re a family owned company that’s been around since 1958 and are now run by second-generation owner Michael Baker (his father, John Baker, founded the company, but has since passed away). They offer a large variety of books for homeschool students, in all the major subjects. The difference in The Critical Thinking Co.™ is that they put the focus on learning to think through the problems rather than simply mastering formulas. All of their books, regardless of subject (and they cover everything!) have that spin to them. This year (specifically, for the past few weeks), Grasshopper (4th grade) and I have been using Building Thinking Skills® Level 2 -Grades 4-6 (Ages 9-12).

The book is huge! It’s nearly 350 pages of activities, plus an answer key, and printed in full color. It covers thinking skills in reading, writing, math, science, and test prep and is broken down into ten chapters. The first four chapters would make a great supplement to any math curriculum. The next two are science-focused, and the final four cover reading and writing. Test prep thinking skills are sprinkled throughout. 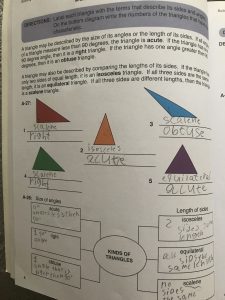 Grasshopper and I have been focused primarily on the math chapters for now. These worksheets are well balanced in their content, and even though I would consider this a supplementary book rather than a full curriculum, he has learned quite a few things that were completely new to him (the three types of triangles, for example). Most of the activities that we’ve done (and a lot of those we haven’t, as I look through the book to write this review) are based on shapes. Shapes are great for teaching critical thinking skills in math because they can move, twist, and fold so many different ways! The book does a great job of making students really evaluate and think through the answers, especially in activities such as “if you were to fold up this shape on the dotted lines, what 3D shape would you make?” That was a tricky one for my son!

Once we move on to other chapters, Grasshopper will be doing activities such as “explain the exception,” where the student is given four words. Three of them have something in common and one is related but different (for example, cloud, rain, snow, umbrella). Students have to explain the three that are the same and then also tell why the odd one out is different AND how it relates to the other three.

The science chapters deal a lot with describing things. Students take the observations they make through their descriptions and write sentences to describe the item (which varies from animal to food to occupation and more). There are also activities where they are given a description and they identify what is being described. As they progress through the chapter, they start identifying and describing smaller and smaller pieces of things (there’s an entire page devoted to parts of an ant, for example).

The reading and writing chapters feature a lot of analogies, which are amazing test prep questions. On some pages, students complete the analogy; on others, they explain it.

Overall, Grasshopper has really been enjoying the math portions of this workbook. He works hard to understand the concepts, and he has been learning a lot. One caveat: even though these appear to be standard workbook activities on the surface, you might find that they take a bit longer than average due to the heavy thinking skills students are developing as they work through the activities.

You can read more reviews, featuring a variety of books from The Critical Thinking Co.™ on the Homeschool Review Crew website.