Well, here we are, another month down. Only 18 weeks to go!

I had what’s called an “anatomy scan” for baby on July 6th. This is where the doctor (in my case; sometimes it’s an ultrasound technician, who then sends the results to the doctor) performs an ultrasound, the main point of which is to measure baby’s internal organs and overall size to make sure everything is going as it should. It’s during this scan that a lot of parents find out the gender of their little one, as well. (With Seahawk and Munchkin, we opted not to find out gender. With Small Fry, we decided at the last second to find out. This time, we’d decided well in advance that we wanted to find out.)

The ultrasound went very well. We were able to see a wiggly baby whose body was developing perfectly. There were two clearly visible hemispheres of the brain, and four fully-functioning heart chambers. Also, the doctor said she was able to make out perfectly working kidneys – I couldn’t really see those, but she assured me that “if you can’t see them, that’s a good thing.” We were told that baby weighs about 10 ounces at this point (well, probably more now since this was a week and a half ago). I’m not 100% sure, but I think that’s on the small end of normal, which would be about right for me. All three boys have been fairly small at birth – Seahawk was the biggest at 7 lbs, 10 oz (the exact same weight as both my brother and me), Munchkin was the smallest at 6 lbs, 3 oz (he was an emergency c-section 11 days early), and Small Fry was 6 lbs, 8 ounces (a repeat c-section one week early).

Once all the important measurements were taken, the doctor looked for the gender. It took her a long time to see – baby was being pretty stubborn. None of that wiggling going on was in the “hey, let me show you my gender” kind of moving. After several minutes of looking and pressing on my tummy to get baby to move, she was finally able to see “the goods.”

We’ve already chosen his name, but I won’t be sharing that here on the blog for security reasons (just like I haven’t ever shared the older boys’ names, lest you think we’ve given our children crazy names like Seahawk, Munchkin, and Small Fry). So if any of you have ideas for a “blog name” for our new addition, I’m happy to hear it!

Once we knew that baby was healthy, and the gender, it was time to tell all of our extended family. We’d decided to buddy up the announcement with Small Fry’s birthday party since everyone would be around anyway. For his birthday party (which was Saturday the 11th, one day before his actual birthday), we had a bbq for the grandparents, aunts/uncles/cousins, and a few other extended family members. Once everyone had eaten, we did a pinata. Small Fry was so excited for this! 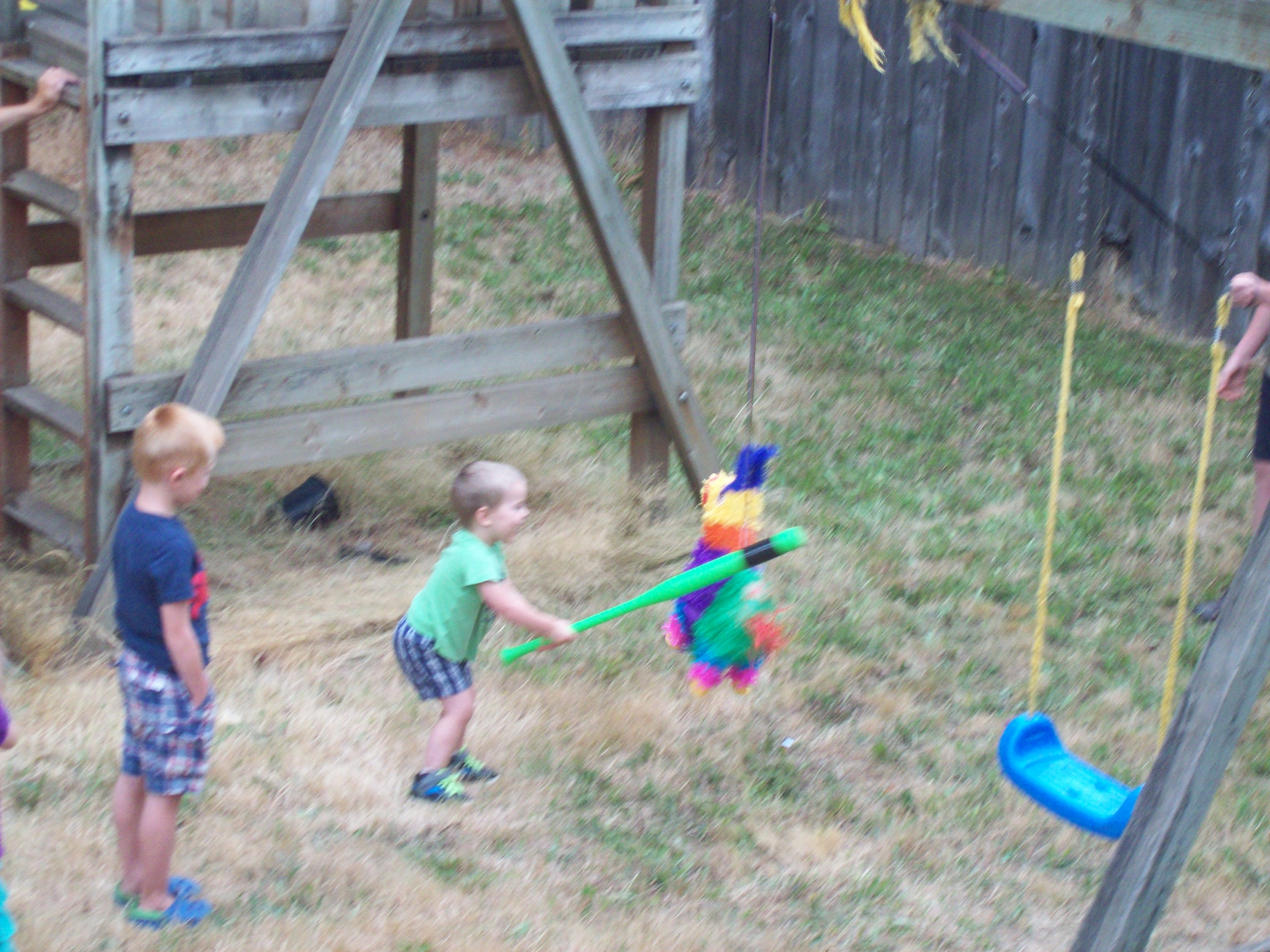 We let him choose the pinata he wanted from the store earlier that week (he chose a donkey), and Munchkin and I filled it with candy and blue confetti. At pinata time during the party, I was so proud of Seahawk. He volunteered to run the pinata instead of hitting it since he was so much older than all of the other children who would be playing the game (the oldest cousin is 6, almost 7, and she’s very tiny). 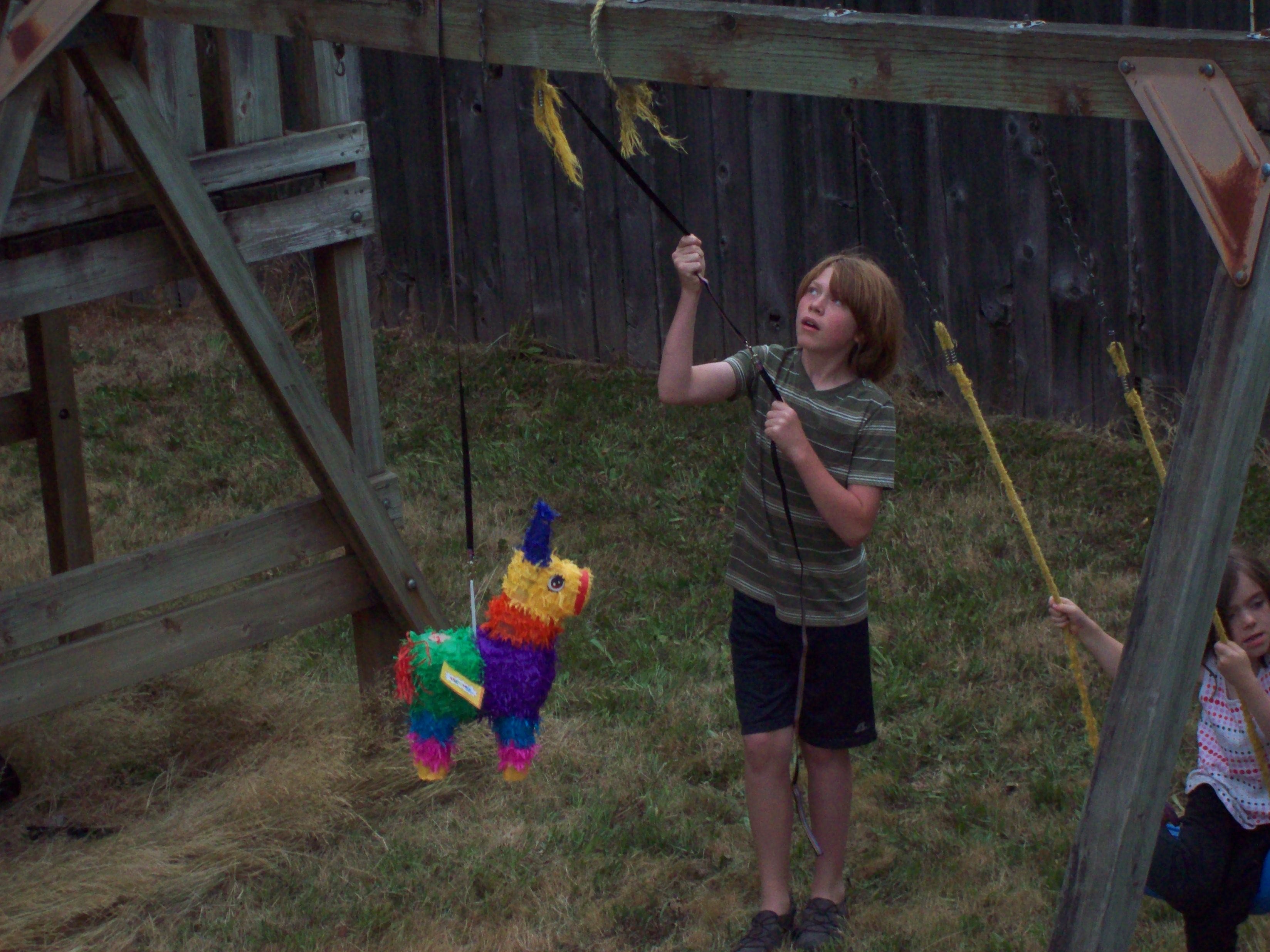 It took about twice through the line (six kids played) before the pinata broke open and the candy and confetti rained out. Everyone was very excited – the children for the candy, the adults for the “it’s a boy” announcement. 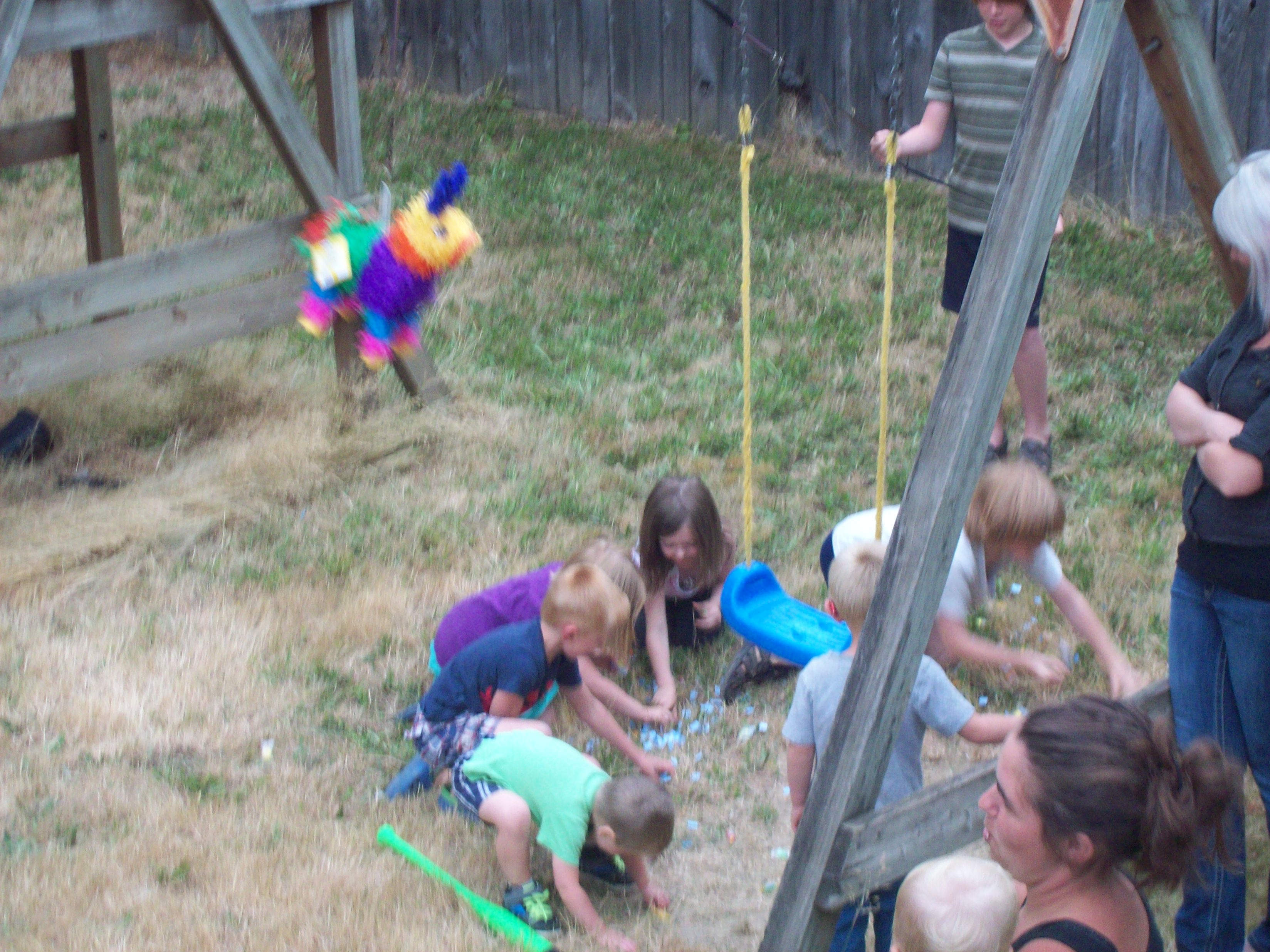 Once the pinata was done, we did Small Fry’s birthday gifts and cupcakes. Overall, it was a very successful party.