My favorite classical composer is one who is often forgotten these days: Gioachino Rossini. He was a master of opera in his day, writing over 35 operas in barely 20 years. When I was in high school concert band, we played a few of Rossini’s overtures (the part of the opera that the orchestra plays before the actors come on stage – the “opening credits,” so to speak), and my very favorite one was L’Italiana in Algieri – The Italian Girl in Algiers. The piece was difficult, but once mastered, it was so beautiful that it quickly became my favorite, and remains thus to this day. Outside of the overture, though, I knew nothing of the rest of the opera.

A few months ago, we looked up Rossini operas, thinking that it might be something we’d (well, I’d) enjoy since I already love his music so much. The closest one was in Paris. That’s a bit far for a date, so we tabled the idea for a while. Then randomly a few weeks later, Will checked again, and guess what? The local opera house was doing a Rossini. But not just any Rossini opera… The Italian Girl in Algiers. We bought tickets about a month out from the event, and anxiously awaited the date. 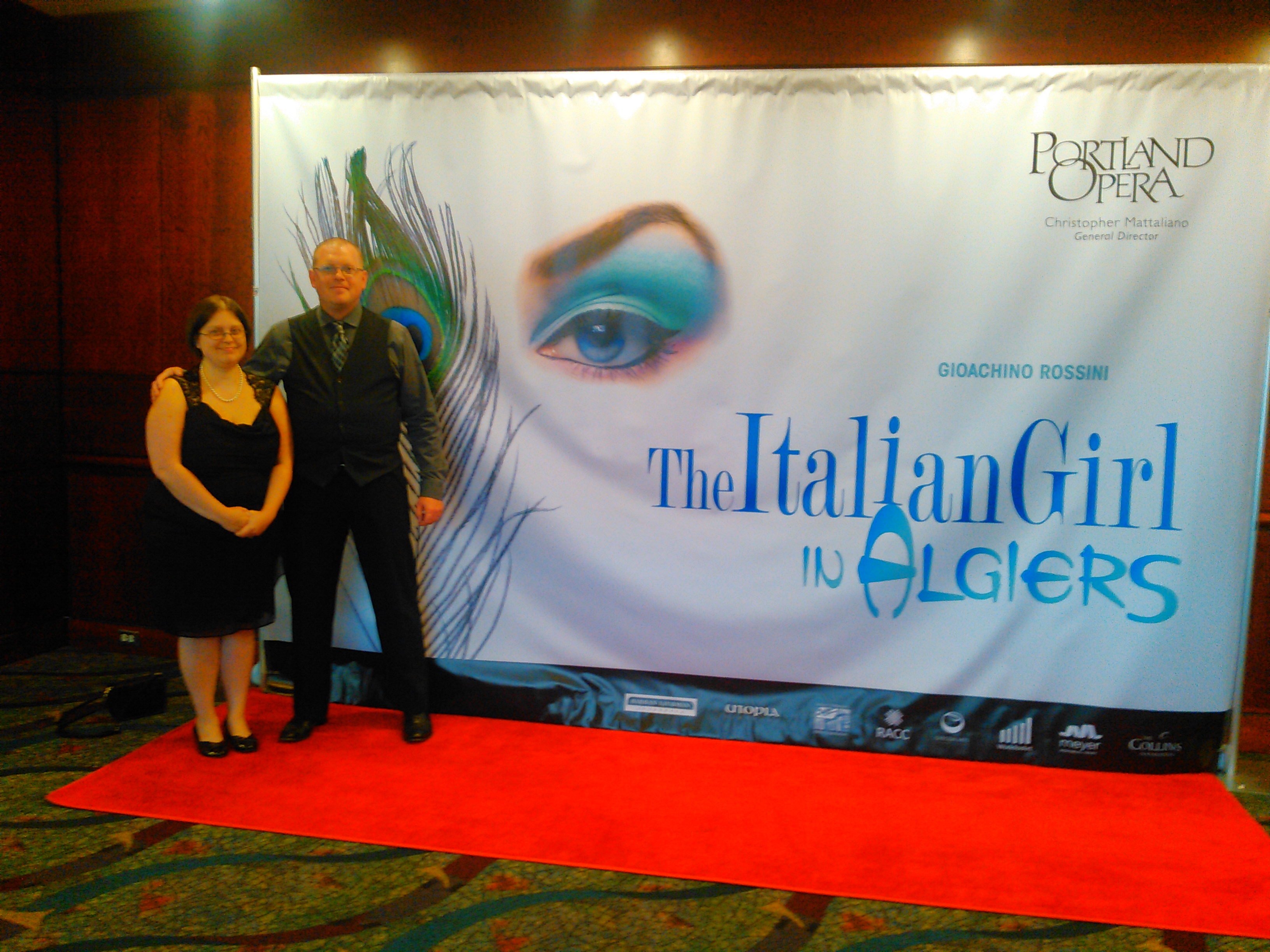 When the time came, we left the kids with a babysitter (Seahawk is capable of babysitting, but we didn’t want to pressure him by leaving him alone with the littles – especially the baby – for so long by himself) and left for our date. We dressed in our formal clothes and had dinner at one of our favorite places. Then we headed into the big city for the opera. We arrived in time for the pre-show, which was quite interesting. It was a college professor giving a speech on both the composer and the opera. She also explained a bit of the director’s vision for this particular rendition so we wouldn’t be taken aback. (It was an interesting blend of current and timeless.) After the pre-show, we headed up to our seats – officially the “worst seats in the house.” To stay on budget, we were seated in the very back row of the second balcony. Our seats were a tiny fraction of the cost of anything on the orchestra level. Even though we were so far away, though, the way the theater was set up, our view was still great.

The story of L’Italiana in Algeiri is one based in reality in that it takes place during the early 1800s when the countries of northern Africa were taking Italians captive as slaves. The opera opens with Elvira, the wife of the Bey (king), in despair that her husband no longer loves her. Mustafa, her husband then comes in and confirms her laments; he talks to Haly (his servant) and tells him that not only is he tired of his wife, but he’s also tired of the rest of his harem. He wants Haly to find him an Italian girl. Haly is given six days to accomplish the task. All of these characters exit, and Lindoro (an Italian captive, and my favorite character) comes in to clean up the mess. He sings an aria about his lost love, Isabella. Mustafa comes in and tells him that he’s got a wife for Lindoro – the queen, Elvira. They have a comical duet where Lindoro tries to explain that he doesn’t want a wife because he loves Isabella, but Mustafa convinces him that the woman he has in mind for Lindoro is wonderful in every way.

The scene changes after Lindoro’s aria, and we meet Taddeo and Isabella, Italians who have been captured by Haly and his men. Haly is sure that Isabella is the perfect Italian girl for Mustafa, so he has kidnapped her and is taking her to be the king’s new woman. Taddeo, Isabella’s lover, is captured simply for having been with Isabella at the time. To keep both of them safe, they decide to pretend to be uncle and niece rather than lovers. The first act ends with a huge number featuring all of the characters singing about their various situations – Elvira mourning the loss of her husband, Lindoro and Isabella shocked at the sight of each other, Taddeo still trying to figure out what’s going on, and Mustafa and Haly talking about how perfect Isabella is for the Bey.

The second act focuses on Isabella’s plan to escape with Lindoro (you see, she was THE Isabella he sang about during his solo). At the same time, Mustafa makes Taddeo his “kaimakan” (kye-mah-kin) – essentially a made-up title meaning “second in command.” Taddeo is given a new uniform to wear to denote his position, and he asks Mustafa if he was given this position simply to impress Isabella, whom the king has decided he loves. His answer is a resounding, “Of course!” Meanwhile, Isabella and Lindoro come up with a crazy idea to distract the king so that they can escape together back to Italy. They will tell the king that Isabella wants him to be a “papataci” (pa-pa-tah-chee). This is another made-up title, and it means that the king will join the ranks of Isabella’s own male harem (basically). His job as a papataci will be to eat, drink, sleep, and enjoy Isabella’s company. He readily accepts, and the plan is in place. Lindoro keeps Mustafa occupied while Isabella plots their escape. The opera ends with Isabella telling Mustafa that she and Lindoro are leaving and that he should get back together with his wife. And they all do just that.

Prior to attending this opera, I had no idea that some operas are comedies, but this one definitely is. There are so many funny parts (and my summary didn’t really do justice to any of them). While L’Italiana was produced by the local opera house here, very few of the main players are actually from around here, which actually made it feel even more “legit” than it already did. The cast and crew hailed from all over the world (the man who played Mustafa is from Cairo, Egypt), including the director, who is German.

I’ve rambled on far too long for one post already, but I have more I want to say, so I’m going to add more in a post next week. The focus of that one will be “why I think you should go to the opera (and take your kids with you).” I hope you’ll join me for that one.