We have been big fans of YWAM Publishing over the years. We’ve reviewed books from both of their biographical series, Christian Heroes Then and Now and Heroes of History. This year, they offered members of the Homeschool Review Crew books from the Christian Heroes series, and I chose Jim Elliot: One Great Purpose for us to read.

I didn’t grow up in the church; I started attending when I was about 13. But I spent a lot of time as an adult learning about missionaries (I attended the Church of the Nazarene’s annual missions conference for many years before we left that church in 2019), so I’ve heard the basics of the story of Jim Elliot, but I didn’t know a whole lot. What I knew could be boiled down to just two points: he was a missionary to a remote area (I couldn’t have told you where), and he was killed by the natives for being there. In fact, whenever I hear the word “martyr,” Jim Elliot is the first name to pop into my head. So I was very interested in getting my hands on this book by Janet and Geoff Benge. 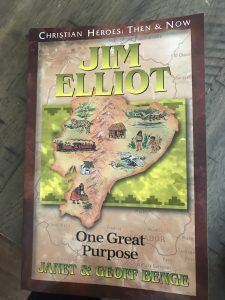 Like all of the YWAM biographies, this one also starts with chapter 1, which is really more of a “prologue” than a chapter. In fact, I wish it was labeled as such because chapter 2 always goes back in time, and the story progresses from there. It’s a great literary tool, starting with a really exciting part of the story and then going back in time to drive the story to that moment. It definitely draws readers in, and is a very effective literary tool. In this book, that opening chapter tells of the moments that Jim and his companions, Ed McCully, Roger Youderian, Nate Saint, and Pete Fleming, learned that the Auca Indians of Ecuador – those they were there to reach with the gospel – were on their way to find the missionaries. Of course, knowing the tragic story of Jim, that is one of the final moments of his life.

Unlike a lot of the YWAM biographies, the story of Jim Elliot doesn’t spend any time on his early life. Starting with chapter 2, it dives right in to the beginning of his missionary journey in 1952. The story of those four years is full enough that they would have needed 2 books to tell if they’d included his early life too! The story progresses rather quickly through the time Jim et al spent in the jungles of eastern Ecuador, and like the other YWAM books we’ve read, the chapters often end in exciting places (not quite cliffhangers, but close), and my kids always want me to keep reading. One thing that was different this year is that Grasshopper (9yo) is a strong reader on his own now, and sometimes he would read ahead. Like when I read the Jacob de Shazer book to my older kids a few years ago, I was sobbing by the time we got to the end of this one. I just love these missionary stories! 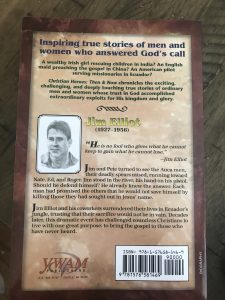 In addition to the book itself, we received the matching study guide, but we didn’t utilize that this time. The books themselves are fantastic sources of literature and history (biographies are my favorite way to teach history to my kids) in a homeschool setting. But if you are interested in making a full-blown unit study from one of the YWAM books, including ideas for presentations, comprehension questions, critical thinking essay questions, a multitude of hands-on activities, and more.

We were the only family to receive the Jim Elliot book this year, but there are plenty of other reviews of other books from the Christian Heroes Then and Now series. I encourage you to head over to the Homeschool Review Crew website to learn more!