Several years ago, when we first took the big kids to the eye doctor, Munchkin was diagnosed with an astigmatism. It turns out that this is very minor, and is easily correctable with glasses. He’s worn them since he was 5. Just this year, we let him switch to contacts. It was quite a learning curve for him, but it’s been really good. He’s super happy with them, and now has the benefit of being able to see during dance class and performances when the kids go back next month. His astigmatism is so minor that the eye doctor (a different one than the one who first gave the diagnosis) was comfortable and able to prescribe him “spherical” contact lenses. 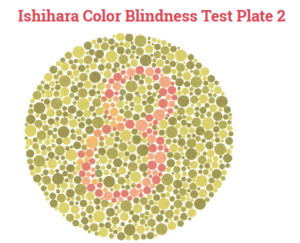 Seahawk had a different diagnosis, and one that is a bit more unusual. We were told way back then that he is red/green color blind. This doesn’t mean that he doesn’t see in color (as a child version of me thought when she heard “color blind”). It just means that he can’t see certain combinations of colors, and some colors may not look the same to him as they do to a person with regular color vision. A couple of years ago, I went over the Ishihara Color Blindness Test with him, more for my own curiosity than anything else. In case you’re not familiar, it’s just a series of images. If you can differentiate the designs (mostly numbers) from the background, then you have regular vision. If you can’t, then you’re color blind. Seahawk couldn’t see any of the numbers. I found that absolutely fascinating, because I didn’t have any trouble seeing them at all. I believed him when he said he couldn’t see anything there, but at the same time I couldn’t comprehend it. The numbers all seemed so clear to me!

Because this has been such an interesting diagnosis for him, we told people (especially grandparents and other close relatives) right away about it. My dad was the most interested/concerned. He always wanted to be able to do something to help Seahawk see colors better, but what?

Grandpa was watching TV one day and saw a piece about how a man had invented a “cure” for color blindness completely by accident. I don’t know the full story, but apparently the guy was trying to invent some other kind of lens and when he gave it to his friend to try out he was told, “It doesn’t work for [that], but these are still amazing! I’m color blind and can see things in a completely different way now.” The inventor had no idea his friend was color blind, so this was quite a shock to him, but he rolled with it and started marketing the glasses. My dad heard about them and immediately decided he wanted to get a pair for Seahawk. It took him a while to save up the money (he’s retired), but he did it, and just a couple of weeks ago brought the glasses to us for Seahawk. 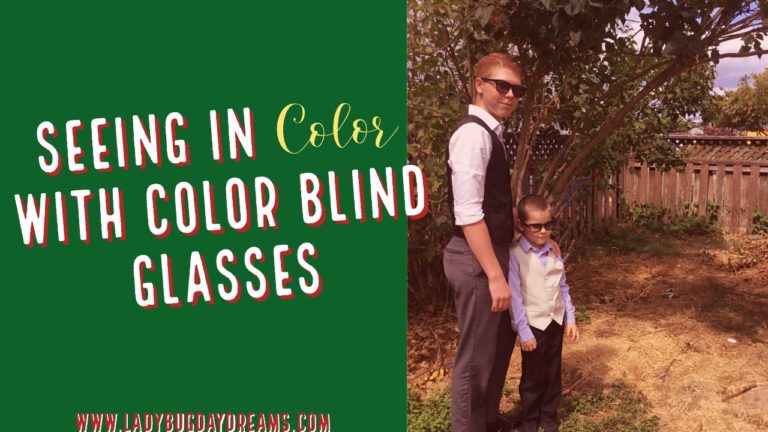 He never told Seahawk that he was planning to buy him a pair, or that that was the reason he was coming to visit. (Living two hours away, the visits can be pretty sparse sometimes.) He bought the other kids regular sunglasses on his way so that it would be less “out of the blue” for Seahawk to get a pair. With everyone’s glasses on their faces, we went outside to try them all out. Seahawk took one look at Grandpa’s truck with his new glasses on and was instantly confused. “I thought your truck was purplish…” It’s actually dark blue. For the first time ever, while wearing these glasses, he was able to see the color for what it really was. We all just stood there quietly while he processed what he was seeing, and the moment he did was pretty magical. “Wait a minute… are these color blind glasses?!” He was pretty excited to be able to see true colors for the first time in his life.

Seahawk has never been much of a glasses wearer (the eye doctors always say that he could benefit from reading glasses, but I know from experience that he won’t wear them so we don’t get them – the eye doctors are okay with that because his vision isn’t that bad), so he doesn’t wear his color blindness glasses all the time. But there are times when he really wants to see the true colors of things, and he always wears them then. These include activities such as watching movies, going to the duck pond, playing Jumanji (the game uses red/blue “hidden messages” with a decoder), and more.

Will and I – and especially my dad – are so glad that Seahawk can now see in true color!