Twilight is one of my favorite book series. I’ve read the books probably 10 times each, listened to the audio books a few times, and seen all of the movies countless times. It seems that people either love it or hate it, though, and there’s not really any in-between. Today I want to talk for a few minutes about my thoughts on the saga, and more specifically about the things most people seem to have a problem with. 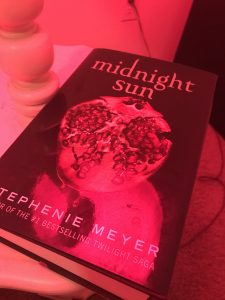 (In case you’re not familiar, Twilight is a series of 4 books that were adapted into 5 movies. They tell the story of a human girl who falls in love with a vampire.)

Bella is a flat, boring character

Twilight centers on the story of Bella Swan, a teenager who’s spent her entire life living with her mother in Phoenix after her parents divorced when she was a baby. Her father lives in northern Washington. She visits him annually, and we’re dropped into her story as she’s on her way to move in with him permanently. Her mother has recently remarried, and she decides to give the newlyweds some space, hence the big move. This alone is something that I would argue is anything but “flat” and “boring.” It takes courage to move across the country, especially as a young person leaving behind everything you’ve ever known (including your own mother). The books are told from her first-person perspective, so we as readers are privy to her every thought and action. She might come across as a little bit vapid, especially when she gets her first glimpse of the Cullens (the vampire family in the story) – she cares more about how beautiful they are than really anything else. But because we’ve been inside her head for a few chapters already at this point, we know that this is because she doesn’t have the best self-esteem (and who can’t relate to that?). She doesn’t view herself as exceptionally beautiful, so she’s fascinated by people who are – especially since there are 5 of them all together who are. And besides that, she’s a 17-year-old girl; that particular species is vapid (I say, as someone who used to be one). So while she may not be the most exciting character on the planet, I don’t think Bella deserves half the criticism she gets online.

Bella and Edward’s relationship is “toxic”

This is the biggest problem most people have with the series, and I can boil down every single issue people have with it down to one main cultural failing we have in America (and the West in general): lack of proper roles. I know that this is an unpopular opinion (very unpopular), but it’s one I sincerely hold. If we adhered to proper biblical roles in our society, we wouldn’t be offended by any of the things people have serious issues with. Allow me to explain a bit.

Edward is creepy because he watches Bella sleep. This is perhaps the only one on this list that’s a little weird, but that’s only because we live in a human world where everyone sleeps. Edward, the vampire in the relationship, doesn’t need to sleep so he spends his nights watching Bella. So again, weird but not automatically problematic.

Edward is an abusive jerk for preventing Bella from seeing Jacob. In proper biblical roles, Edward – as the man – has a right to determine and demand things from Bella. While Jacob was a good friend in New Moon (the second book in the series, when Edward left Bella in an attempt to protect her from the vampire world), he takes advantage of that friendship in later books. He knows that Edward is back, and that Bella chooses Edward over him, and yet he still pushes a relationship (not just a friendship). But even ignoring Jacob’s behavior, it bears repeating: so long as Bella and Edward are together, he has the right to make certain decisions on her behalf. That’s just how it works in a proper relationship, whether you like it or not. (And believe me, it’s not always easy to be a fully submissive wife, but that doesn’t mean it’s not the right thing to do or that my husband doesn’t have the right to tell me what to do.)

So, in short, yes, their relationship is toxic if you view from a Western, feminist mindset. If you look at it from a traditional, biblical perspective, it’s not.

This is one aspect that I’m unsure of. The main criticism of this “relationship” is that it’s considered grooming. This young child – quite literally a newborn – has a 17-year-old man in love with her. Jacob’s defense is that it’s not “love,” but more a protective relationship. He wants nothing more than to keep her safe. Critics say, “Yes, but only until she’s old enough to become your girlfriend, and by then she’ll be so used to having you around that she won’t realize she has the choice to say no.”

It seems a bit strange to have chosen for Jacob to “imprint” on Renesmee. In fact, because of that, it seems as though the entire pregnancy plotline of the last book was put into place for no reason except to separate Jacob and Bella. It was a tidy way to get Jacob to give up on Bella, when really he should have done that the moment Bella and Edward got married (whether he was happy about it or not). When I read the books the first time, over ten years ago, it didn’t seem that strange to me. It was just the way the story went, and who was I to judge the way an author chose to tell their story? But now, as I exercise my critical thinking skills more and more, I can recognize that this plot device was nothing more than an “ex machina” (a plot point that exists for no reason but because there’s not other way for the characters to get out of their current situation). The entire character of Renesmee is an ex machina, and that’s a bigger “problem” than Jacob’s imprinting on her. I wonder how the finale of the series would have gone if Bella hadn’t gotten pregnant?

These are just three of the many issues people complain about in Twilight, and there are many others. I might explore more of these issues in the future, but that’s all I’ve got for now. And the second one, regarding the “toxic” relationship (which I don’t think was toxic at all) was what I really wanted to put out there.