We’ve been “back to school” for almost four weeks now, so I thought I’d do an update on how things are going. In short, “so far, so good.” Things aren’t exactly the way I’d lined them out in my plan when I wrote about what I hoped to accomplish before we started lessons, but isn’t that normal? Even though they’re not precisely what I thought we’d do, I’m very happy with what we’re accomplishing each day, and that matters more than following a plan that was written before I knew how things would go. 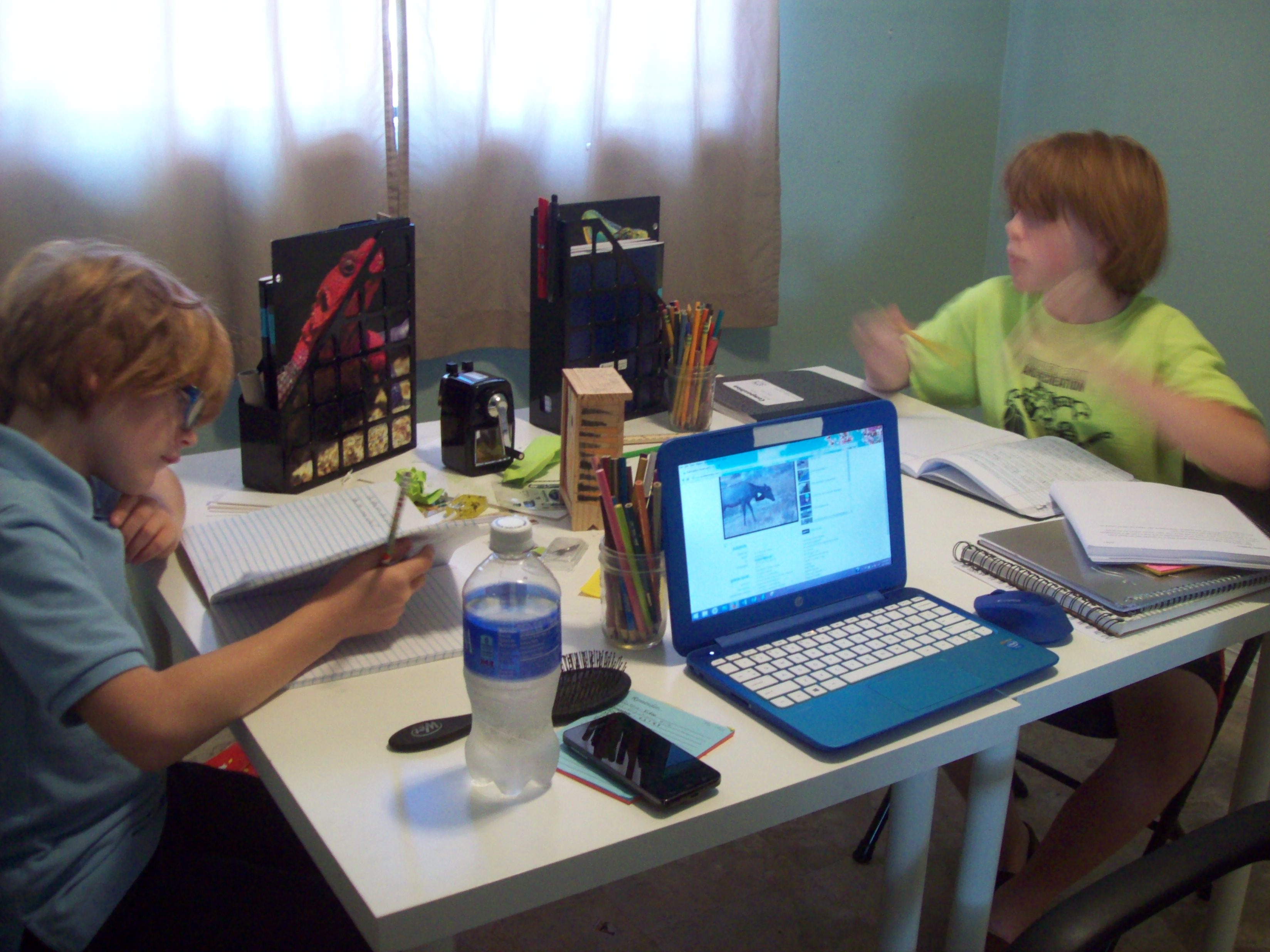 My method of homeschooling is somewhere between relaxed and purposeful. The boys each have a list of what they must accomplish each day, but half of that is things they can do on their own – hooray for teaching them independence! Those items, they’re allowed to in any order they’d like just so long as they get them done. This is the “relaxed” portion. The rest of the list are things we work on together because they’re either a) slightly above grade level and they need help (I don’t want to frustrate them, but I do want to challenge them, so most things are at their grade level and some things are above) or b) things they both do at the same level despite their different grades and ages. The latter category includes grammar and science, while the former includes our middle-school level literature guide from Progeny Press (more on that in a review at the end of next week). These are examples of my stricter side. 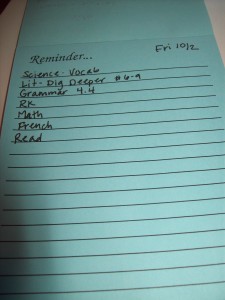 An example of our to-do list. Each child has one every day.

So, how do they know what they need to get done each day? We rely on a simple, tried and true method: the to-do list. For less than a dollar apiece, I bought them each a small (quarter sheet or so) notepad from the local copy store, and each week (usually on Saturdays or Mondays) I map out what they need to accomplish each school day. We do school Tuesday through Friday most weeks, but if I know in advance that there’s something going on one of the other days, we’ll do Monday instead of that day. (An example of this is when I go into the hospital to have Dragonfly. Because he’s coming via repeat scheduled c-section, I know that he’ll be born on a Friday, so we’ll do school on Monday that week since I won’t be around on Friday.) The list includes things that are generalized and specific. For example, they know they just have to do one math worksheet per day, so I just write “math” on their list. But science and literature aren’t that cut and dry, so I write the subject and what I expect them to accomplish (Science – vocabulary, for example) on the list for those subjects. As a rule, the subjects with the extra notes are the ones that we do together. 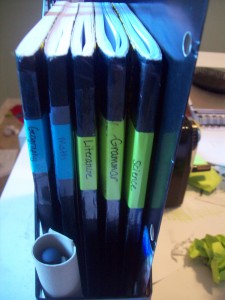 I added labels to the spine of each composition book so the boys wouldn’t have to take them all out each time to look at the cover and find the correct notebook. The labels help to streamline everything.

The last big thing I want to mention is our attempt at notebooking this year. As planned, I purchased each of the boys a set of composition books for all of their school work to go into. Because this is our first year trying the notebooking approach, I’m not entirely sure we’re doing it “right.” Allow me to explain how we’re doing it, and maybe if a notebooking pro ever reads this, they can give me tips 😉

So, they each have one composition book for each subject (except the computer-based ones). A lot of the things we’re studying have worksheets or study guides to help us/them along, but since I don’t have access to a printer very easily, I’ve been handwriting all of the worksheets. Twice. One for each kid. This is very time-consuming, but it’s worth it to me in order to keep the kids at home to educate them. Fortunately, only about two-thirds of the subjects require worksheets (math, literature, science, grammar, and geography).

For math, I found a website that details what is expected of students to know by the end of each grade in our state, so I’ve been using that as a guideline and my subscription to Super Teacher Worksheets to create math practice. I teach them the concept (Munchkin is working on area and Seahawk is mastering his fraction skills), and then there are several days of practice so they can master it. I think this is better than the old math workbooks we used to use in that I only add the “homemade” worksheets (not really, just copied from Super 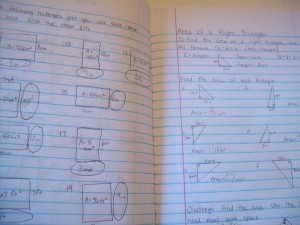 Teacher to the notebooks by hand) one week at a time. If I feel like they need more practice in the area, I continue with the same concept the next week. Once I’m comfortable that they’ve mastered the concept, only then do we move on.

Science and literature are a bit more streamlined, at least right now. We’re using Visual Learning Systems for science, which I reviewed earlier this year. It’s a wonderful combination of explanatory videos, worksheets, and occasional experiments. We’re doing the Life Science unit right now, and every single worksheet is right on the website for you. You can print them, but since that’s not an option for me at this time, I copy them down and the boys complete them like a traditional worksheet. Literature is very much the same. We’re using a Progeny Press study guide, which can be done right on the computer if you’re only using it with one student, but since I’m having both of mine use it, I copy everything 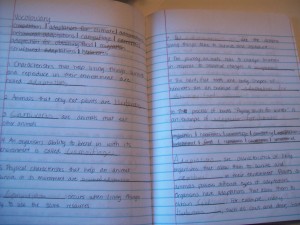 down for them, and they complete it. Once we finish our Tuck Everlasting study, things will get a bit more interesting (for me) because they’ll be doing different books, and I’ll probably attempt to write my own study guide for them based on what they’re reading, thereby combining literature and “read your novel” into one subject for them. Doing so will allow them more autonomy in the literature subject each day as well.

So, I guess that’s about it as far as how things are going and what we do/how we make sure everything is accomplished each day. To-do lists, worksheets, notebooks… That’s how we work.

How do you run your homeschool?