Paul’s writings were vital to the spread of early Christianity, and it was Luke who helped him get the word out. In a new film from director Andrew Hyatt comes Paul, Apostle of Christ, the story of how Paul (in prison) and Luke work tirelessly to get the message out.

Disclaimer: I haven’t seen this movie yet as it doesn’t open until tomorrow. The information I’m sharing is from the website as well as the promotional material I was provided.

The filmmakers took great pains to keep this film as biblically accurate as possible, using only scripture as their source material. After having seen a few Bible story movies in the past few year that were definitely not biblical (*ahem* Noah *ahem*), I’m really impressed with this statement. 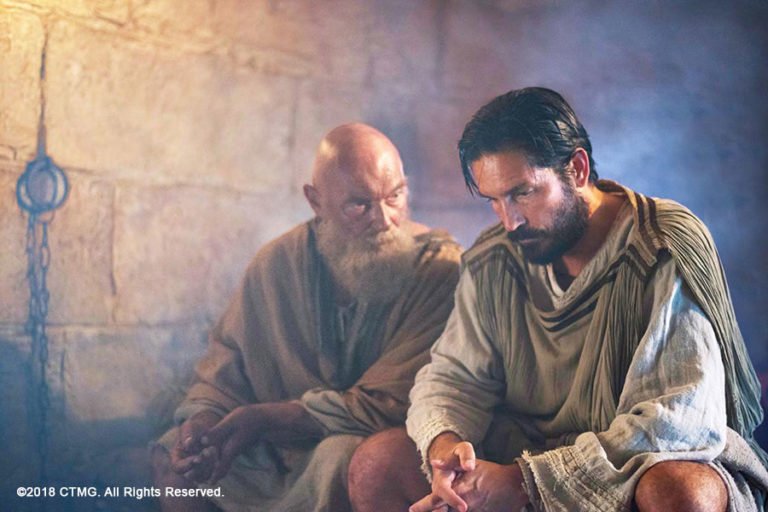 This historically accurate film brings to life two very different men, bonded together by their love for Jesus. They realize separately that the city of Rome is being overtaken by evil, so they struggle to finish their respective books, leaving their writings for generations of people after them.

There are two main themes in the film that are very relevant in today’s culture. Number 1, evil is all around us. It can manifest very suddenly and without cause. We see that weekly (or more often…) in the news, especially things like school shootings. Number 2, and the main lesson to learn from Paul and Luke: God’s love is the only answer.

I’m also excited that Paul is getting a nationwide release; often, these types of films don’t come to my area. (We don’t have a small population here in the Portland area, but we’re not as big as NY or LA, so we often get skipped.) To see if the film will be in a theater near you, the movie website has a spot for you to enter your zip code and it will pull up locations and showtimes (it opens tomorrow, March 23, 2018). If it is near you, you can buy your tickets from there too.

Disclosure (in accordance with the FTC’s 16 CFR, Part 255: “Guides Concerning the Use of Endorsements and Testimonials in Advertising”): Many thanks to Propeller Consulting, LLC, Collide Media Group and Columbia TriStar Marketing Group, Inc. for providing tickets to see the movie on its release in exchange for this promotional post. Opinions are 100% my own and NOT influenced by monetary compensation.