We started our official homeschool year this week. Seahawk is in 8th grade now, Munchkin is in 6th, and Small Fry is in Kindergarten (I suppose that might mean I’ll have to change his blog nickname soon since he’s not really that small anymore…). I’ll give each of these boys a special day here on the blog to talk about their favorite things and what we’re planning to use for their curriculum this year. Today, I’m starting with my brand-new Kindergartner. 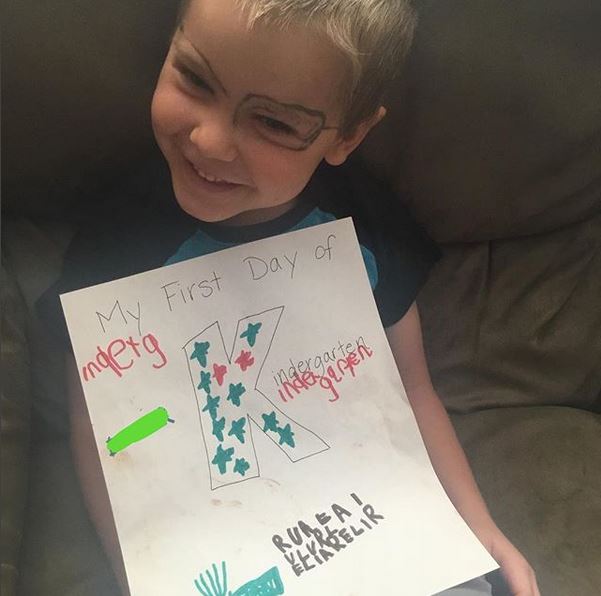 I told him he could decorate this sign any way he liked. He chose to fill the K with stars, and then he drew a fan near the bottom because “I like to make fans.” He drew a picture of an envelope next to the fan because he “likes to mail things.” Then he filled the rest of the area with random letters because he loves to write, even though he’s not proficient enough to write anything but his name yet. Speaking of his name, he wrote that on his paper too, but I marked that out for privacy reasons. That’s what the green box on the left is. Oh, and that’s not a black eye he has. He just likes to use my eyeliner to get pirate eyepatches sometimes.

Small Fry is 5 years old. His birthday is right near Will’s and mine (all three of us are in a 9-day period in July), so that’s pretty special. His favorite foods are spaghetti, macaroni and cheese, pizza, pickles, blueberries, and ramen (a newfound love). He started learning to read about six months ago, and we’re really going to be cracking down on that skill over the next few months. He also loves to watch movies (just like his dad) and play outside with his big brothers and their friends.

For his Kindergarten year, we’re keeping things pretty simple. We will continue to work on real life skills like having him help in the kitchen and learn to really clean up after himself. For official curriculum, we’re going to use things we started during the spring and summer and focus hard on really getting the concepts down. This includes just a few subjects:

Reading: We will finish up the Eclectic Foundations curriculum we reviewed a few months ago. When that’s done, I think I’ll just have him practice his reading using easy readers from the library.

Math: We’re using Starfall Kindergarten Mathematics with him. Even though it was designed to be used in a classroom setting, I’m really impressed with it and have been modifying it to work with just one student. So far, it’s a hit with Small Fry.

French: He got his very own Rosetta Stone account on my computer this week (we have the full program, which allows up to 5 students and were only using 4 before now). On the first day, he made it through half a lesson. Considering that first lesson is quite involved, I’m impressed that he made it that far – and was doing quite well with it.

Geography: We are currently reviewing Let’s Go Geography, a curriculum for kids in grades K-4. I’ll have that review up here on the blog in about two weeks.

That’s it. Like I said, I want his Kindergarten year to be full of meaningful education, but I don’t want him to get burned out on school, so we’re keeping it very basic until more is absolutely needed.