If you’ve had little kids any time in the last 20 years (maybe more), you’re likely familiar with LeapFrog® . I remember borrowing LeapFrog DVDs from the library 12 years ago when my teenagers were small, but I’d largely forgotten about them until the opportunity to review their website and app, LeapFrog Academy®, was presented.

LeapFrog® is a learning resource for kids ages 3-6. Even though I technically only have one child in that age range, I had three of my kids get accounts. Bumblebee is 2 1/2, Dragonfly is 5, and Grasshopper is 8. They have all been having loads of fun with the app over the past few weeks!

Bumblebee isn’t quite ready for much on this app. He’s almost at the 3-year suggested age, but because he was such a slow talker, we’re focused more on increasing his vocabulary and working on preschool milestones unrelated to reading (counting, colors, etc). Despite that, I tried working with him a little bit on the “regular” lessons portion of the app, but it was just too much. But that was okay! LeapFrog Academy® has simpler things like videos for just that situation. In fact, he’s watching the ABC song video as I write this review.

Dragonfly is currently an early reader. He’s been working through another reading app for the past several months and knows many sight words as well as loads of simple words. With this background, he was able to to have a lot of success with LeapFrog Academy®. But that’s not all this app has to offer! While my previous experience with LeapFrog® was mostly alphabet and reading, this time around I’m discovering that it’s much, much more than that! Besides reading, there are sections that deal with health, science, math, and more. It really is an all-inclusive preschool/Kindergarten supplementary curriculum. 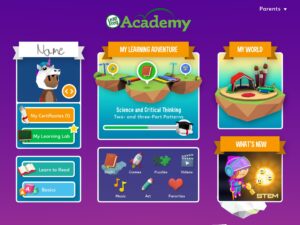 Grasshopper was above the age range for this app, but I knew he would feel left out if he didn’t get an account, and I was right. He has also been working on the app using the first grade level (the highest it goes). It’s very similar to the Kindergarten map, but harder questions and games. He also has been loving it!

When you first open the app, you choose which child is working, and from there you can decide which section to work on (lessons, videos, etc). The app automatically assigns them a grade level based on their age – preschool, Kindergarten, or first grade. Grasshopper and Dragonfly worked pretty much exclusively in the map (which is the lessons portion of the app), and Bumblebee watched the videos, like I mentioned before. To be perfectly honest, I didn’t watch/help the kids every time they used the app, so I don’t have a complete understanding of the ins and outs, but I do know that it follows a treasure map-style progression. The character moves through the map when the child taps on the different parts of the path, and when they get to a lesson (delineated by a large icon on the map’s path), they have to complete it in order to move on. When they finish a single lesson, a bridge appears to allow them to move forward on the path. When they complete a map, they are given a new piece of their pirate ship. None of my kids have completed their pirate ships yet, but Dragonfly especially is super excited each time he gets a new piece.

My kids have been loving the LeapFrog Academy® app! They never argue when I suggest they work on it, and I love that they’re spending a portion of their screen time learning. I definitely recommend LeapFrog Academy® for kids this age. You won’t regret it!

Make sure to read more reviews from the Homeschool Review Crew too!