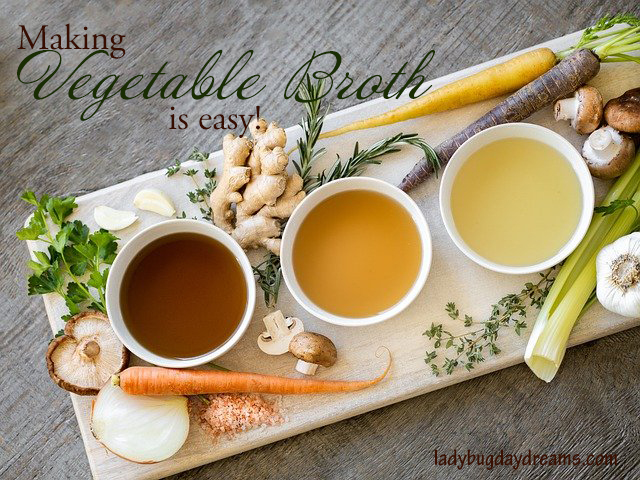 Something I always wanted to do but never really got the hang of until recently, was to make my own broth. It’s not that buying store-bought broth is so expensive, but it’s more about getting all I can out of what I do buy. Take asparagus for example. It’s often one of the more expensive vegetables, and then you have to cut off half of it and throw it straight in the trash. That has always been a frustration of mine. Smaller things like carrot peels and onion castoffs didn’t bother me too much, but now even those get second life. Let me tell you how I make my broth, and then at the end I’ll give you a recipe you can make to utilize your freshly made vegetable broth.

The first thing to do is get a gallon-size zip top bag. Every time you cut up or peel vegetables – no matter what they are – put everything you would normally throw away into this bag instead. This includes, but is not limited to:

Seriously, anything you can think of that you’ve used the “good” part of should go into the bag. It might take a few days or longer to fill up your bag, but just keep it in the fridge. It will eventually fill up, and then you’ll be ready to make your broth!

When your bag is totally full (it should weigh about 2 pounds, give or take, depending on what kinds of veggies you’ve filled it with), empty its contents into the biggest soup pot you’ve got. Fill the pot with water. Tap water is fine because you’re going to be boiling it. Use more water than you think you’ll need. I usually aim for 16-20 cups (that’s at least a gallon). Place it on your stovetop and bring to a gentle simmer over medium-high heat. Set the pot’s lid askew on top, and then just let it simmer and reduce. You want to let it go for at least 2-3 hours. Check it starting at about 2 hours; you’ll know it’s ready when you can see some good color in it (remember, it started out as just water). At that point, it should have reduced down quite a bit. I usually end up with 1-2 quarts of broth after having started with 4-5 quarts of water. Place a strainer over a bowl and empty your broth and veggie scraps into it. Lift the strainer out and discard the scraps (guilt free now that they’ve been used to their full potential!). The broth will be left in the bowl.

At this point, I like to refrigerate it overnight (my broth making usually happens after dinner) before transferring it to freezer bags for long-term storage. When the broth has cooled, I measure out 4-cup servings and gently pour it into a zip-loc baggie. This way my homemade broth is divided up into the same portions as a store-bought box of broth. If I have a reasonable amount left that isn’t a full quart, I write that amount on the baggie along with the date and contents. This way I know it’s not a full batch when I thaw it for use later. If you have mason jars, definitely use those! You’ll be much more environmentally friendly than I am. (I’ll get to the point where I use jars instead of bags soon, but I just don’t have the storage space in my current home for them.)

That’s all there is to it! I told you it was easy!

And now here’s that bonus recipe I promised you.

In a large soup pot, melt 2 tablespoons butter and add your choice of veggies. I like to use onions, carrots, and zucchini (make sure to save your scraps for more broth!). Cook the veggies until they just begin to soften, 2-3 minutes. Add 2 cups arborio rice and stir to coat.

Meanwhile, in a separate pot, add 7 cups of your homemade broth and bring to a low simmer. Add the broth to the rice mixture, 1-2 ladlefuls at a time, stirring often and allowing the broth to fully absorb into the rice before adding more.

When you have used all of the broth, turn off both burners. Stir in about 1 cup (more or less to taste) Parmesan cheese. It’s really good with the “canned” variety of Parmesan, but even better if you have the time and budget to get a block of fresh cheese and shred it instead.

What’s your favorite way to use homemade broth?