Ballet Boy, for many reasons that he and Will discussed, decided to pursue a GED (formally “Tests for General Educational Development”). The primary reason is that the two of them thought a “homeschool diploma” wouldn’t be taken seriously by people in the real world. Today, Ballet Boy and I want to talk a little bit about the GED process in our state. 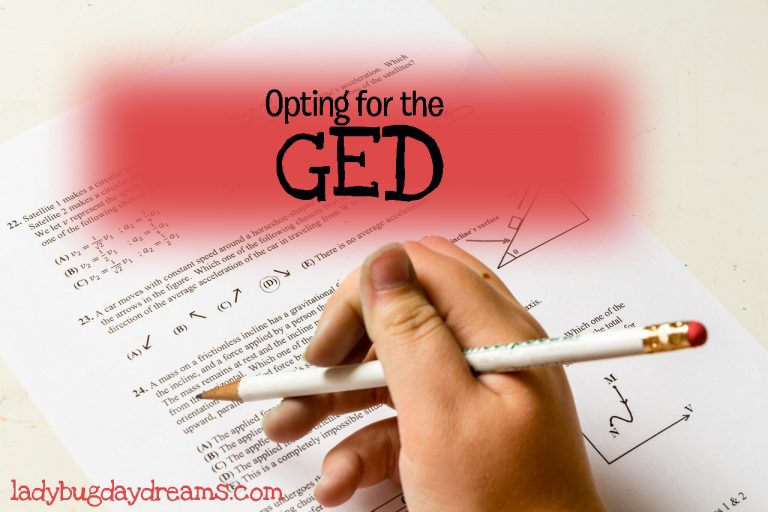 Disclaimer: While it seems as though the basics are the same from state to state, do not take our words for facts nationwide. Always do your own research and choose the best path for you, as well as making sure you follow all the laws and guidelines in your specific state.

The GED is a series of four tests, designed to determine whether a student has enough knowledge to “be done” with their schooling without technically “graduating.” You have to be 18 in order to take the tests, and each one is administered separately, with their own fees ($38 each in our state; if a retest is required, the fee is slightly lower). The tests are available for in-person or online, though the price is slightly higher online starting September 1st (in most states). If you take the test in person, there is no practice testing required, but to do it online you must have passed a practice test within the last 60 days. Some states require that you live in the state to take their test, but not all of them do (ours doesn’t). Make sure to find out whether the state you wish to test in has residency requirements or not before you commit. Additionally, not all states offer the test (Indiana, Iowa, Louisiana, Tennessee, Maine, Missouri, Montana, New Hampshire, New York, and West Virginia), so if you live in one of those states, you need to either take the test online or travel to a state that allows non-residents to test.

With those basics discusses, I will now pass the torch over to Ballet Boy.

The trick with being homeschooled is that it can be pretty difficult to keep track of things like credits. That hasn’t mattered before, but seeing as I’m 18 in October, graduating – or at least finishing – starts to be a necessity. We have done so many different curricula over the years through the Review Crew that it would be much too complicated to go through them all to count up the credits. Instead, I talked with my dad and together we decided that it would be a good idea for me to take the GED test instead of getting a traditional high school diploma. Since I’m not planning on going to college, this seemed like a reasonable way to wrap things up.

The test itself is made up of four separate exams in a variety of subjects. These smaller tests are:

You need to be at least 18 (16 under very specific circumstances, such as being an emancipated minor) to take the test in my state and the fee is around $150 for the whole test. You are not required to take all four tests at the same time. To qualify for the GED you cannot be enrolled in school. The GED tests are scored on a 100-299 scale and scoring is as follows: 100-144-below passing; 145-164-high school equivalency score; 165-174-college-ready score; 175-200-college-ready + college credit score. And if you score 299 I’m pretty sure they ask you to be the president.

They say you should plan on the prep taking three months to pass the test but they also say that 65% of students fail the test and have to take it again. I’m taking my time and checking all my boxes before I take the exams. The only subject that concerns me is math, so I’m going through a program called Triad Math (which, ironically enough started out as a review product) and brushing up on everything. I also have an ACT prep course that I’m starting, and there’s tons of help on YouTube to fill in all the gaps. So for anyone reading this who’s planning on taking the GED there is no one specific way to prep. Look at the subjects, work on what you’re not confident in till you are, and I’ll meet you on the other side 😉

Thanks for reading and I’ll see you in the next one.