Here’s a photographic glimpse of our week. 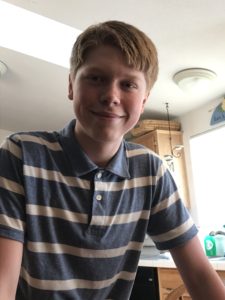 Seahawk got a haircut.

And he opted to not just go for a shorter version of his old style; he picked something completely new, which we supported since he’s not really a little boy anymore. He needed a new style, and we’re all really pleased with how it turned out.

I dyed some yarn.

I’d been watching a lot of YouTube tutorials on the subject lately (just for fun), and decided that I wanted to try it myself. I’d picked up a skein of plain white, wool yarn from my local yarn store on my birthday (they offer a 25% discount if you shop on your birthday), specifically to experiment with dyeing. It took several days of thinking before I knew what I wanted my dyed yarn to look like, but once I had, I went to work quickly. I started by dying the whole thing a light teal blue… 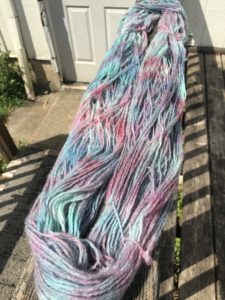 …and then I added spots of purple, blue, and red. It didn’t turn out exactly the way I’d envisioned (I was hoping for more speckles than spots/globs), but there’s absolutely nothing wrong with it. It’s very beautiful, and I look forward to knitting someone a gift with my hand-dyed yarn. 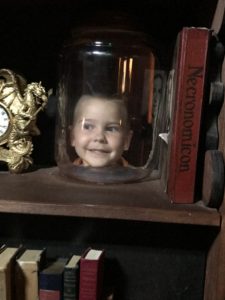 We went to “museums” at the Oregon Coast.

My birthday is July 3rd. Will’s is July 5th. Small Fry’s is July 12th. That’s a lot of birthdays, all really close together, so we usually try to do one big trip to celebrate them all (we also do special stuff for Small Fry by himself). This year, we went to the Oregon Coast and picked up my dad (he moved to a small coastal town between two of the bigger ones back in March, and now we don’t see him as much as we’d like), and took everyone to what’s called “Mariner’s Square.” It’s down on the bayfront, and it consists of three small museums: Ripley’s Believe it or Not!, Wax Works, and Undersea Gardens. Will had found a groupon for a set of 4 tickets to all three locations for a reasonable price, so we had fun going to the three spots. The above picture is Small Fry as a “pickled head” at Ripley’s. 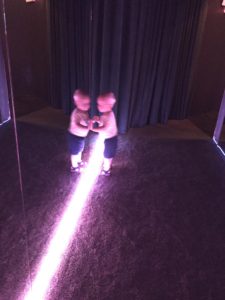 Dragonfly enamored with the mirror at the end of Wax Works. 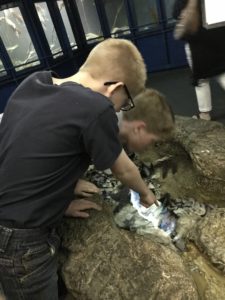 As another birthday treat for this guy, we went on a special “Mommy and me” date. I took him bowling, which he loved! We played two games, and I could tell he was really tired by the end; his score for the second game was about half of what he’d gotten on the first game. 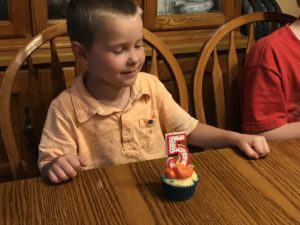 We had birthday cupcakes

For his 5th birthday, Small Fry chose spaghetti for his special meal, so I made that at the house for him. Afterwards, we had cupcakes topped with orange frosting – his favorite color. 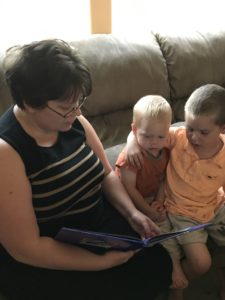 I read to the little boys.

This is something that happens fairly often, but this time was worth noting because it was Dragonfly’s idea. He found the book (Llama, Llama Red Pajama) in his room, brought it to me, and climbed up in my lap. Small Fry loves to listen to stories, so he quickly joined us. I love this picture that Munchkin took. Not only is it a very sweet moment between the three of us, but Dragonfly has his hands folded so nicely in his lap, and Small Fry has him arm draped over his brother’s shoulders.

So there you go – a little peak into our week.