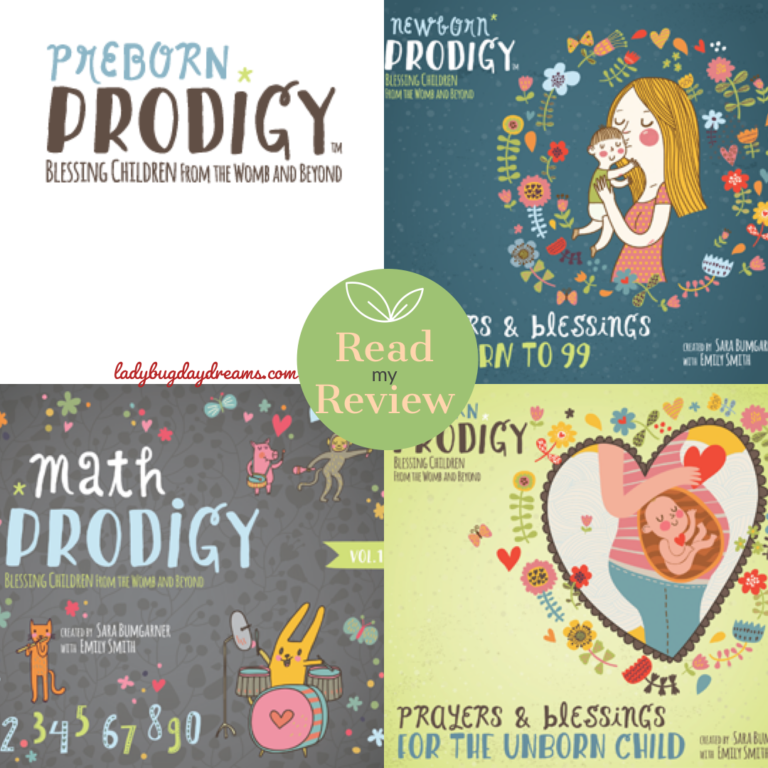 Have you ever wondered just how much certain types of sounds and music influence a person? This day and age, we all accept that babies in the womb can hear us, but how much influence does what we say have on them?

Sara Bumgarner, the owner of Preborn Prodigy, has done some research for you, and the answer to both questions is, A LOT! So she created three albums using her research, and I’m going to tell you a bit about them today.

In Prayers and Blessings for the Unborn Child, we hear gentle music, which is overlaid with promises, many of which come directly from Scripture. The narrator reads promises and assurances in many categories:

The idea behind this record is to play it while Mom is still pregnant, and the blessings and promises contained will offer assurances to the baby that he is loved, wanted, and not a mistake, before he is even born. A pregnant mom can play the record while she goes about her day, or she can play it over headphones on her belly during a few moments of quiet time.

Prayers and Blessings for Newborn to 99 is basically the sale album, but words are adjusted to be appropriate for anyone who has already been born. The tracks counteract the “bad stuff” we sometimes tell ourselves: “I’m a failure, I’m a mistake, I don’t matter.”

Math Prodigy is very different from the other two albums. Instead of reading prayers and blessings, it reads math concepts and equations over the top of gentle, pleasing music. It sounds strange, and it was at first, but it is based on the experience of a math professor (who Ms. Bumgarner saw on a TV news show) who had read about math to his pregnant wife’s belly. Fast forward 5 years, and their child was a math genius. Whether a coincidence (Dad was a math professor, after all) or because of the readings, it’s an interesting idea, and one that Preborn Prodigy ran with in creating this album. Tracks include

I played these albums for my kids at bedtime (they usually listen to audiobooks anyway). They thought they were weird at first, but they warmed up fairly quickly. They probably won’t ever ask to listen to them, but they won’t say “no” if I put it on.

I received digital downloads of these albums, but they are primarily available as CDs. (We don’t have a CD player.) Math Prodigy is available only in English, but the two Prayers and Blessings albums are available in English, Spanish, Chinese, German, Hebrew, and Afrikaans. Each CD (one album in one language) is available for $14.99. You can also purchase an instrumental version for $9.99 or a PDF of the written blessings (to read aloud to your child) for $6.99.

Many members of the Homeschool Review Crew are reviewing these albums this week, from all walks of life. I encourage you to click through and learn more.