You might recall that Dragonfly, my 4-year-old has been learning to read this summer. He’s super excited, and I want to encourage that hunger to learn, so I was really interested to have him review Reading Eggs from Blake eLearning Inc. I’d heard of Reading Eggs before (if you’ve homeschooled little kids for any length of time, you probably have too), but never really tried it, so this was an adventure for both of us. 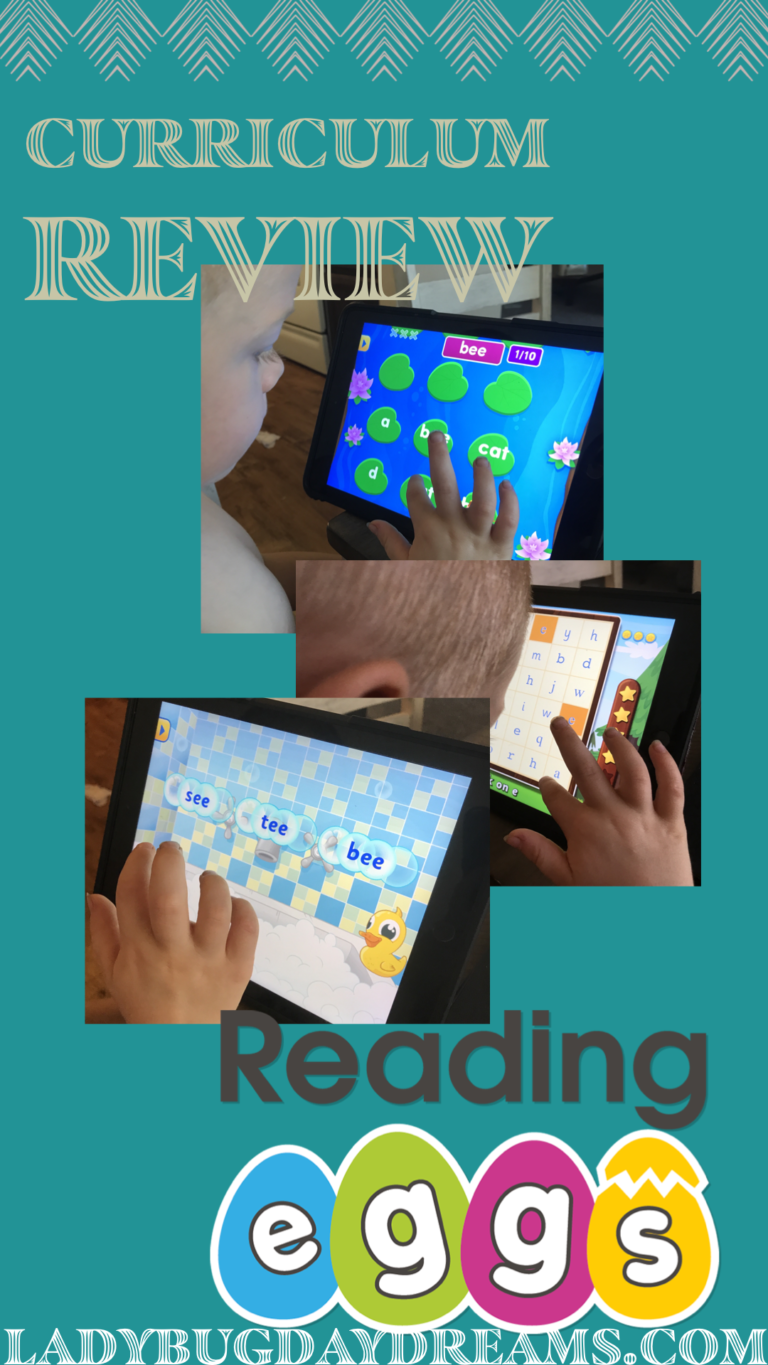 When you set up the account, there’s one log-in for your family, but each child has their own “map” within the account. When you get logged in, you choose the student and where you want them to work. There are 4 levels of reading: Reading Eggs Jr (ages 2-4), Reading Eggs (ages 3-7), Fast Phonics (ages 5-10), and Reading Eggspress (ages 7-13). We also got access to Math Seeds. I had Dragonfly start at the beginning of Reading Eggs. I probably could have (maybe even should have) had him start partway up since he’d learned quite a bit previously, but it made sense to me at the time to start at the beginning since the program was an unknown quantity to us.

Reading Eggs is available as a website (on a phone, tablet, or computer) as well as an app (phone or tablet). I didn’t realize at first that there was an app available, so we used the website. When I learned about the app, though, I downloaded it right away to my iPad. I was able to log in using the same credentials as the site, and all of Dragonfly’s progress was there. That was great, because now we don’t need to log in every single time anymore. Since then, we have used the app exclusively.

The program itself is really fun. Each lesson consists of about 10 different activities/games, all centered around a specific letter or sight word. The first activity always introduces the sound with a fun song, usually sung by mascot Sam the Ant. Then the letter (or word) pops up in different places on the screen and the student clicks or taps on them. The final activity of each lesson is reading a book that focuses on the letter of the day. This is usually a little 4-8 page booklet that has single words, each beginning with the letter. There is an option to have the book read to you, which you can turn off with a little toggle switch at the top of the screen. We always left it on.

The games in between the first and last one each time vary somewhat. I never really counted them, but there seemed to be about 10-12 total games on an (approximate) 8-game rotation. This means that the games get repeated a lot, just with different letters. But don’t take that to mean that it was boring or repetitive, because it definitely wasn’t. And even if it was, kids at this age thrive with repetition anyway. But even for me, as the teacher/monitor, it still felt pretty fresh each day. Obviously, there were some games that I liked better than others (and my preferences were usually based on what was easier for him to succeed at!), but all of the games were fun and really pushed the letter sound of the day. Let’s take a quick look at a few of the games.

Listen for the sounds: The child sees two pictures and has to determine which one has the sound of the day in it (for a single letter, the sound should be at the beginning; for another type of sound, it just has to be in the word). 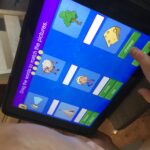 Picture Match: There are six pictures taking up most of the screen, and six words down below. When you click on a word, it is read to you and you drag the word to the correct pictures. This is done twice with the same words, but they get mixed up between.

Word Blending: Sounds are shown, each in a bubble. The sounds are read, then blended into a word, and the child repeats.

Frog Hop: There are many iterations of this game, but the concept is the same. The sound or a word with the sound is shown amongst two others and your child chooses the correct one. They do this ten times to get the frog all the way across the pond. 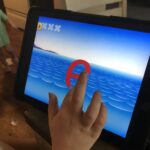 Dot to Dot: Touch the spots in order to create the letter of the day.

Word building: The final sound(s) are shown along with a picture and three possible starting sounds. The child chooses the correct one.

Letter Grid: In a 6×6 grid, there are 6 of the letter of the day (in different fonts). The child finds them all. The game is repeated with the capital version of the letter.

This is just a small sampling of the different games; as I mentioned, they go on something of a rotation from lesson to lesson. With each game, the child is allowed 3 mistakes. If they succeed with fewer than three errors, they can move on. With the third error, they are automatically restarted on the game.

At the end of the lesson, your child is awarded with some sort of creature that hatches from an egg on their map. This creature is based on the letter of the lesson (Pram Lamb for the “am” sound, for example). Each lesson took Dragonfly about 20 minutes to complete.

So what did we think? We love it! Dragonfly is always asking to do Reading Eggs. Seriously, not a single day goes by when he doesn’t ask to do a lesson (even the weekends). That’s a raving review if ever there was one!