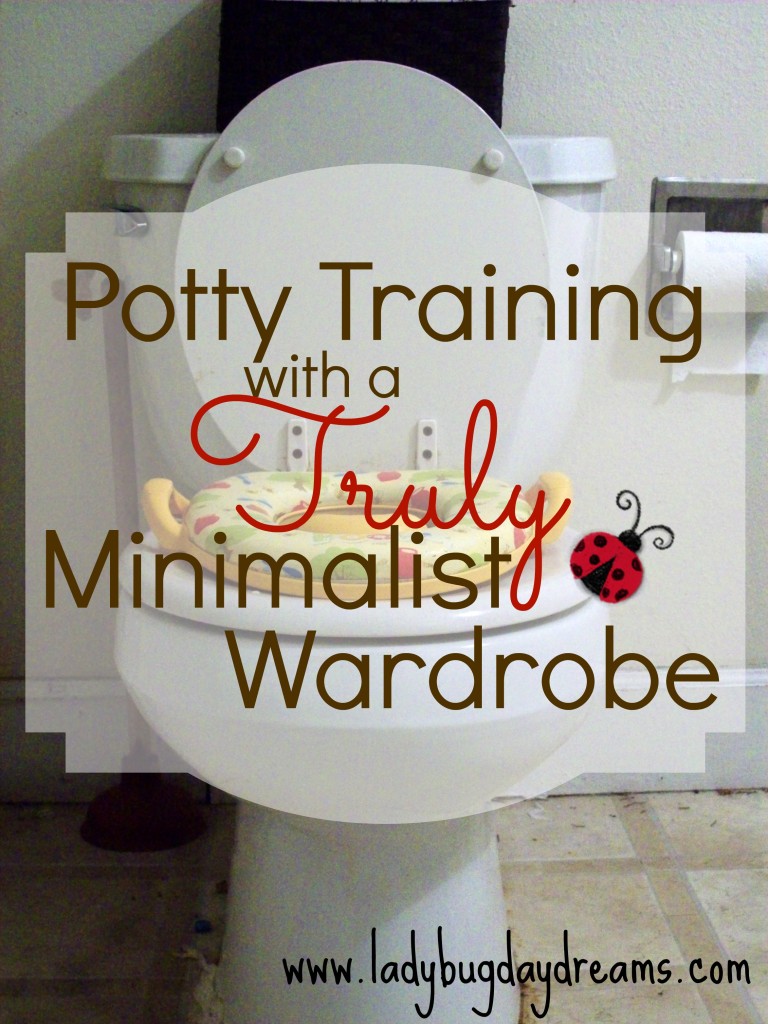 It’s no secret that our family has fewer clothes than an average family. Much fewer. It’s not because we can’t afford more; we just choose not to have as many. This has its benefits and drawbacks. A benefit is that we have fewer clothes to wash, and therefore less laundry to do. A drawback is that we have to wash our clothes more often, so there’s more laundry. I know, I know, completely contradictory. We have more loads of laundry to do, but each one is smaller. It’s a trade off. Since putting the laundry away is the part of the chore that I hate the most, I’ll take more loads with fewer items in them.

But that’s not the point of today’s post. Today I want to address something that was asked of me during my last wardrobe post: How do you potty train a toddler if you don’t have a lot of clothes to change him into? The answer is very simple. During toilet training sessions, I don’t put any clothes on him at all. This doesn’t work when you go out, obviously, but at home, it works swimmingly. And honestly, I’ve found that it’s too stressful for the child to go more than a few hours at a time when they’re learning anyway. END_OF_DOCUMENT_TOKEN_TO_BE_REPLACED

We went shopping for new clothes yesterday. I’ve gotten a new item here and there, but never a completely revamped wardrobe before, so that was nice :). The kids’ clothes are fine – and we’d shop for them at Goodwill anyway, not Old Navy (since they wear out their clothes so fast, it’s too expensive to buy new for them) – so it was a day for hubby and me.

One slight disclaimer before I post the picture… we are striving toward a minimalist lifestyle. We’re not there yet, but we’ve made huge strides the past 18 or so months. Yesterday was a huge step in the “right” direction.

I have these two dresses, which are the only items from my old wardrobe I’m keeping. They’re only about 2 years old, and I haven’t been able to wear them the past 10 months because in order to breastfeed Small Fry, I had to switch to skirt/top combos.

These are the new clothes. I got those two skirts (which replace 4 old skirts), 2 black camis, and one white cami. The tops replace 2 white ones and a brown one from before. But the Old Navy ones feel much better than their WalMart counterparts.

I also got a Coobie Bra. No picture of that ;). But seriously, if you’re in the market for new bras, I highly recommend them. This is my first one, and I love it. It’s seriously the most comfortable bra I’ve ever worn, and with a price tag of only $22, they’re comparably priced to a traditional bra. I definitely plan to replace all of my bras with Coobies, one at a time over the next couple of weeks.

You may notice something “missing” from my wardrobe: jeans. Outside of my pajamas, I haven’t worn a pair of pants in years. I don’t even think about it anymore. To keep warm in the winter, I just wear tights.

So that’s it :). And if you’re curious, hubby’s gone minimalist, too. I don’t have pictures of his clothes because he left before I could snap them this morning, but he now has 2 pairs of (identical) pants, 1 dress shirt, and 2 t-shirts. His goal is to get another dress shirt and maybe some better casual shirts. He’s a pretty semi-formal kind of guy, though, so it still remains to be seen what his final shirt selection will be. As for shoes, he has 2 pairs (shoes and sandals), and I have 3 (shoes, sandals, and rain boots).

On the agenda for tomorrow: sourdough bread 🙂