My birthday was in the summertime, and Will went with a theme: boats and fast cars. We were pretty fresh off of our pontoon rental, and since it was early July the weather was still hot, so Will had boats on the brain. So on my actual birthday, we took a lunch cruise on the Willamette River in our state capital. It was a short ride (about an hour), but very pleasant. We dressed up and had a lovely time. I just love being in and on the water! 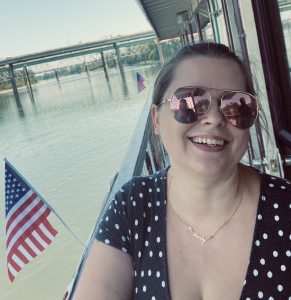 The other thing he got for me was the opportunity to drive a Lamborghini! He’d heard of Circuit One Events, which offers drives and rides in luxury cars. Options include a Lamborghini, a Ferrari, and a Corvette. A Lamborghini is his dream car, so when he discovered that was an option, it was a done deal. We bought the ticket in July, but the event wasn’t until late September, so it hasn’t been that long since the event. Let me tell you a little bit about my experience. 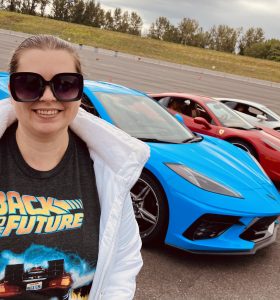 Funny anecdote: When I was a teenager, my dad had a Corvette. For this reason, I wasn’t that excited by the new Corvette at the event. I told my family about those thoughts after the fact at home, and Ballet Boy told me I was being crazy. “That doesn’t mean a Corvette isn’t amazing. It means your dad was even more awesome than I realized!” 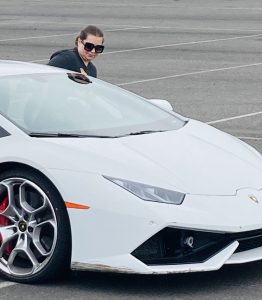 I was so nervous going up to the event! But that’s fairly normal for me; I’m a rather nervous person in general. I was very jittery clear up until I was inside the car. When it was my turn (there were quite a few people there to drive the fancy cars), the staff guy took me up to the car. The first thing I had to do was figure out how to get into the car! There was no obvious door handle like on “normal” cars. I finally got it, though, and then it was time to drive. The gear shift was very different from any car I’ve ever driven before, too. Once I got over a bit of my nervousness (forgetting my right from left as the staff member guided me to putting the car in “Drive”), it was time to drive!

The first thing you notice is the power of the car. The difference between Will’s car (2019 Nissan Sentra) and mine (1995 Ford Escort wagon) is vast. The difference between the Lamborghini and Will’s car was even more noticeable. It was a very smooth drive, even when going super fast. And the Lamborghini could stop and turn on a dime. I tried my best not to “take it too easy” while I was driving. I really wanted to release all my nerves and let loose in the car. And I felt like I had. Until I traded places with the staff member for my turn to ride rather than drive. (That was an extra fee.) 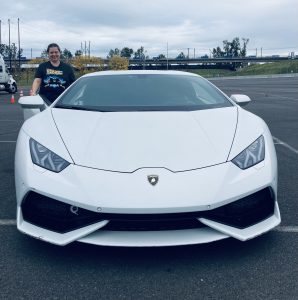 When I pulled over and we traded places, he asked me if I wanted him to take it easy or really push it so I could the true power of the car. As nervous as I can be, I love thrill rides, so I told him to push it to the limit! When he hit the accelerator, I was literally thrown back in my seat! I couldn’t help but spend most of the time giggling (I told you I love thrill rides). At the end of the ride, he told me that he’d maxed out at about 80 mph – quite impressive considering the length of the loop was quite small. I hadn’t paid attention to the speedometer while I was driving, but based on that information I figure I must not have gone more than 45 or 50. Maybe slower. So much for letting loose!

Over all, it was a really fun experience, and I’m really glad I got to do it.

Have you ever driven a luxury car?