We’ve been lucky enough to review Kwik Stix a couple of times in the past, and today I feel lucky to share with you their newest product: Thin Stix. From The Pencil Grip, Inc., Kwik Stix are a revolutionary product that allows children to paint with absolutely no mess. The solid tempera paint come in tubes not unlike glue sticks, and once applied to paper, they dry in just 90 seconds. For this review, I received one set of Thin Stix 6pk of Classic Colors. 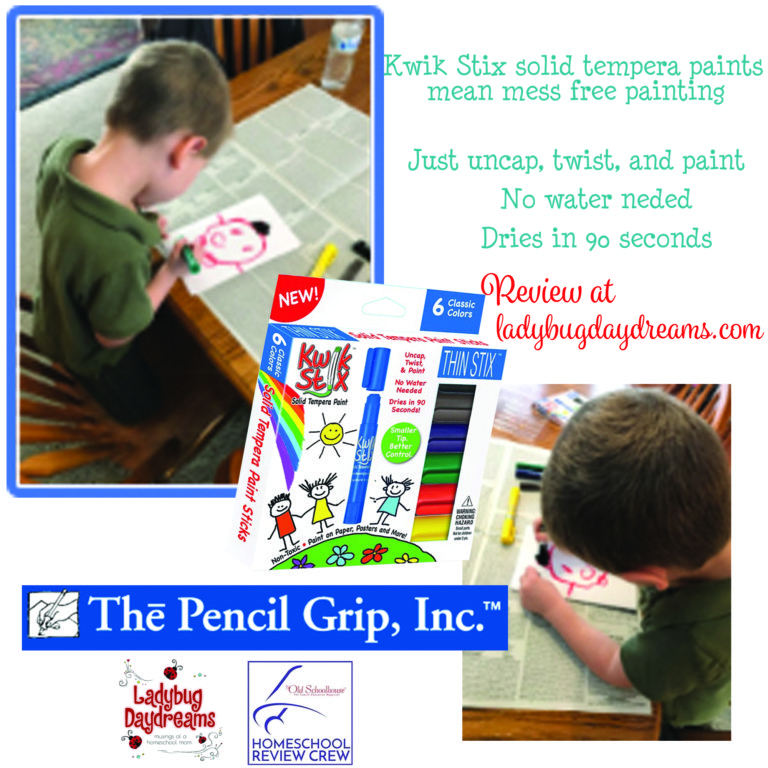 So how do Thin Stix differ from traditional Kwik Stix? Well, as the name implies, they’re much thinner. This allows artists young and old to get more detailed with their coloring. The regular sized Kwik Stix are about the size of glue sticks. Thin stix are somewhere between a pen and a glue stick. They’re not as small and detailed as a pen, but they’re considerably smaller than the original Kwik Stix. They also have a clip on the caps (like a pen). Other than that, they work very much the same.

In our family, Small Fry was the main beneficiary of the “paint sticks,” as he calls them. They arrived the day Will was in the hospital having surgery, and we were out until very late that night because of that. For this reason, he didn’t actually get to paint anything until the next day, but he was very excited about that the morning after surgery. While we waited for the phone call saying that Will was ready to be picked up and brought home, I let Small Fry paint. He chose to make a get well card for his dad. 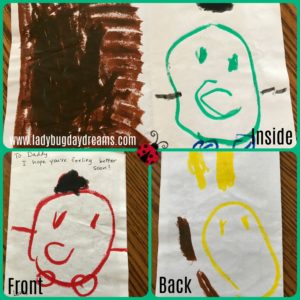 He’s at a stage in his artistic life where he draws the same thing over and over again, and this project was no exception. He used the Thin Stix to draw a Mr. Potato Head and his name. (He’s so cute about writing his name, too. He always writes his first name and last initial in capital and lowercase – he thinks the one letter twice is how to write our surname. He’s not totally wrong, either – we have that letter in two of the three syllables of our last name. But still . . . cute.)

The other thing that these got used for (and unfortunately, I don’t have a picture) was to make tiger stripes on the cardboard “armor” that Munchkin has been making for himself lately. He really likes to create things out of paperboard, and for the past several months he’s been working on a whole suit of armor. To date, he has a helmet, one shoulder guard, a breastplate, and wrist guards. During the review period for Thin Stix, he created the wrist guards. After getting them the right size, he covered the paperboard with regular white paper and used the black paint stick to draw the tiger stripes.

So, what do we think of Thin Stix? Just like their “fat” counterparts, we adore them! I can’t recommend Thin Stix enough. If your kids like doing art projects, you definitely need Kwik Stix in your life. You can purchase them from Amazon or the Toys R Us website. Even better is winning a set, though! The Pencil Grip, Inc. has graciously offered to provide a set of Thin Stix to one lucky reader of this post. Enter using the Giveaway Tools widget below. The giveaway runs from now through Sunday, May 28, 2017 at 11:59 pm PST. Good luck!