A little over a year ago, we had the opportunity to read and review our first YWAM Publishing biography (we chose C.S. Lewis to go along with our study of The Lion, the Witch, and the Wardrobe). It was okay, but we didn’t love it. Because of that experience, I was unsure about whether to request another book from them or not. Before I totally wrote it off, though, I went through a couple of the options being offered. For reasons I couldn’t place my finger on at the time, the story of Jacob DeShazer really spoke to me. I wanted to read his story, and I wanted my kids to hear it, so I requested the book, which is part of the Christian Heroes: Then and Now series. In addition to the biography, Christian Heroes – Jacob DeShazer, we also received a digital copy of the corresponding study guide (you can’t access this page without a YWAM account, but there is a generic page with the list of all the different study guides.). 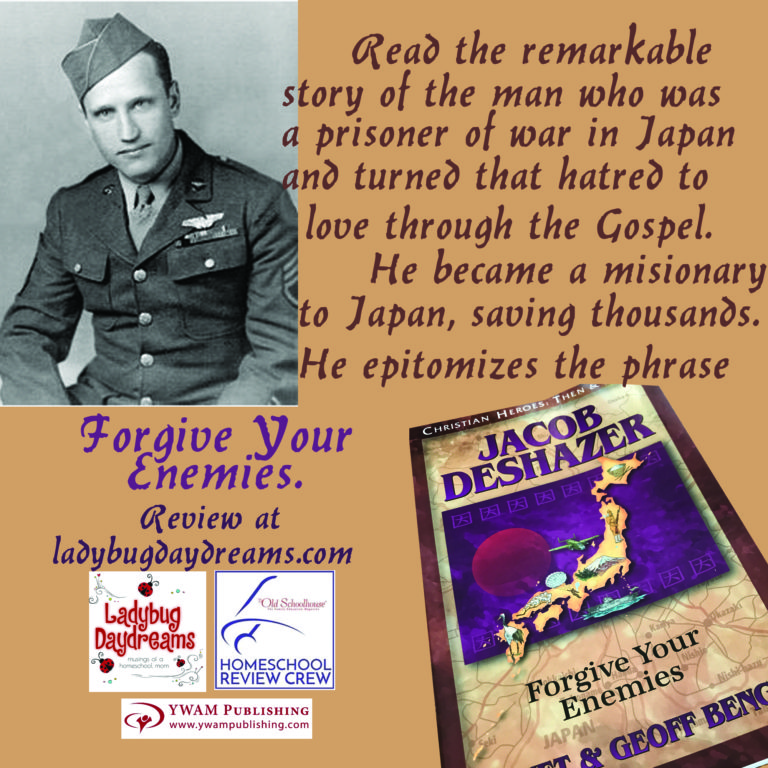 Based on the brief summary on the website, I knew that Jacob DeShazer was a soldier in WWII who was a POW in a Japanese prison for over three years. I learned that after the war ended, he was released and later became a missionary to Japan – ministering to the very culture that had imprisoned him. What I didn’t know was that when he wasn’t in Japan, he called the Willamette Valley in Oregon home – the very place where we live! I even learned that there were some people in our church who knew Mr. DeShazer personally. (He died at age 95 in 2008, so the people we know who knew him are very old and don’t always come to church so we weren’t able to talk to them, unfortunately.) 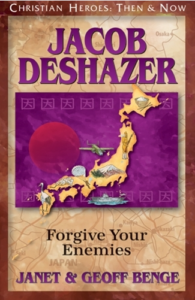 The biography opens during Jacob’s (Jake, in the book) childhood. He grew up with a mother, stepfather, and 8 siblings in rural central Oregon, on a farm. He abandoned the family’s Christian faith as a young adult, and in an attempt to get away from his parents, he took several odd jobs during his early 20s. By his mid- to late-twenties, WWII started, America entered the battle, and he decided to enlist in the Air Force to fight for the cause. Before very long, we’re following Jake through boot camp and his early assignments in California. While there, a group of men were brought in to talk to the boss and invited to join a top secret mission. Even the boss didn’t know enough to tell them what to expect outside of “it will be very dangerous.” The men were given the opportunity to accept or reject the invitation, no questions asked and no penalty for rejecting, and every single one of them accepted it. Clear up until they were on the aircraft carrier USS Hornet in the middle of the Pacific Ocean, the mission was kept secret. They eventually learned that they would be bombing Japan in retaliation of the Pearl Harbor attack in what later became known as the Doolittle Raid. When his plane crashed in Japanese-controlled China (instead of free China, where they were supposed to land) after the bombing, Jake and his crewmates were captured, imprisoned, and held for 40 months. During those 40 months (near the end), the men were given three books to share (even though they had separate cells – most of the time they were kept in solitary confinement). One of these was a Bible. Reading the Bible, Jake realized the truth behind his parents’ religion and became a Christian. His faith kept him going as his life continued to get worse.

When the war ended and Jake was released, he knew that God was telling him that he was to be a missionary – to Japan. I don’t know about you, but I know that I’d have a very hard time with this. It would be incredibly easy to be vindictive and have a “they don’t deserve salvation” attitude after going through the hardships of a prison camp (which are reasonably detailed in the book; I didn’t really mention them here). But Jake didn’t have this attitude. He knew that everyone – even the prison guards and others in Japan – deserved salvation just as much as he did. So upon returning to America, he got his discharge from the military and went to Seattle Pacific College to train for missions work in the Free Methodist Church. College is where he met Florence, who would become his wife. Florence knew that God was calling her to be a missionary, too, but she didn’t know to where. Meeting and marrying Jake made that decision for her. Upon graduation, the two of them started their family (they ended up with 5 children, 4 of whom were born in Japan – the oldest was a year and a half old when the went) and missionary work in Japan.

Because I was the one who chose this book (I didn’t confer with the boys at all on our choice), I decided I wanted to read it aloud to them. Munchkin likes to read, but mostly just the stuff he chooses to read. Seahawk is a fine reader, but he doesn’t like to read. He’d never pick up a book out of his own free will. And I didn’t want to miss this book. So reading it aloud was the best option for us. 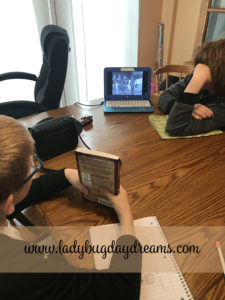 While I would have loved to have made this book a full-blown unit study, it arrived during the time we were dealing with some personal stuff surrounding our old house and moving, so it just wasn’t going to work out this time around. We did, however, use the Bible verse memorization and reading comprehension pages in the study guide. In addition to reading the book and using the questions in the study guide, we supplemented our reading by learning more about the type of plane that Jake flew (a B25 Mitchell bomber) and about the Doolittle Raid itself. We found a newsreel on YouTube about the Raid and watched that. We talked extensively about what it would be like to have been in Jake’s shoes and how we would have reacted the the situations in which he found himself. Despite not using the study guide extensively, I still feel that we had a very rich experience reading this book.

Parts of the study guide that we didn’t utilize include essay/research prompts (compare Jacob before and after his conversion, learn about the GI Bill, talk about the history of Christianity in Japan, etc); creative writing (write a haiku, write journal entries from Jake’s point of view, etc); hands on activities (make an illustrated timeline, build a model B25 bomber, learn Morse code, etc); audio visual (make a website about Jacob De Shazer, etc); arts and crafts (illustrate Jake’s life using Manga techniques, create origami, etc); language (learn a few phrases in Japanese); and much, much more. With the proper preparation and materials, it would be really easy to use the study guide and biography together to make an amazing unit study.

Our first time reading a YWAM Publishing book, as I mentioned before, was “just okay.” Our second one could not have been better. I literally had a difficult time reading the last few pages to the boys because I felt like I knew Jake by the end, and reading about his dementia and death were devastating. I cried. I cannot recommend this book enough, and I truly hope more people will read it and learn the story of how one man – Jacob De Shazer – was able to forgive his enemies.