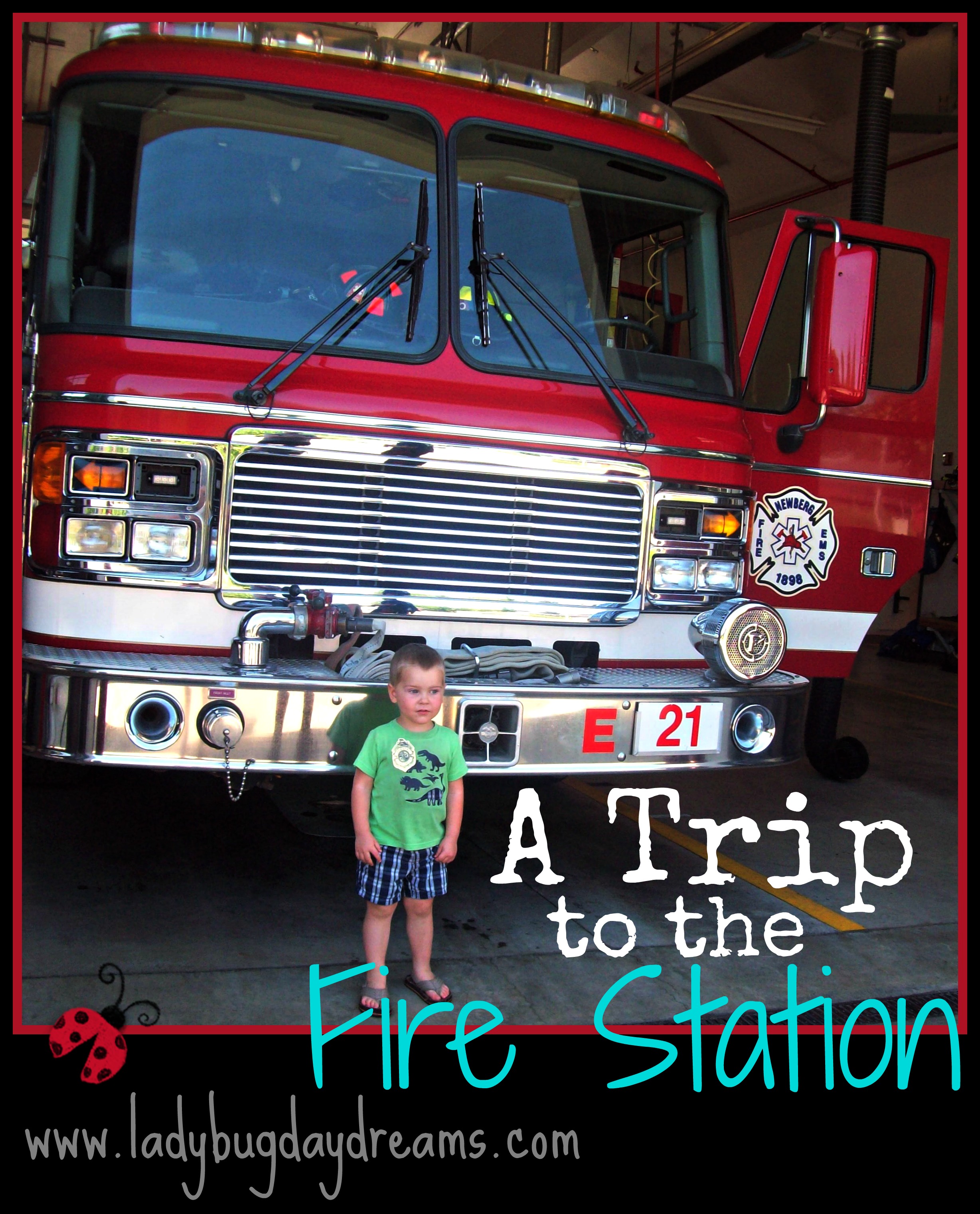 Last week, the big kids were at VBS (Munchkin as an attendee, Seahawk as a helper with the other members of the youth group). Small Fry was too young to attend, so we had him at home with us each day (Will worked from home most of the days last week). We did our best to make sure he had fun things to do so he wasn’t feeling too left out from going to church – which is one of his favorite things to do. Every single morning, he says to me, “Go church?” because he loves attending Sunday school and children’s church classes so much.

One of the things on the list that we wanted to do with him was attend Public Works Day at the library. Each June, the city brings several of their big machines (bulldozers, front end loaders, dump trucks, cherry pickers, etc) to the library parking lot for kids to climb around in and on and learn all about. I thought Small Fry would really enjoy this; I know the big boys did when they were younger. So I looked at the calendar and saw that Public Works Day was scheduled for Thursday, so we made plans to do that with him.

So, Thursday morning arrived, and we took him to the library. There were no machines in the parking lot. We thought maybe they were just running late or something, so we went inside to ask about it and were told that it had happened the day before.

So we explained to Small Fry (as much as you can explain things to an almost-3-year-old) that we’d missed it, but we would find something else fun for him to do. As we were walking to the car, Will had a great idea: we’d go to the fire station and see if they would be willing to give him/us a tour. So that’s just what we did.

There was a very nice firefighter (whose name I didn’t get, unfortunately) who was more than happy to show us around the fire truck.

By the time we got there, we only had about half an hour before we had to pick up the big kids from VBS, so it was a quick tour, but Small Fry really enjoyed himself. He had one-on-one attention from a firefighter, which I think was even better than the none-on-one attention he would have gotten at Public Works Day (there aren’t really any workers around at that, except to make sure the kids don’t accidentally release the parking brakes or something similar).

The firefighter showed us the inside of the fire truck – and let Small Fry sit in there, including running the siren and beeping the horn. We got to see the front seat of the truck as well as the back seat, and he got to use the walkie-talkie radio to talk to Will. (The firefighter gave Will the second radio and had him go to the back of the truck so Small Fry could talk to him through the walkie-talkie.) 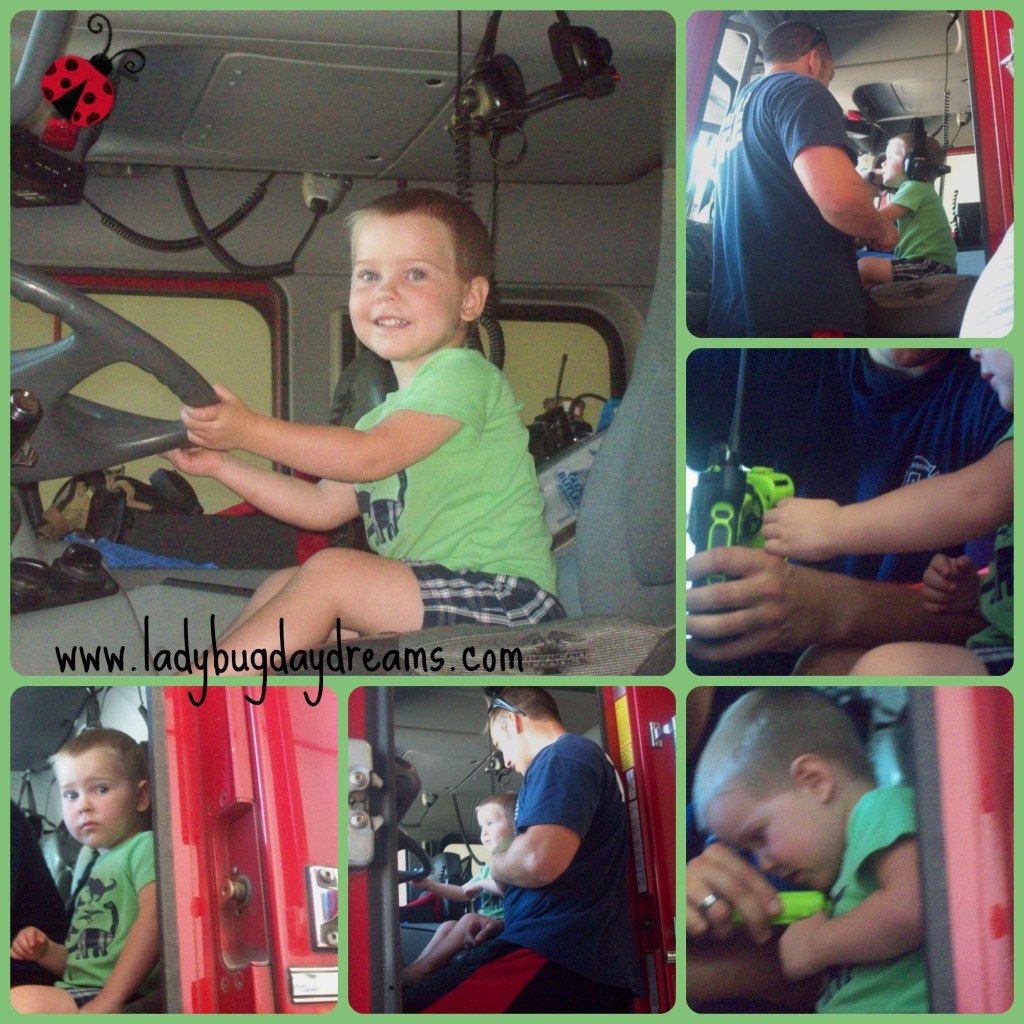 When we’d finished the truck tour, we went out into the training area where our firefighter hooked up a fire hose to the faucet on the building. Before he turned it on, another firefighter was pulling one of the other trucks out of the garage, so we got to watch that one move. Then it was time to spray the hose!

This was definitely the highlight of the trip for Small Fry. The firefighter let him hold the hose – actually, there’s an apparatus that hooks onto the hose that’s kind of a cross between a nozzle and a squirt gun, so that’s what he held – and spray the training area. He showed us how they have different spray options, much like a bottle of window cleaner. It could “stream” or “spray.” The firefighter was even a bit of a jokester and had Small Fry aim the water at one of his colleagues across the training area. 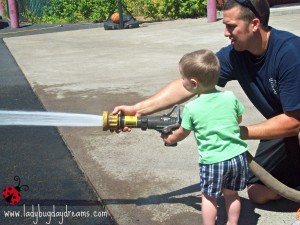 We took plenty of pictures, of course, and had them printed out for Small Fry. He’s been showing anyone who will look at them (so far, his two “Papas” – my dad and Will’s dad – and “Lala” which is how he pronounces Will’s stepmom’s name). It’s adorable how proud he is of his pictures. And now, he’s asking nearly every morning, “One-a more whooooo?” Meaning, “Can I go on the fire truck again?” (Literally, “One more time on the {insert siren sound here}?”)