During my drives to and from the gym, I like to listen to audio books. (I hate listening to music in the car. I find it oppressive.) I recently finished Troublemaker: Surviving Hollywood and Scientology by Leah Remini. I’d heard of the book years ago, and was a low-key fan of Remini’s (I remember her from her Saved by the Bell days, and my husband and I used to watch The King of Queens regularly). I remember her explosive separation from the Scientology religion in 2013. And last year (earlier this year? I don’t remember exactly) I watched the A&E show on Netflix that she and Mike Rinder (another former high-end, though not celebrity, Scientologist) did together. So I was interested in reading/listening to the book. I wasn’t able to find any “book club questions” for this book, so I’m just going to ramble about it for a little while. 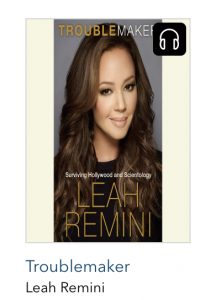 The audiobook is read by Remini herself, and as I mentioned before I’m already familiar with her and some of her work, so I wasn’t distracted or surprised by her thick New York accent. I enjoyed hearing her tell her own account of her life, especially some of the more “explosive” Hollywood stories. But let’s not get too far ahead of ourselves here.

Leah Remini was born and raised in New York. Her parents divorced when she was young, and she spent time with each of her parents separately. When her mother got remarried (to a Scientologist), she swept Leah and her sister into the church with her. They quickly moved through the lower ranks, eventually landing themselves in the “Sea Org.” Even after watching three seasons of the show and listening to this book, I don’t have a super clear understanding of the Sea Org, but I’ll do my best here. The Sea Org is one of the highest levels of “clergy” (though that’s not quite the right word) that civilian members of Scientology can reach. Members are recruited, and when they’re brought in to be offered a spot they are expected to sign a billion-year contract. You read that right; it’s not urban legend. Adults and children (Scientology views children as “adults in young bodies”) are required to sign a contract promising a billion years of servitude to become members of the Sea Org. Remini became a member at (if I remember correctly) age 13. Her sister was one year older, and her mother also signed at the same time.

The following chapters, covering her time in the Sea Org, are full of horrors. There were two stories that stood out to me the most. Both took place long before she was a legal adult.

In the first story, she tells of how she was put in charge of a battalion (not the right word, but it conveys the right idea) of other Sea Org members. She was a young teenager at this time in charge of a group of other teens and adults (remember, children are considered small adults) and given a job. She figured that the main goal of the job was to get the job done, so she motivated her team and they finished early. Because they had time to spare, Leah – in her teenage wisdom – gave her team permission to lounge by the pool. (She and her family were living in Clearwater, Florida, the home of Scientology, by this time.) They were caught by a higher ranking Sea Org member, and he took her and her entire team out to sea on a raft. This man insisted that she apologize to him and call him “sir.” She struggled with this; even though it was a fairly simple and painless way for her to get out of trouble, she just couldn’t bring herself to call him Sir. She’d been trained by her religion that all members were equal – she was just as important as he was, so why should she be forced to call him Sir? When she refused time and time again, he eventually threw her overboard. She almost drowned in the water that day.

The second story from that time that struck me was the time Leah was checking in on the nursery. As a teenager, like most teen girls, she had a heart for the babies. The fact that she had a new sister in that nursery (her mother and stepfather had a baby after the family moved to FL) didn’t hurt. She went in to check on her baby sister and found the conditions horrendous. Babies were left in cribs for hours on end with no care. There was a teenager in the room, but that person didn’t do anything to care for the children – no feeding, no diaper changes, no playing. Nothing. Hearing that story made my heart so sad.

After her time in the Sea Org, we get into some of the more interesting (to me) parts of Remini’s life: her time in Hollywood. I enjoyed hearing about her acting auditions, her (many) shows that had varying levels of success (but mostly failure). The jobs she took after the Sea Org but before she “hit it big” were also interesting – waitressing, becoming a secretary and then personal assistant for someone she knew, and others. I enjoyed hearing her tell her own stories with her very unique sense of humor. She can definitely make fun of herself! I found it interesting to learn that she took the Saved by the Bell job because she literally needed to pay the rent on her family’s apartment. Before long, she landed The King of Queens, though. (I say “before long,” but that’s really just in terms of the book. I’m sure it was many years, and a whole lot of frustration on her end.) I wish she’d spent more time talking about her time on that show, but I was glad to hear the parts she was willing to share. It was lovely to hear that her co-star, Kevin James, was as nice as he seems to be.

Near the end of her time on The King of Queens, we entered 2006. If you follow Hollywood really at all, you might remember that as the year Tom Cruise and Katie Holmes got married. Their wedding in Italy was the beginning of the end for Remini and Scientology. I’m already getting pretty high on my word count, so I’m not going to go into very many details here. But let’s quickly summarize a few of the main events from that trip.

There is so much to this book, and I couldn’t possibly talk about it all here. If you’re interested in Hollywood, or Scientology, or how one goes about escaping from a cult, I recommend this book. I found it very engaging.

Next month in Book Club, I’ll be talking about The Guardians by John Grisham.