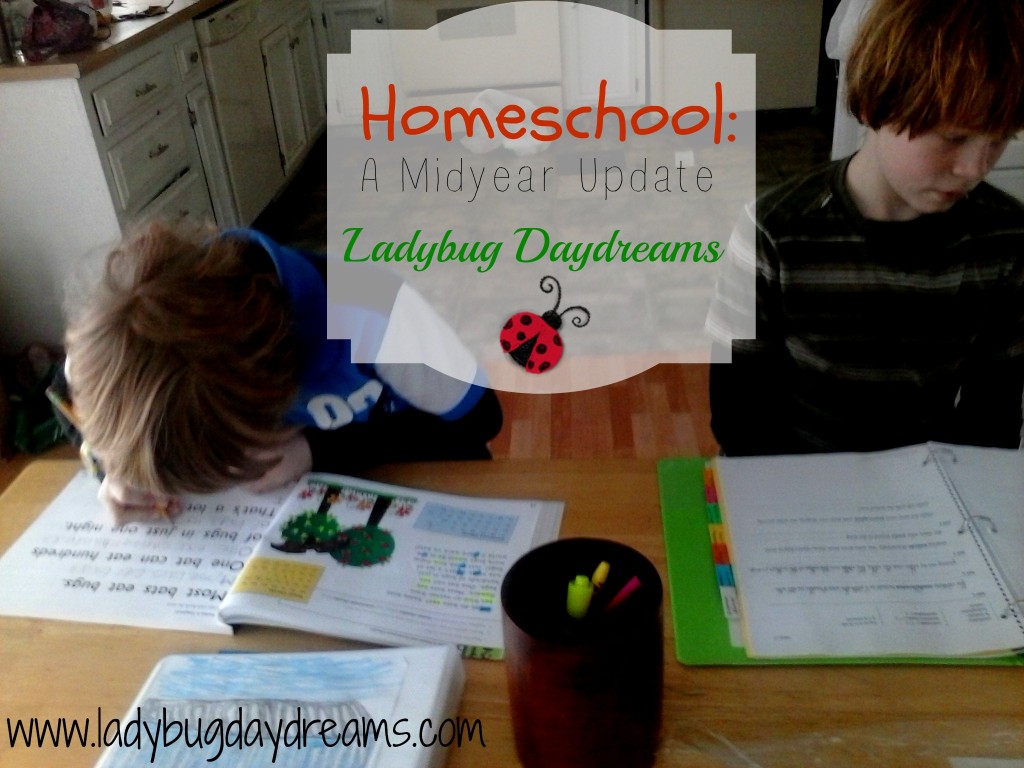 While we’re not technically halfway through the school year, it seems that the year is most easily broken up into two segments: Before Christmas and After Christmas. Thus, it seemed like a good time to revisit our original schooling plan that I talked about in September and see what we’re still doing that’s working, what we’ve dropped for one reason or another, and what we’ve added in.

I’d planned to use What on Earth Can I Do? from Apologia Educational Ministries. We used it for a while, and I do plan for us to finish it, but we haven’t picked it up in a couple of months. Instead, we’ve been working through another resource from Apologia: the iWitness series. These books are really neat, and they offer a whole lot of insight into why the Bible is the way it is (how books were selected, etc…) as well as one on biblical archaeology.

Originally, I thought Munchkin would end up using Seahawk’s Spelling You See workbook. That never happened. We’ve done a few different things under the “spelling” umbrella so far this year. We used some of the Daily Puzzlers from SchoolhouseTeachers.com. We tried spelling lists, also from SchoolhouseTeachers.com. Finally, I’ve decided to give Spelling You See another go with Seahawk. We had the second workbook completely untouched (the program takes two workbooks over the course of the school year), so he’s working through that. I really, truly hope that I’ll see some improvement in him again. We’re going over the work a bit slower and more deliberately than we were toward the end of the school year last year, when he stagnated, so hopefully that will help. And in his writing, I’m trying to push him to think through the letter patterns he’s studying with SYS. The verdict’s still out on any improvement, but with diligence on both our parts, I have hope.

Fix It! Grammar is still in regular rotation in our home. I seriously think this is my favorite program we’ve ever used. I love how it teaches the different kinds of words (nouns, articles, pronouns, etc) as well as how to use them. We’re almost halfway through the year one book, and I can already tell that the boys have learned (and retained) tons of information. They were writing a story a few weeks ago, and it was clear that their grammar lessons were helping them. Not only were their sentences properly formed, but they were varied and interesting. It really makes a homeschooling mama proud to see that kind of thing.

As regular readers of my blog know, we’ve kept up on reading a lot of different books in our home. The kids are required to read at least one book per month, and they’ve done really well with that. Since I assign them the books, they’re being exposed to a lot of different kinds of books that they might not choose on their own, and I’m pleased to say that they love (almost) every book I choose for them.

We did quite a few of the My First Reports, but took a break over the Christmas holiday. We’ll most likely pick those back up in a week or two.

Both boys are still working through the handwriting workbooks we got for them. They seem to really be enjoying these workbooks (as much as they can enjoy a workbook, anyway), so if you’re in the market for a handwriting practice book, I definitely recommend Handwriting: Writing with Power by Christian Liberty Press. (That’s not a plug or a review; just the opinion of one homeschooling mom to another – assuming you are a homeschooling mom.)

I’m afraid this is one area we’re lacking. We did the human body speedy lapbooks as I’d planned, and that’s been about it on the science front. To be fair, a lot of the My First Reports were Small Animals, so those can qualify as science (biology) as well as Language Arts, but we haven’t done any specific science instruction.

I just got word earlier this week, though, that we get to review Visual Learning Systems, which is an online science program for all ages (K-12). That will be really good for us. Keep an eye out for that review in early March.

I’m sad to say that TruthQuest History didn’t work out for us. It was a wonderful program, but our library just didn’t have the resources necessary for us to do TQH as it was intended.

Instead, we’ve been reading The Light and the Glory for Young Readers by Peter Marshall and David Manuel. In case you aren’t familiar with it, this is a book about American history shown through the lens of God’s work. The Light and the Glory is book one and covers 1492-1787 over the course of 16 chapters. We’ve finished 15 of them so far, and have just wrapped up the Revolutionary War. We read about two chapters a week, so pretty soon I’m going to need to spring for book 2 in the series :). Each time we read a chapter, I have the kids do a notebook entry with a short summary (in their own words) of what we read along with a picture. They seem to be really enjoying this.

This is an exciting subject for us. For Christmas, Will splurged and got me/us Rosetta Stone French. All four of us have been working through it, and we’re making some really good progress. (Small Fry is the only one not doing it, partially because he’s only two, but mostly because he barely speaks English yet. Since he’s slow to talk, we don’t want to push him in two languages. When he catches up to where he’s supposed to be in English, we’ll work on French with him.)

I didn’t talk about math back in September, but know that we have been working on it. We’ve been continuing to use our subscription to CTC Math (that we got as a review last year), and it’s working pretty well. There are some things that are tricky to understand with it; I’m not sure if it’s because it’s an Australian program that’s been converted for American students or if it’s because it follows Common Core, but some of the terminology is difficult to comprehend, even for me. In either event, it’s still a solid program, and I like that the boys can essentially do math on their own. (CTC has a video lesson for the teaching portion followed by a “questions” portion which is essentially a worksheet.) Once I get them logged in and the lesson selected, they’re off and running.

So that’s how our school year’s been going. How about yours?

P.S. Did you notice my new header?! We just got it back from the illustrator last week, and I love it!