Knit and crochet have a few things in common and a lot of things different. Let’s talk about crochet first. 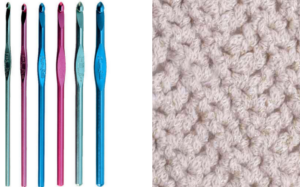 Crochet is done with yarn and a single hook. This hook can be any number of sizes (just like knitting needles, as I discussed earlier this month). The size of the hook will determine the size of the stitches. Crochet has dozens of different types of stitches, and they each look a little different. Building them on top of one another allows you to make things like hats, blankets, scarfs, and more. Because of the way the stitches lie, the fabric you create crocheting often takes on a chevron-type feel, even if the edges are perfectly straight.

Knitting is done with two needles, and the fabric you create is much thinner and smoother than crochet fabric. When you see a sweater in the store that’s made up of tiny V shaped stitches, that’s knit (although I’m pretty confident the clothes in the store are machine knit). 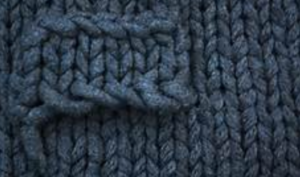 Both are essentially looping yarn around itself to make a solid piece of fabric. The way knitting or crocheting differ from sewing is that instead of taking fabric and cutting it into the shape of piece you need to create a garment, you just make the fabric that shape in the first place.

There was a time in my life (when I knew how to crochet but not knit) that I thought people could only really master one of the two crafts. I knew tons of people who could crochet and tons who could knit, but none who could do both. (It turns out my father-in-law can do both, but I didn’t realize that at the time.) Even though I liked crochet, I didn’t love it, but I’d practically resigned myself to never being able to knit because it was one or the other and I already knew crochet. Silly, huh? I’m so glad I didn’t stick to that mantra because I love knitting. I love it in a way I never really did love to crochet. I’m glad I have both skills, but knitting is definitely my preferred craft.

Neither one is better than the other; it’s all a matter of preference. Both have their own kind of beauty (though I vastly prefer the look of knit to the look of crochet, which is why I don’t really do the latter anymore), and both can be very rewarding. I just like the versatility of knitting better – it’s better for a wider variety of projects. If you’re in the “market” to learn a new craft, I recommend knitting. But if you’re worried about being able to handle two needles and the yarn all together, then by all means – try crochet. You can always learn to knit later.