I’ve read a few YWAM Publishing books in the past, but always with my older boys. I was excited when the opportunity arose this time because Grasshopper (7 years old) is old enough to listen. We chose from the Christian Heroes: Then and Now series, Corrie ten Boom: Keeper if the Angels’ Den. I chose this book for two reasons. First, Corrie ten Boom was used as a sermon illustration by our pastor at church a few weeks ago (around the time we were selecting the book we wanted to review). Second, Grasshopper and I had read another true story from the WWII era this school year (Sadako and the Thousand Paper Cranes), and he wanted to learn more. 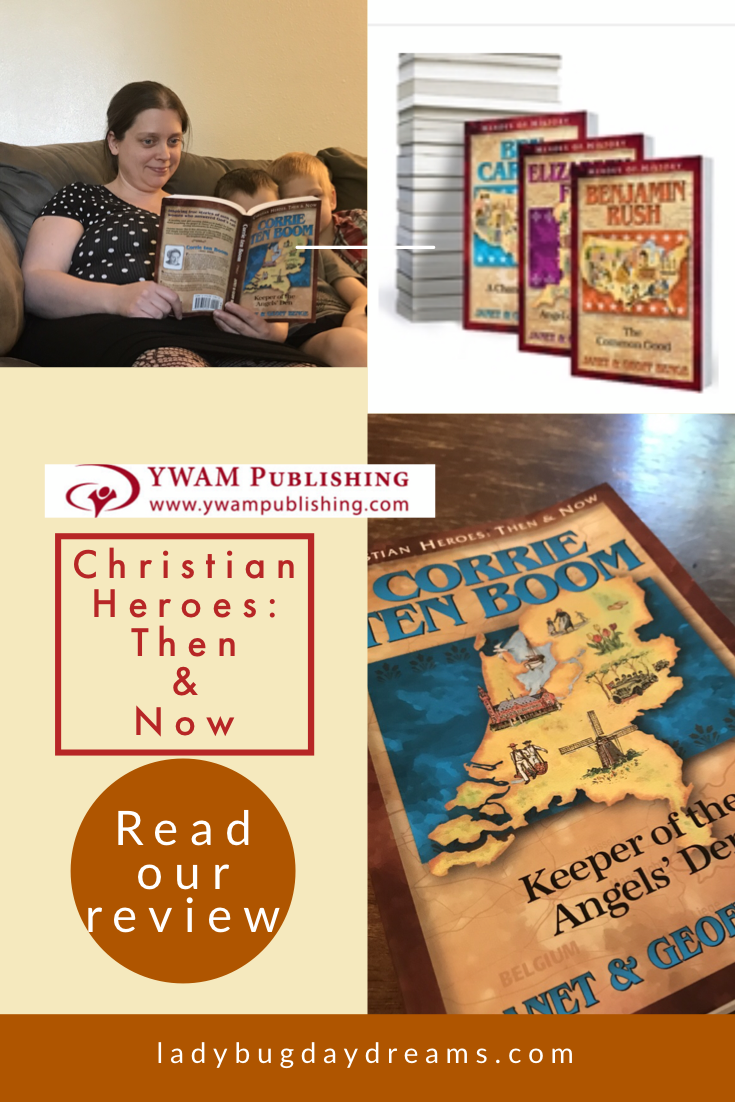 YWAM Publishing started in 1972 as an outreach of YWAM (Youth with a Mission), printing and distributing gospel tracts during the Munich Olympics. Within the first year, they had expanded to books, distributed all throughout the Eastern Bloc countries. Now located in Seattle, they have over 300 titles of their own. They also work as distributors for other Christian companies, selling books, DVDs, and resources for homeschooling families.

YWAM Publishing’s Christian Heroes: Then and Now series has 49 books, and their Heroes of History series has 29 titles. Many of these also have study guides to make the biographies into a complete unit study.

Corrie ten Boom was a watchmaker in her father’s at-home clock shop, the first woman of the trade in the Netherlands. She was misdiagnosed with tuberculosis as a teenager and spent 6 months in bed because of it (turned out to be appendicitis). As a young adult, she created many clubs for other young men and women in her town; within just a few years one of her clubs had grown to many hundreds of members and their annual performance drew an audience of more than 1000.

The Germans invaded Holland in 1940, when Corrie (properly, Cornelia, makes after her mother) was 48. They promptly shut down her clubs. Two years later, in 1942, a woman showed up on their doorstep, claiming to be a Jew in need of help. Casper, Corrie’s father, agreed immediately. He read the Bible twice a day, every day, to his family and believed with all his heart that the Jews were God’s chosen people, and he would therefore do anything he could to help them. This the ten Boom home, Beje (bay-yay), became known as The Hiding Place.

On February 28, 1944, all of the ten Booms were arrested after having been outed by a Dutch informant. Her father and sister, Betsie, died in custody.

After the war, Corrie was released and became a world traveler, public speaker, and author. Her most famous book is The Hiding Place. She died on her birthday in 1983, at age 91.

How we used it

As suggested, Grasshopper and I read (well, we are still reading) this book together. I didn’t use the full study guide (of which I received a digital copy), but I have been utilizing the comprehension questions with him. He was very wary about starting to read the book, but from the very first paragraph he was hooked. He has asked to read more regularly since I convinced him to start listening the first time. In summary, YWAM Publishing biographies have found a new generation of love in my family!

Members of the Homeschool Review Crew are reviewing a variety of YWAM biographies this week, from both series. Make sure to click through and learn more!