The little boys (ages 5 and 2) and I have had the pleasure the past few weeks of reading a few books by Carole P. Roman. We were able to choose three books from the Carole P. Roman books and collections. I opted for one chapter book, one fun picture book, and one learning picture book for us. All of the choices have been huge hits with my children, and I’ll take a few minutes here to discuss each one. 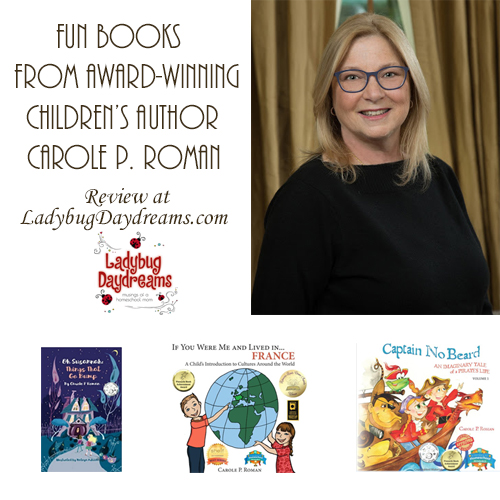 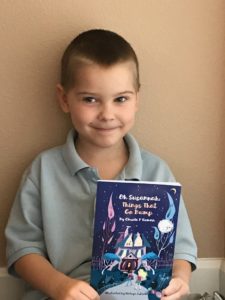 For our chapter book, I picked Oh Susannah: Things That Go Bump ($6.99 paperback, $0.99 Kindle). This book is about 40 pages, divided over 10 chapters. It tells the story of a little girl named Susannah who is going to be having a sleepover at her friend Lola’s house. The only problem is that Lola lives in a haunted house! Not really, but it is a big, old, creaky house, and Susannah is afraid to go there. Over the course of the novel, Susannah comes into contact with characters (her parents and other friends) who help her see the world – especially the scary parts – in new ways. Susannah is very skeptical, and the first bit of her time (2 or 3 chapters) at Lola’s is just as frightening and nerve wracking as she expects. But by the end of the book, she learns that some things aren’t always as they seem.

I’m glad I had a chance to read this book (we read 1-2 chapters a day, depending on length) with Small Fry. Even though a few sections were rather creepy and scary for him, I feel like it helped him learn that it’s better to talk over your feelings and push through things that you’re afraid of (within reason). 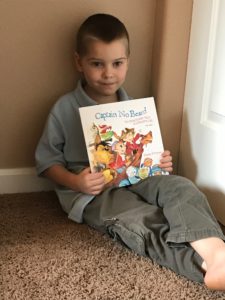 The fun picture book we chose was Captain No Beard: An Imaginary Tale of a Pirate’s Life (volume 1) (currently on sale for $5 paperback, $1.99 Kindle). Because Captain No Beard is a typical picture book, we read it in one sitting – and have since read it dozens more times!

Captain No Beard is the story of a boy, his cousin, and a crew of animals out on the open sea. Together, they learn some pirate words, spot land, rescue one of the members from falling overboard, and have a conversation with a mermaid. There’s a fun reveal at the end that completely caught my boys by surprise (though a grownup should be able to guess is based on the title of the book). They had so much fun with this book; I don’t think they stopped laughing once through the whole thing. I loved reading them a book that they so clearly loved hearing. They will love to get another volume of this series one day soon. And yes, Dragonfly did listen with us even though he’s not in the pictures. He’s not feeling very well this week and was being a bit stubborn at photo time. 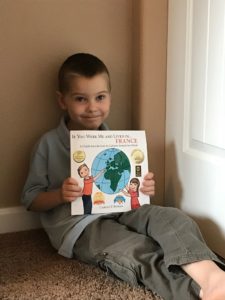 The final book we received was If You Were Me and Lived In… France ($9.99 paperback, $1.99 Kindle). Because we’ve been studying French as our foreign language for several years (less than we should recently, since my laptop went kaput several months ago), I’ve wanted to get this book for the kids for a while, but it hadn’t happened yet. I’d intended for the big kids to read it on their own, and while they did we also had a side benefit that I hadn’t anticipated with this title: the little kids love it too! Just this morning, Dragonfly (2) brought it to me and asked to “read.” Of course I obliged! From nearly the first page, he was even repeating some of the French words after me.

We have had such a good time with all three of these books by Carole P. Roman. Her books are super fun, even those that are more educational than “just for fun.” I am so glad we were blessed to receive these books for review.

Members of the Homeschool Review Crew are reviewing a large selection of books from the Carole P. Roman books and collections this week. Make sure to click the banner below to find out more! And if you’re the social media type, you can find Carole on the following platforms: