My husband has wanted a boat for a long time. A really long time. But we have a couple of other “big” goals that need to happen first. But a couple of weeks ago, he took the first step toward getting a boat anyway – he took the DMV boater’s class and got his boating license! And we headed to a (fairly) local lake where we rented a pontoon and spent the afternoon on the water.

To get to the lake, we had to drive about an hour and fifteen minutes. Of course, with eight people (and two cars), that ended up being over three hours because we had to stop for lunch on the way. And to get coolers and drinks to take on the boat.

Will had reserved the boat earlier in the week, so when we arrived at the lake it was smooth sailing (pardon the pun) to get the rental finalized and load everyone onto the pontoon. He had just finished his boating license course really late the night before, so this was to be his first time driving a boat. This meant he was a bit nervous in the beginning, and it took us quite a while to get out of the “no wake” zone and into open water. We had a lovely time just puttering around the lake for about an hour and a half, but then someone had to use the bathroom (of course!). So we found a dock that had facilities and made everyone go so we wouldn’t have to stop again. Though, it turned out that the restroom was right near the swimming hole, so everyone but Will spent some time in the water. I’d forgotten my swimming suit, so I just went in ankle deep, staying with Bumblebee, who just kicked his fear of water (literally everything water, even basic stuff like handwashing) the night before. He did great going into the lake and getting his feet “all wet” (his words). Everyone else (Ballet Boy, his girl friend, Scorpion, Grasshopper, and Dragonfly) went out much deeper in the water. The younger kids wore life jackets. Will undocked the boat and sailed around while we all played in the water.

An hour before our rental was up, we loaded everyone back onto the pontoon to finish out the afternoon. Will had so much fun driving the boat, and by the end of the 3-hour-rental, he was much more confident. What had taken 15 minutes when we left the dock (navigating through the no wake zone) only took 5 at the end of the trip. And we finished the evening up with dinner at one of our favorite Mexican restaurants. 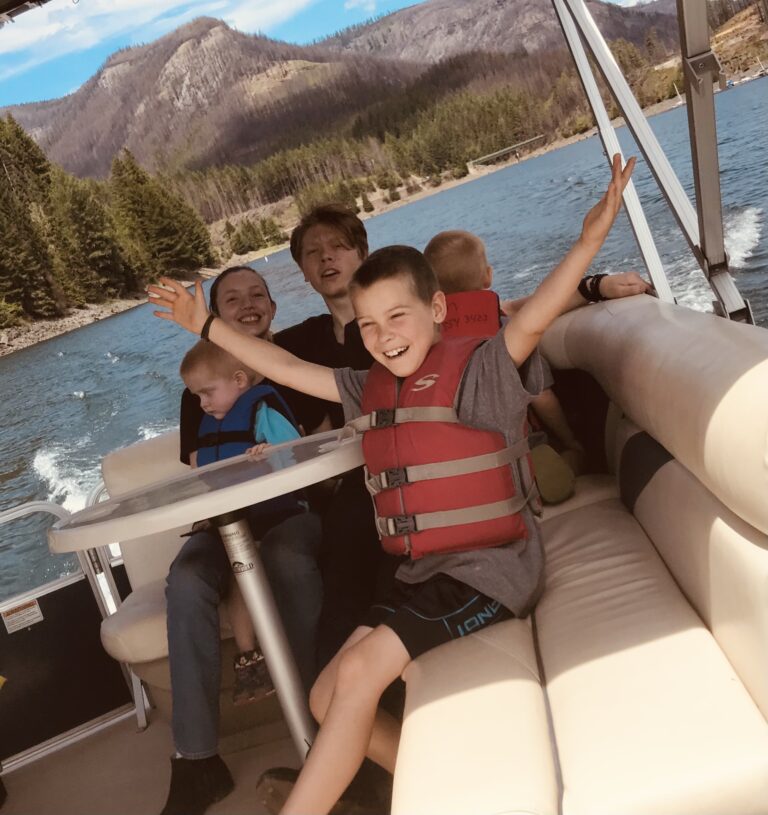 Have you ever been on a pontoon? Did you drive, or were you a passenger?