One of the biggest setbacks to a “regular” school schedule is the possibility of losing ground over summer break. This is especially true with math and reading, though reading is easy enough to keep practicing. But math can be a lot harder to stay motivated to work on when it’s “off time.” This is especially true if your student has only recently mastered a new concept – like multiplication or division facts. Math Essentials has an answer for that, though: Math Essentials Speed Wheel Drills! We received all three of the titles in this series: Addition, Multiplication, and Division. 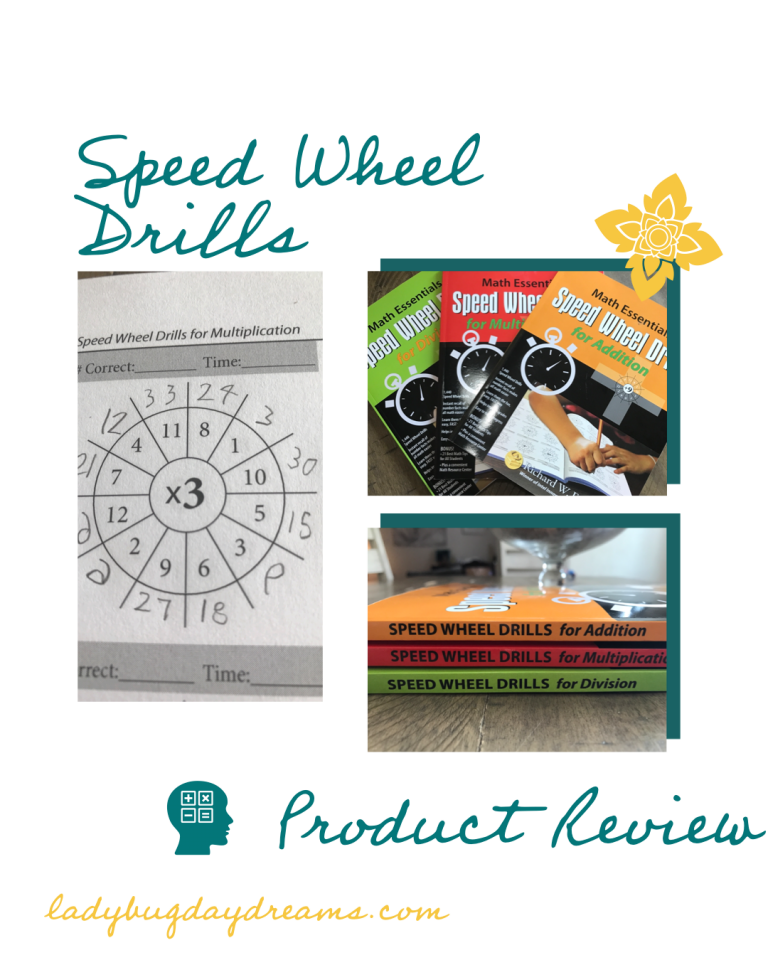 What is a Speed Wheel Drill?

While you may not have heard of a Speed Wheel Drill, once I describe it, you’ll understand where the name came from because it really is exactly what it sounds like. On each page of the consumable workbooks, there are a series of circles. Each circle (wheel) has two smaller circles within it, and a series of spokes coming out. In the very center is a large number (3, for example). In the center section are a series of other numbers, a bit smaller than the center number (7, 5, 2, etc). Your student simply uses the center number as the “base” for each math problem, and then does the specified operation (depending on which book you have), writing the answer in the outer circle. So, with 3 as the center number and 7 as one of the middle numbers, in the multiplication book the child would write 21. Next to the 5, he would write 15. The 2 would get a 6. And so on.

There are a couple of different ways you can use the “speed” portion of the Speed Wheel Drills.

How We Used the Workbooks 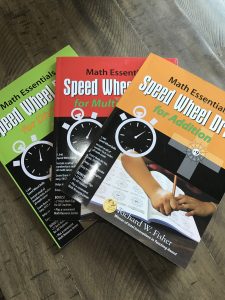 My older boys are well versed in their math facts, so I didn’t bother giving these to them. Because we received all three books, which are ideal for different ages, I set up Grasshopper (9, heading into 4th grade) with the Multiplication book and Dragonfly (5, K) with the Addition book. We set the Division book aside for later.

Grasshopper has gone through all of the multiplication lessons in his math curriculum, and has done quite well with them. But that curriculum only has a single lesson for each set of the times tables, and that’s just not enough practice to really master such an important concept. Adding in Speed Wheel Drills has been perfect. We started without the “speed” aspect, just to see how he’d do, and he did pretty well. As I could tell that he was getting quicker with each successive wheel, I introduced a timer. I opted to use the second method that I described before with him. It was great to watch him continue to get faster and faster throughout the summer. And Grasshopper is a kid who loves to best himself, so this type of workbook is perfect for him.

Dragonfly, being just 5, is reasonably new to addition. He’s done a little bit here and there, but his math up to this point has been primarily number recognition, patterns, colors, shapes… you know, Kindergarten stuff. He’s very good at that now, though, which means it’s time to begin some of the more difficult things. We used the Speed Wheel Drills Addition book as a gentle introduction to adding for him. He was a bit confused about how the wheels worked until I explained it to him, and then he thought it was such a great idea. He warmed to the concept very quickly, although he got frustrated with trying to write the numbers himself. We found that they worked better almost as oral drills, and I wrote his answers down for him. We haven’t timed him at all yet.

Math Essentials Speed Wheel Drills are fantastic resources for students. You can use them during the summertime like we did, or as a supplement to any math curriculum. My kids thrived with them, and I can’t recommend them enough.

Make sure to click through to see what other members of the Homeschool Review Crew think of the books!