STEAM, and its cousin STEM, are hot words in education right now. In case you’re unfamiliar, it’s a heavily science-based approach to learning. The acronyms stand for Science, Technology, Engineering, and Math. STEAM also includes Art. Despite its trendiness, we haven’t explored STEAM or STEM much in our family. Because we expect our children to join the family business rather than leave the nest, it’s not a priority. But I was still curious about STEAM4KIDZ when the opportunity was given to review it, and I was happy to have received the Ocean Ventures Kit to try out with some of my younger kids. 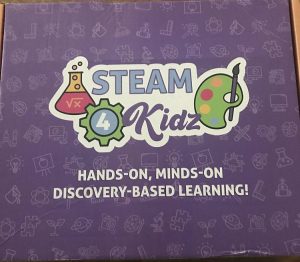 I requested the Ocean Ventures Kit (we were also given options of the Starry Night Kit, the Mini Theater Kit, and the Galactic Adventures Kit) because we live so close to the Pacific Ocean – only about 40 miles away. I wanted the kids to have a chance to learn about the place we spend so much time during the summer months, and this kit definitely delivered!

STEAM4KIDZ offers complete kits for families to easily teach STEAM concepts in a fun and engaging way while children make real projects with hands-on learning. Each kit comes with literally everything you need to create between 5 and 7 projects. This includes things that many families probably have on hand already, like scissors and tape. But STEAM4KIDZ doesn’t want you to have to worry about tracking down your supplies, so it’s all included right in the box. In addition to the projects in the box, there is access to the video lessons. These lessons walk your student through exactly how to create the project as well as teaching them about the thing they’re making. For example, when Grasshopper (10 years old) made the clay coral, he also learned so much about coral while he was sculpting. 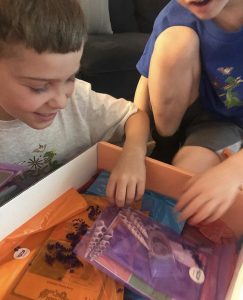 In addition to the clay coral, the Ocean Ventures Kit includes everything needed to make a model of the ocean floor, a shark-tooth necklace, an “ooey gooey jellyfish,” and a seashell windchime. The items needed for each project are separated into plastic bags and labeled for easy access. The more generic things, like scissors and colored pencils, are not included in any of the project bags but are instead tucked away inside a pencil pouch. (And as a side note, these are some of the sharpest scissors I’ve ever used. They’re fantastic, though you want to be careful with younger learners so they don’t cut themselves.)

The video lessons are really fantastic. As I mentioned, in addition to walking your child through everything they should do to create a beautiful end project, they also give loads of information about the thing being made. One thing I wish was that the link for the videos (they’re hosted on Vimeo) was in more than one place within the kit. It seemed that I could never find the exact right paper with that link on it! Eventually I wised up and bookmarked the website on my laptop. 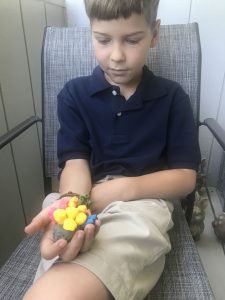 I didn’t tell my kids that this was coming in the mail, and when we got home from errands one day and they saw the colorful box on the stoop, they were absolutely giddy. We immediately moved the box to the coffee table in our living room and did an unboxing (that’s over on Instagram if you missed it). They were so excited that they wanted to do one of the projects right then! If that’s not proof of how exciting these kits are for kids, I don’t know what is. I absolutely recommend the STEAM4KIDZ kits. They would make a really good base for a summer camp, too. Kind of like VBS crafts, but better!

As I mentioned above, Crew members were given the option of the Starry Night Kit, the Galactic Adventures Kit, the Ocean Ventures Kit, or the Mini Theater Kit. Head over to the Homeschool Review Crew website to learn more about the individual kits and read reviews of each one, too.