Reading the Bible is an important part of the Christian faith, even for the youngest among us. Most versions of the Bible, though, are written for teens and adults, making it difficult for children to understand. You might see a lot of “picture Bibles” available, but those aren’t really Bibles; they’re more simplified Bible-inspired stories with large illustrations for babies and toddlers. Once kids are able to read at a basic level, they really should have a “real” Bible for their own studies, and that’s exactly what the NIrV Adventure Bible for Early Readers from Zondervan is. 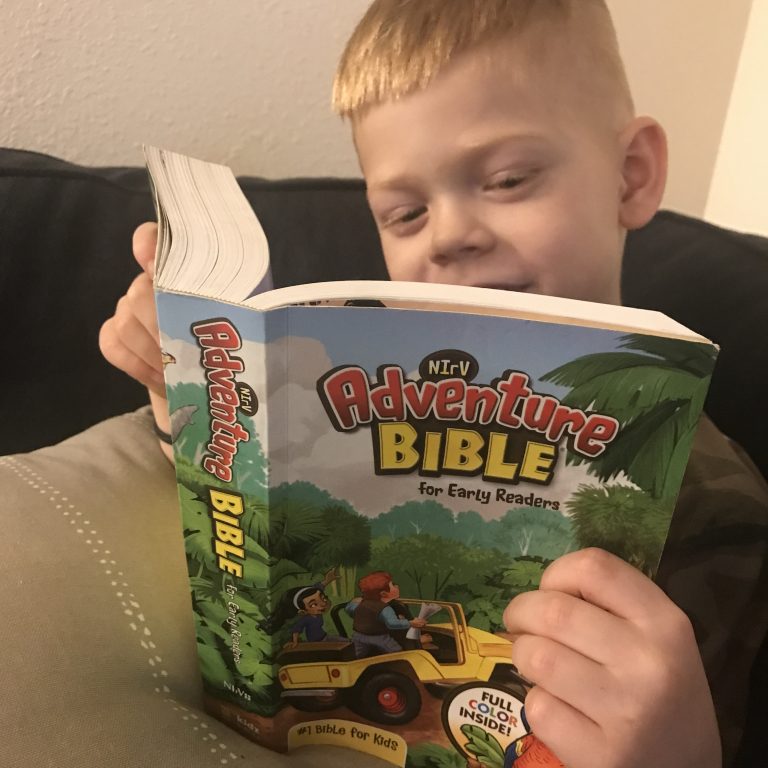 We’ve had different NIrV Bibles in our home before. I first learned of this version about 10 years ago, when my teens were young. We had a copy of this version for them to read on their own back then, and they quite literally wore it out. Since they’ve grown up, they have “real” Bibles now, but the younger kids are now getting to where they can read. This new dynamic is what prompted me to ask to review the NIrV Adventure Bible.

NIrV stands for New International Reader’s Version, and like its name implies, it’s a paraphrase of the NIV (New International Version) of the Bible. In this “reader’s version,” the words and sentences have been simplified down to a third-grade reading level, making it super easy for kids to understand. I’ve been using this Bible to read aloud bits of the Old and New Testaments to Dragonfly (6 years old). He was super excited to get his own Bible, and has been asking nearly daily for some reading time.

I really like the NIrV for reading to younger kids. The shorter words and phrases really help it to make sense for young minds. All of the meaning is there, but by using periods instead of commas in places, it it easier for kids to wrap their minds around what is being said. For example, in the NIrV, John 3:16 says

God so loved the world that he gave his one and only Son. Anyone who believes in him will not die but will have eternal life.

Compare this to the regular NIV:

For God so loved the world that he gave his one and only Son, that whoever believes in him shall not perish but have eternal life.

See how it’s almost the same, but just a little shorter? And the version for young kids has gotten rid of a couple of the words, and simplified “whoever” to just “who,” making it a lot easier for our littlest guys to get the gist of what’s being said without losing any of the important meaning.

I asked Dragonfly what his favorite part of the Adventure Bible was, and he told me that he really likes the pictures. There are lots of full-page illustrations as well as smaller ones sprinkled into the text showing a variety of different things (Life in Bible Times, Words to Treasure [memory verses], People in Bible Times, etc).

Overall, I’m really happy we were able to be on this review. My son is getting stronger at reading every day, and I’m glad he’ll have a Bible to read that he can easily understand moving forward.

Make sure to read more reviews from my colleagues on the Homeschool Review Crew as well.