Reading should be fun. If it’s not, kids will rebel against the process of learning it (ask me how I know…). So I’m always on the lookout for products that help in that goal, and as such I was really excited about getting to review The Reading Game, 2nd Edition from Allsaid and Duun, LLC. 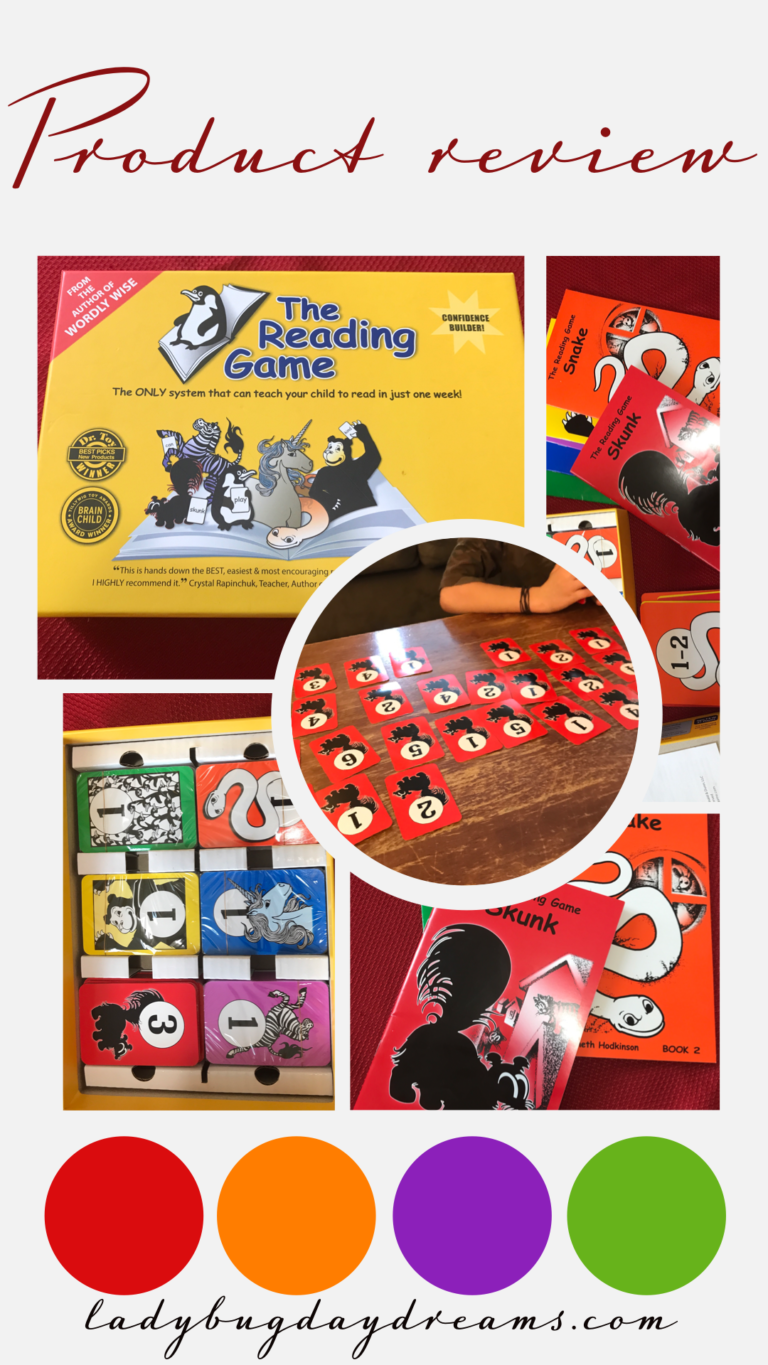 I have two kids who are on the spectrum of “learning to read.” My 8-year-old, Grasshopper, is one who’s rebelled against reading. (He’s just like his oldest brother in that regard.) My 5-year-old, Dragonfly, is super excited about learning to read – in fact, he had mastered some simple words when he was still 4. (He takes after his second oldest brother.) So something that would make the idea of reading fun for both of them seemed like a win in my book.

Contents of The Reading Game:

The Reading Game is very similar to the age-old game of Memory, but with a twist. It comes with 6 decks of cards, each assigned a color and an animal. Each deck of cards has six sets of 5 pairs of words, and they are numbered on the backs. So for example, your kids start with the Skunk deck, which has sixty cards. 10 of these have a 1, 10 have a 2, and so on. Because there are 10 cards of each number, that’s 5 words with which to play Memory. You start with level 1 of the Skunk deck. You can have basically an unlimited number of kids (within reason, of course), but you do need one person who is a strong reader already (parent, teacher, etc). Just like in regular Memory, kids choose 2 cards. They need to read each word on the cards. If the words match, the child keeps the cards. If not, they put them back and the next child takes a turn. When the teacher feels like the students have mastered the words in the 1 series, they add in the 2s, then the 3s, 4s, 5s, and 6s. 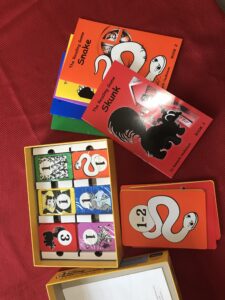 As they move through and master the words, there are flashcards for each deck (3 per deck – 1s and 2s; 3s and 4s; and 5s and 6s). These flashcards create sentences from the words they’ve worked on in those sets – only those words. And when all six sets from an animal group are mastered, the child is ready to read the matching book, and then move on to the next animal to repeat the process with new words.

Grasshopper, Dragonfly, and I played the game a few times a week. I started them both at Skunk 1, and we gradually moved up as the boys mastered the words. Grasshopper (8) was able to move more quickly than Dragonfly, but they both made incredible progress as we played. As we continued to add word cards, the kids quickly realized that they had better luck if they chose their cards with the same numbers on the back. (This was obvious to me, but they were very pleased when they “discovered” it themselves.)

When it was time to read the book because they’d done so well with the card game portion, the boys were a bit intimidated (especially Dragonfly – he’s done lots of reading of individual words but not much in the way of full stories). But when they could do it, they were so excited! And I was so proud of them too.

We will absolutely keep using The Reading Game. It is a wonderful resource for teaching kids to read – or for encouraging struggling (or rebelling) readers if that’s what your family needs.

Make sure to read more reviews on the Homeschool Review Crew. Also on the Crew blog, there’s a giveaway for The Reading Game. Five lucky winners will each win a copy, so please head over there and enter today! (Open to US addresses, ages 18+ only. Giveaway runs March 8-15, 2021. Void where prohibited.)