For the past few weeks, my boys (the older two) have been learning to type using The Typing Coach Online Typing Course. This program works in a very methodical way, teaching students to type just a few letters at a time. The Typing Coach teaches the home row first, then the top row, and finally the bottom row and numbers. Each row is taught independently before being combined, and the course emphasizes absolute mastery before moving on. 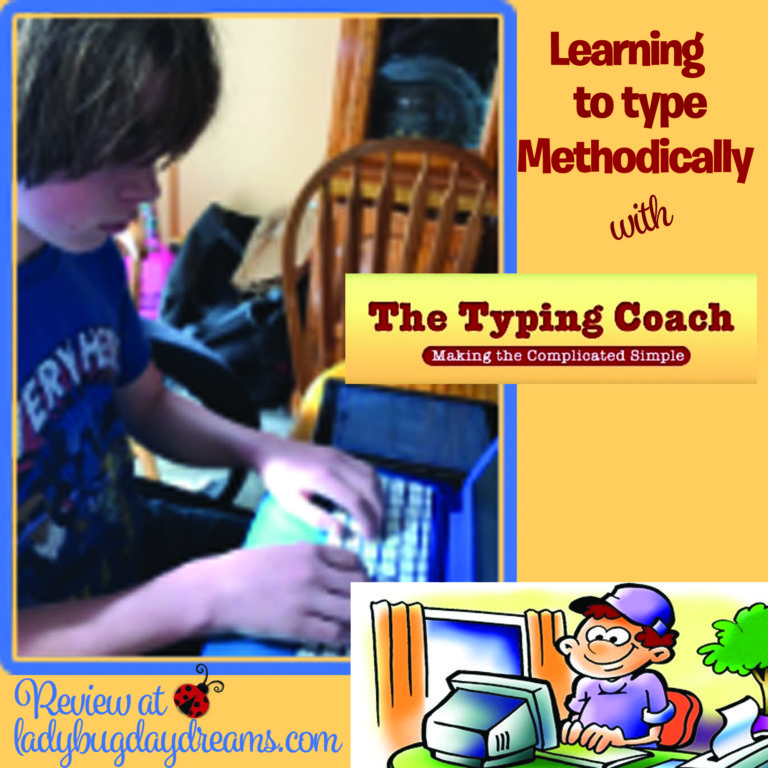 The Typing Coach is very easily adaptable to individual students because it’s “work at your own pace.” The goal is one lesson per week, but it’s definitely not set in stone; we had to move slower in order for the boys to get the mastery that the course requires in order to move on.

There are a few things you need to do the course. One is a reliable internet connection to listen to the audio portions and download the typing practice sheets. The other is a computer with a word processor (I hope that’s obvious, but just in case…). The goal is that by the end of the course, students will be able to type a minimum of 10 words per minute with no more than one mistake per minute.

Once you’ve downloaded the practice sheets, you need to either print it out or have it available some other way for students to look at while they’re typing. (Having it in a different portion on the same screen isn’t ideal.) Our printer is currently out of ink, so I put the document on my iPad and the boys used iBooks to read it and type. Then, log in to your account and find the lesson you need. The very first one is all about posture; then you move on to actually typing. For each lesson, there’s an audio to listen to. The audio works in tandem (and sometimes separately) with the downloaded document. There are a lot of different components to the audio lessons:

(There might be other parts that I’ve missed, but this is what I remember based on when the boys did these lessons.)

The student can practice, using the downloaded practice sheet, as many days as is needed to master the assigned keys. When they feel confident, there’s a slightly different website to go to to take a test. On the testing website, students enter their name and a parent’s email address (or your own, if you’re taking the course as an adult). They enter the amount of time allowed for the test and choose the test they’re taking from a drop down menu. After you click “start,” a new screen opens up with a box in it. The time starts when the first key is typed in the box. At the end of the time, a report is automatically sent to the email address specified before the test began. If the student passed (no more than one mistake per minute), then they can move on to the next lesson. If they don’t, they should practice for another day or two and then try again.

The two older boys used the program pretty much as I described in the previous section. The boys would use my laptop (with the “print outs” on the iPad next to them) and follow the audio for the lesson they were on. After a few days of working on the lesson, they attempted the test. If they passed, they could move on. If not, they went back to the practice sheets for a few days before trying again. To date, they’re both still working on the home row, but we went through a bit of time right after we moved where we didn’t have reliable internet access, so we were unable to start the program as soon as I wanted. Additionally, the emphasis on mastery is such that just one week on a lesson hasn’t been enough for them. Now that things are settled down (mostly), they’re doing a lesson or having a 20-minute practice each school day. After two or three days of doing the lesson with the audio, they decided that they prefer to do the audio in the beginning, but just type when they’re gearing up for the test. Just yesterday, they both attempted a test and got 2 mistakes over 1 minute. While not terrible, this is too many for The Typing Coach, so they’ll spend today and tomorrow practicing before attempting the test again to (hopefully) be able to move on to the top row.

Our Thoughts on the Program

My boys love this! Even though they’re not making progress very fast, they are by no means getting discouraged. Every time he finishes a lesson or practice session, Munchkin tells me, “I love typing!” Seahawk hasn’t said anything quite so exuberant, but I can tell that he’s enjoying it as well. Just in a 13-year-old, too cool for school kind of way.

The Typing Coach Online Typing Course retails for $17 per year per student. If this fits into your homeschool budget, I highly recommend giving it a try. If your student is really motivated, they should be touch-typing by the end of the first quarter.