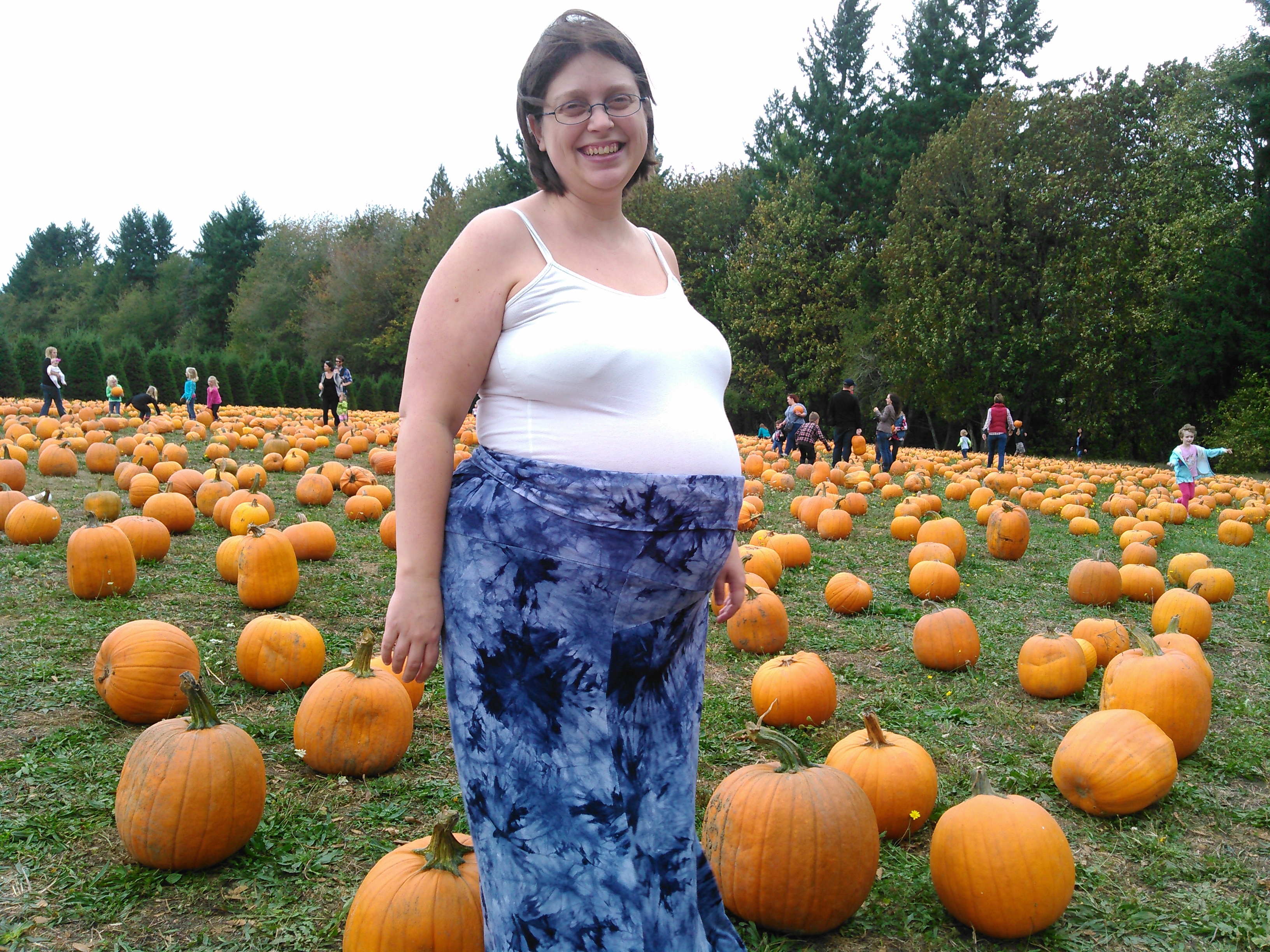 I touched on this before, but today I want to express my specific reasons for why I’m choosing to have Dragonfly via repeat c-section (RCS) as opposed to attempting a TOLAC (trial of labor after cesarean) and VBAC (vaginal birth after cesarean). There are pros and cons to both an RCS and a VBAC, and I thought at length over which option was best for me. This does not, under any circumstances, mean that my choice is the best for everyone. It also does not mean that anyone else’s choice is the right one for me. I just wanted to get some of my thoughts out on why I made what I know to be the right choice for myself.

For the full story of my choice, I think I need to take you back to 2006, when Munchkin was born. I’m not going to go into the whole story of his birth, but I’ll go over the highlights. Due to a failed NST (non-stress test) at my 38-week appointment, I was induced 11 days early with him. Eight hours into the induction, his heart rate dropped to about 30 beats per minute (normal adult resting heart rate is about 80 bpm; newborns are around 130 bpm, just to give you a point of reference). My family practice doctor, who delivered Seahawk and would’ve delivered Munchkin in a vaginal birth, made a call to the obstetrician for an emergency c-section. I don’t know how far away the surgeon was, but from the time Munchkin’s heart monitor beeped until delivery was only about 15 minutes. This included the time spent waiting for the surgeon to arrive, upping my anesthesia (I was already on an epidural), and wheeling me to the operating room. Once in the OR, I think it was closer to 5 minutes before he was born. I was disappointed in the outcome (I never in a million years thought I’d have a c-section, even when the doctor prepped me for the possibility about four hours before it became necessary), but obviously was glad to have my baby in the safest way possible for him.

In 2012, I was pregnant with Small Fry. At my first prenatal appointment, my doctor (the same one that I’d had for the other two boys) talked to me about the possibilities of a VBAC vs an RCS. She told me that the local hospital didn’t offer VBACs because they just didn’t have the staff that the ACOG (American College of Gynecologists) recommends. Because we live in a small-to-medium sized town (about 25,000 residents), they don’t keep an anesthesiologist, obstetrician, or pediatrician within the walls of the hospital 24/7, which is the main requirement of VBAC patients – just in case something happens and they need an emergency c-section. So my options were to deliver at another hospital or have another c-section. At that point, I hadn’t done a lick of research on the differences or pros/cons of each type of delivery. I just remembered that my recovery with Munchkin wasn’t so bad, so I readily agreed to a repeat c-section. I went through all of my prenatal appointments, had an appointment with the obstetrician who would be performing the surgery (the same doctor who had delivered Munchkin almost six years earlier), and was assigned a birthday for our newest family member. The biggest complication with the actual delivery was getting my dehydrated veins (thanks to the “no food or drink 8 hours prior to surgery” rule) to open up enough to insert the IV Hep Lock. (They ended up using a child-size needle.) The actual surgery went very well, and Small Fry was born exactly 15 minutes after my scheduled appointment time.

Recovery, on the other hand, was a bear this time around. I was coughing a lot, and my head felt like a train was passing through it for several hours after each dose of pain medication (2 percocet tablets). I talked to my nurses about the head discomfort, and they told me that it was a side effect of the pain meds; after dropping me back to one tablet instead of two, I felt much better. But there was still that incessant cough. My doctor (again, the same one as had delivered – helped in Munchkin’s case – the first two boys) came to visit me each day, and when I mentioned the cough to her, she listened to my chest and diagnosed bronchitis. I was started on antibiotics before leaving the hospital, and within just a few days was feeling better. Unfortunately, that diagnosis took until the third or fourth day in the hospital (I was there from Thursday through Sunday), which meant that I was recovering from major abdominal surgery with bronchitis for about 9-10 days (the four days before plus the five days of antibiotics). Not fun, and I told myself that if we had another baby I did not want another c-section.

Ah, the things we tell ourselves.

Now it’s 2015, and Dragonfly is expected to make his appearance in about 4 weeks (30 days, to be exact). I tried to keep my promise to myself: No more c-sections. I tried so hard. I spent the first half of my pregnancy on the phone with my insurance company and a variety of doctors/clinics/hospitals trying to find someone who would take a patient with two prior c-sections and was covered by my insurance. I didn’t expect it to be as difficult as it was. My doctor (this time, I’m seeing my regular doctor’s business partner because my other doctor was on leave until I was 22 weeks along; it seemed weird to me to change for “no good reason” at that point) found me the name of a clinic that would likely take me – at the very least, they’d give me a consultation to see if I was a good candidate. She said the only thing I had to do was to call them to make the switch to seeing them as my prenatal doctors by the 28-week mark. I called them around 21 weeks, just to get the ball rolling (my doctor said that changing before 28 was fine, but not after). Within about two minutes, I was told that they didn’t accept my insurance. I felt utterly defeated.

A week later, not ready to be deterred yet, I called my insurance company to get a list of doctors they were contracted with. The lady on the other end of the phone wasn’t sure if any of them did VBACs, but at least it was a place to start. I found one that I was sure I’d be comfortable with (based on internet research of each doctor on the list). Their website said the first thing to do, before calling them, was to make sure that the hospital they worked with/out of was covered by your insurance. So I put in a call to the hospital. The lady I was supposed to talk to wasn’t in at the time I made my call, so I left a message.

I waited several days before moving on, hoping she’d call me back, but she never did.

This was all happening around the same time as my anatomy scan at the beginning of July. (For those who don’t know, the anatomy scan is an ultrasound done between 18 and 22 weeks gestation. The point is to get a good look at baby’s body, inside and out, and making sure that all major organs are developing on schedule. Oftentimes, this is also when expectant parents find out the gender of their little one.) At my anatomy scan, besides telling me that baby was developing perfectly – and that we were expecting our fourth son – my doctor diagnosed a low-lying placenta. This can be a problem, because if the placenta is too close to the cervix (the opening of the birth canal, where baby moves through during birth), then a vaginal birth is impossible regardless of your previous childbearing history.

So in spite of the fact that my doctor thought I was a good candidate for VBAC (having had one previous vaginal birth and the “right kind” of incision and stitching for both of my previous c-sections), I was beginning to think that maybe this wasn’t going to work out so well after all. I spent half a week thinking over everything I knew, doing lots of research about exactly what a “low lying placenta” meant, and going over my previous surgical records again and again (I’d requested them from the hospital several weeks earlier when I thought a VBAC was in my future). After that half week of meditation – and still never hearing back from the VBAC friendly hospital – I made the decision that another c-section was the right answer for me.

After all that backstory, here are the specifics as to why I made that decision.

As I stated before, I know this decision isn’t the right one for everyone, but it definitely is for me. I will never judge a woman for their choices in childbirth method, especially after the heavy heart I went through making my decision this time. It’s the most I’ve ever thought about my choice before, and I now know from experience how personal (and maybe painful) the choice can be.