I’m starting a new series using my primary interest as inspiration: yarn. I’ll be offering my thoughts on various yarn that I use, both good and bad. Each one will include project(s) that I’ve made as well as my thoughts on the yarn itself.

For my birthday in July, my father-in-law got me some yarn (perfect gift!). The first thing I did was look at the label because it wasn’t yarn I’d ever seen before and I loved the feel of it from the very beginning. It’s from Yarn Bee (Hobby Lobby’s brand), and the line is called 44th Street. 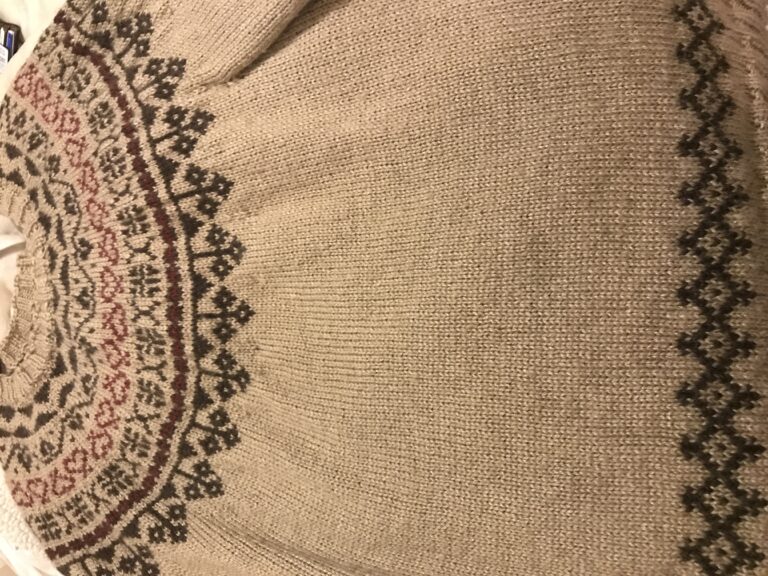 Let’s start by looking at the label. It’s listed as a 3 weight yarn (or DK), and there are 540 yards and 100 grams (3.5 oz) per ball. It’s sold in cake format (a cylinder shape), which is my very favorite. The fiber is 70% acrylic and 30% polyamide. A quick Google search tells me that polyamide is basically a type of nylon. The yarn is available in 10 colors and costs $4.29 (US) when it’s regular price. Of course, being Hobby Lobby, it goes on sale frequently. When I needed more to finish my project (more on why in a minute), I was able to pick it up for $3 apiece. 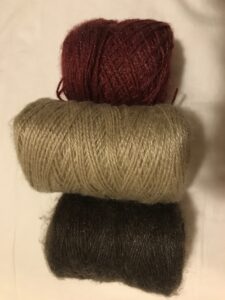 Because yarn cakes are flat on the top and bottom, they sit easily on the floor beside you while you knit or crochet, with little bouncing around.  As far as artificial fibers go, acrylic-nylon blends are some of the softest yarns you can buy in my opinion.

When I first pulled the yarn out of the gift bag, I was super excited. It was in the middle of a party (I threw a surprise party for my husband’s 40th birthday, and because our birthdays are only two days apart, my FIL brought gifts for both of us), and I was basically useless after that! I don’t go to Hobby Lobby very often (it’s only in the last couple of years that they started opening stores out west where I live), so I’d never tried any of their yarns. I’d heard a lot about them, but never tried one. And when I pulled the 44th Street out of the bag, I was immediately in love. I couldn’t wait to knit a sweater for myself using the yarn… which brings me to the next part of my review: How does it work up?

The first thing I noticed when I actually started pulling yarn up from the cake to start knitting (the day after the party) was that it was very thin, even for a 3 weight yarn. It felt more like a 2 weight yarn to me. I was willing to admit that maybe I was wrong because I rarely use anything but standard worsted weight yarn, but I have used other DK yarns in the past, and this felt a lot thinner than those to me. I started knitting anyway, but just with a test swatch. I know what my gauge is when working with worsted (4 weight) yarn, but not so much with the DK. So it was really important to know that whatever I made was going to fit – it’s no fun to spend a month making a sweater and then not be able to wear it in the end. I knew that I wanted to make a sweater for myself with this yarn, so I chose the Strange Brew pattern (the same one I used to make my kids’ sweaters earlier this summer). I opted to work bottom-up, which meant that I could start knitting a sleeve straightaway and not bother with a standalone swatch. Once I got a few inches up, I could stop to measure; if it was the right gauge then I was good to keep going and I’d already started the project. If not, it wasn’t so much knitting that I’d wasted loads of time – and yarn.

Turns out, my gauge was much too tight for the sweater project, even using knitting needles much larger than what was recommended both in the pattern and on the yarn label. Sad. So I decided to make a series of shawlettes with my yarn instead. There were several patterns on Ravelry, and I had enough yarn to make four of them. But that’s not what I wanted to make, so I was unhappy with the project even though there was absolutely nothing wrong with what I was making. I looked at other people’s opinions of this yarn (the consensus is that it’s too thin to be classified as a 3 weight) and how they overcame the “problem.” The answer was to hold two strands together and knit as if they were just one. So ripped out the shawlette and tried this method. It’s one I’ve used before, but only to make a marled effect with the yarn, not simply for making it thicker. I started a new sleeve, this time with two strands together. I measured it when I’d gotten up a few inches, and to my excitement, the gauge was right! I was off to the races with my sweater. 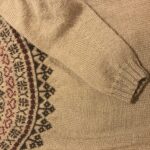 Because I had to knit with two strands together, I went through twice as much yarn as I would have otherwise. This meant that I needed to go back to Hobby Lobby and pick up more yarn to go with what I already had, but because they were having a 30% off sale, I was able to get all of the supplemental yarn needed for $15 (and I have quite a bit left over).

The colors I used were camel (for the main body), shale (the dark brown), and ruby (red).

Final thoughts? I really liked this yarn a whole lot. It’s a little disappointing that they label it a 3 when it’s clearly not. That distinction really matters when you’re trying to plan out a project. But knowing what I know now, I can work with the knowledge I’ve got. Some projects would be just fine with a single strand of this; others will use two strands together. Either way is A-okay with me.

Bottom line: Would I buy this yarn again? Definitely, especially when it’s on sale.