Words in green are direct quotes from my son

This post is rather bittersweet as it the very last review I will write for the Homeschool Review Crew. The Crew is shutting down after this year, and this represents the last review they will ever sponsor. Please enjoy.

Grasshopper, who is 10 now, was a late reader. For a long time, he just wasn’t interested. But once he put in the work and got good at it (around age 8), he’s been an avid reader. He was super excited to have the opportunity to read Quest for the King’s Crown from Focus on the Family. We received a paperback copy of the book.

Though this is the seventh book in the Last Chance Detectives series, it stands alone; students don’t have to have read the first six in order to understand the plot. 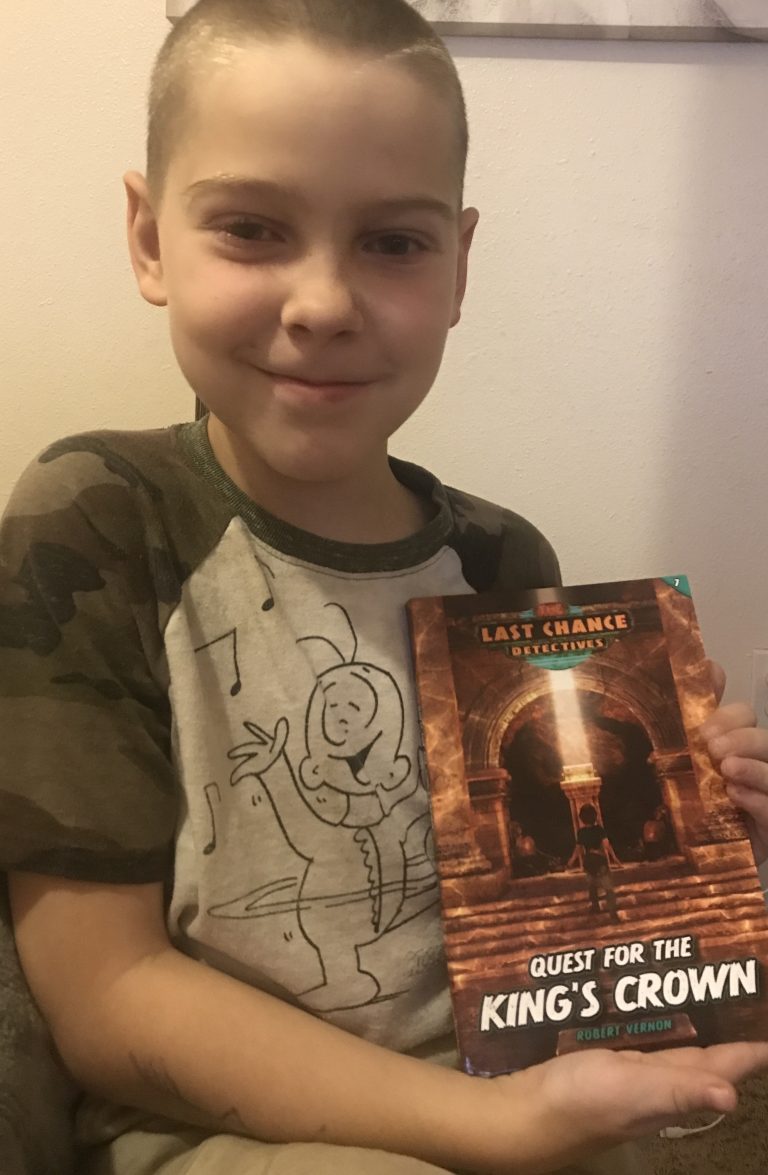 The Last Chance Detectives (Mike, Winnie, Ben, and Spence) meet in a diner and are talking about how nothing exciting ever happens to them. So they decide to go to the desert to investigate something. While there, they decide to go swimming at a pond and then Winnie says, “There are snakes in that pond. You better be careful.” Then Mike says he sees a snake. Instead, they find a skeleton in the waterfall. They call the police to come and investigate it. They find out the skeleton is over 400 years old! So they take it to a scientist who finds a piece of paper in its hand. They decide they should take it out because they don’t want to put the skeleton into a freezer and the museum people can’t get there for a week. I haven’t read what the paper says yet, but I think it’s going to tell them about some sort of treasure!

I think this book is definitely worth having gotten for this review. I really enjoy reading it. The chapters aren’t too long; I can read one in about ten minutes. I’d say the words are about medium difficulty, meaning that kids about 8 and up should be able to handle reading it on their own. Younger kids should be able to understand the story if a bigger person reads it to them. One of the things I liked most was that each new chapter starts on the right side page. It might seem silly, but I felt like I was making faster progress through the book by having some of those blank pages. I think if I could choose any of the books in this series, it would be this one. I think the story is really good and I’m always very excited to read the next chapter. Even though I think that I will like this one the best, I really want my parents to buy me the other books in the series!

As you can see, this book has been quite the hit in our home. Even though I sometimes have to remind him to read a chapter in the evening, once he gets started he usually will read two or three of them because he just can’t put the book down. And he was kidding when he said he wants the rest of the books; he’s asked me to buy them for him more than once as he’s been reading this one.

Make sure to click through to read more reviews from my fellow Homeschool Review Crew colleagues.