If you’d asked me a month ago whether or not I thought I’d have an interesting story to tell surrounding the birth of our fourth son, I would have said, “No.” Due to several reasons that I’ve discussed on the blog before, I had a scheduled repeat c-section. I figured it would be just like Small Fry’s birth: show up at the appointed time, get an IV, have a baby via surgery, go home four days later. Easy-peasy.

But sometimes babies have their own agendas. 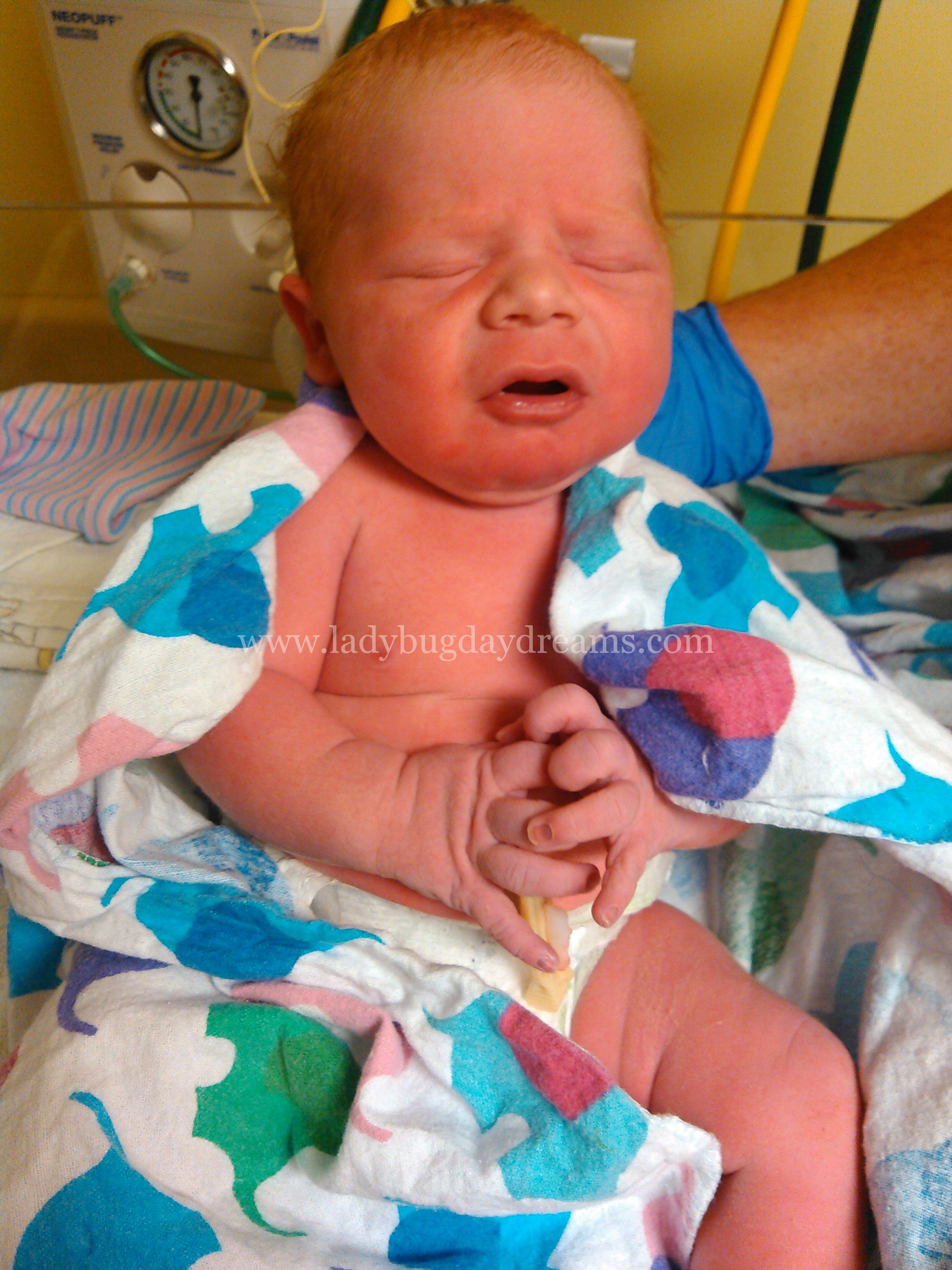 Yes, the birth was scheduled, both the date and time. And yes, he did arrive on the date scheduled. But the time? Nope. He had his own ideas for that.

I went to bed the night before feeling normal. Like labor wasn’t even going to be an issue. After all, I’d only ever gone into spontaneous labor once, and that was over 12 years ago with Seahawk. I wasn’t even sure I’d know what it felt like anymore if I did go into labor. But God knew that, so He made sure there was no mistaking it when it happened.

Wait, what? You went into labor with a scheduled c-section?

Yes. I woke up at 6:55, about 35 minutes before the alarm was scheduled to ring, with what felt like a tiny little drip flowing over me. I didn’t think too much of it and tried to go back to sleep. But I just couldn’t shake the feeling that that drip was significant. I couldn’t ignore it. So I got up to use the restroom, hoping not to see any blood when I was in there. Fortunately, there wasn’t any. There was, however, a big gush – just like in the movies – as soon as I stepped foot in the bathroom. Yes, my water had broken. There was no mistaking it, despite the fact that this had never happened to me before. How that gush “waited” until I was in the bathroom instead of the bedroom, I don’t know. But I’m glad it did. I’m even more glad that it didn’t gush in the bed.

Now that I knew that my water had broken, I immediately woke Will up, despite the fact that he would’ve been up within 30 minutes anyway. We (well, he) woke the kids up with a sense of urgency, and within half an hour, we’d gotten everyone ready (including packing the overnight bags) and were en route to my mom’s house since the boys were going to spend some time with her while I was in the hospital and Will was going back and forth between staying with me and doing book signings. (Seahawk is technically old enough to babysit, but we don’t like leaving him for more than an hour or two until we can get him into a safe babysitting course.) Once we dropped the boys off, we headed straight for the hospital. We arrived there less than an hour after my water had broken, and a full hour before our scheduled check-in time.

Once I was admitted, they paged my doctor and she came to check on me. She did a vaginal check for dilation, and confirmed that my water had indeed broken. I was at 2 centimeters, but contractions were coming fast and hard, so they called my surgeon to see if she wanted to move the surgery up. Upon hearing that I was in labor, she did want to get baby out as soon as possible. Because none of us knew what my internal scar tissue looked like, we didn’t really want me to labor too much to avoid the risk of uterine abruption. There was a chance that my scar tissue had healed beautifully and wouldn’t cause too much trouble. There was just as good a chance that the tissue would be stretched thin from pregnancy and on the verge of splitting on its own without even taking labor into account. So within about an hour and half of arriving at the hospital, I was in the operating room. The only reason it took even that long was because the rest of the staff forgot to notify anesthesia, who was expecting me at noon, not 9 a.m., so we had to wait for them to arrive. The anesthesia doctors arrived at around 9:35, and by 9:45 we’d begun.

Just like the last time I had a preplanned c-section, the anesthesia was the worst part. I always end up freaking out (internally only) while getting the spinal. The numbing shot just before the spinal hurts like a freak attack, but then it’s all smooth sailing from there. This time around, the doctor pushing all over my back to find the right spot was quite painful, too. Once the spinal was in, it worked very quickly. Within just a minute or two, I needed help getting my legs up onto the operating table so the real fun could begin. Once the spinal was in, they brought Will into the OR. It seemed to me that it took a long time for him to get there; part of me was worried that he wouldn’t make it. But he did, thankfully. The doctors and nurses got me all settled on the operating table, and then pulled up the blue curtain. Dr. S (my surgeon) did the anesthesia test to make sure I was fully numb, and then she got started right away. I couldn’t see the clock from my vantage point, but I think the first incision was probably made right around 10 a.m. Things were going very well. My anesthesiologist was excellent at staying by my side and keeping me informed as to what was going on and being a calming presence. Will was on my other side doing the same. 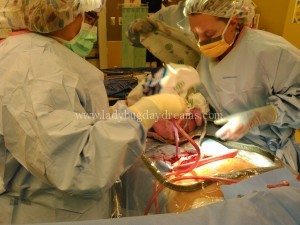 Dragonfly made his appearance at 10:19 a.m., an hour and 41 minutes before the surgery was originally scheduled to start. He cried immediately, which always makes me cry (happy tears) too. After some of the crazy dreams I’d had while pregnant with him, hearing his first cry was the best sound in the world to me. My doctors pulled the blue curtain down enough to show me his little face, but not enough for me to see my open guts. He looked so small to me! After I got a good glimpse at him, they pulled the curtain back up and invited Will over to the other end of the table to cut the cord. I was glad they offered him this opportunity. When Small Fry was born, he wasn’t give that chance (nor with Munchkin, but that was an emergency situation and therefore understandable), and I remember him mentioning his disappointment later. Once the baby was cleaned up a bit and swaddled, Will was able to bring him over for me to see better. The two of them stayed there for the remainder of the surgery. I couldn’t hold baby during that time – they didn’t offer me the chance, but I probably would have declined anyway because I didn’t feel in that moment that I could have done so safely – but it was nice to be able to touch his face while Will was holding him.

Closing me back up took about half an hour; by 11 a.m., I was back in my room for recovery and bonding. Baby nursed right away; he’s definitely a natural at it. I was in the hospital until around 11 a.m. on Monday, and definitely ready to go home by then. It feels good to be getting back into the swing of things – even if I have to move a little slow still.