We are no stranger to the Heroes of History series from YWAM Publishing. I read two of them with my older kids when they were younger (C.S. Lewis and Jacob de Shazer), and now I’m reading a new (to us) one, Benjamin Franklin: Live Wire with Grasshopper (he and I also read Corie ten Boom last year). The biography reads like a novel, and that’s part of what makes the Heroes of History series so good. You’re getting great history without it feeling like a history lesson. 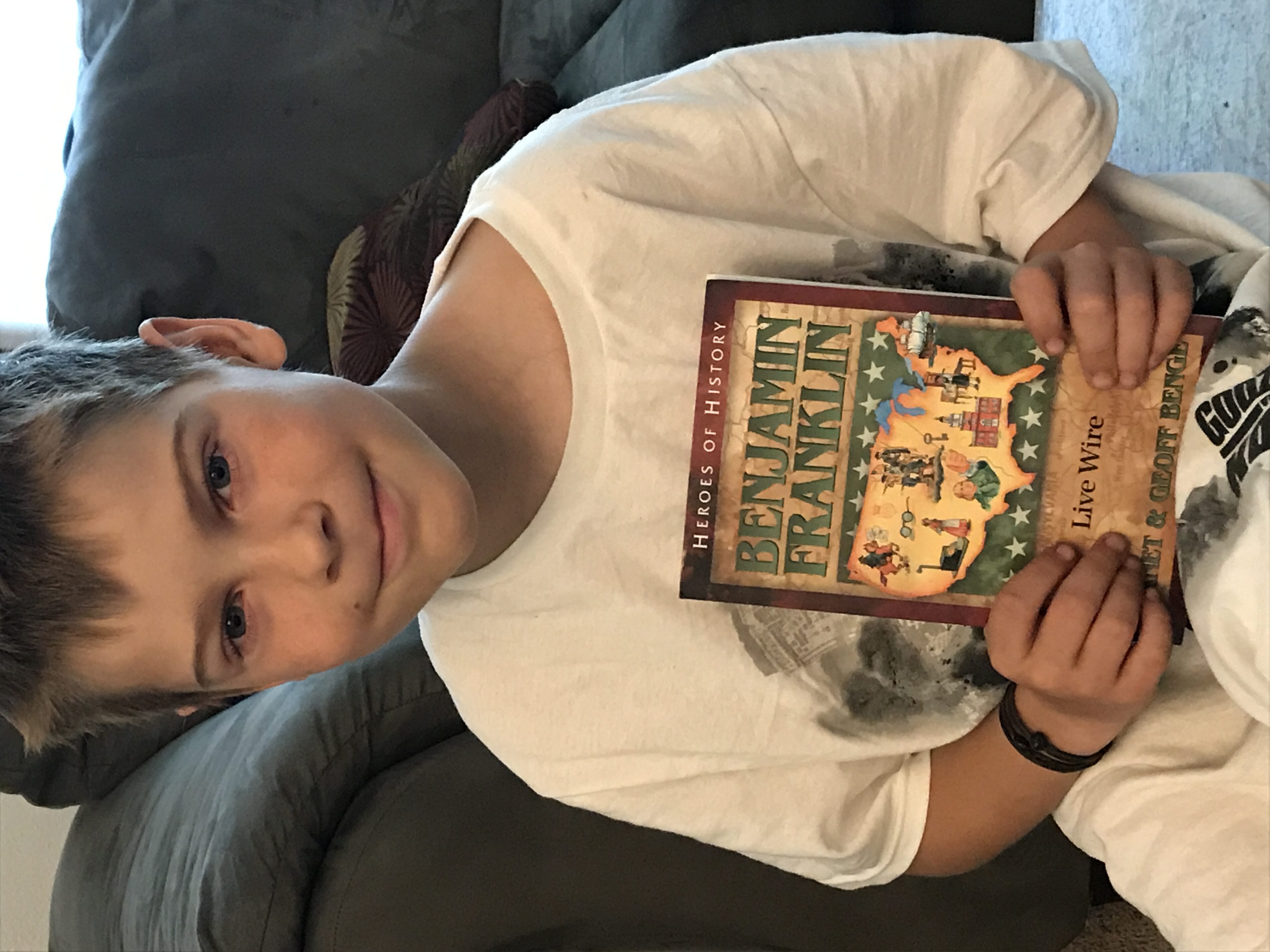 The book, like all of the YWAM biographies, starts with a “chapter one” that would be better named a “prologue,” not a “chapter.” In the case of Benjamin Franklin, we first meet him during the famous kite-flying experiment when he proved that lightning was a source of electricity. In chapter two, we are thrust backward in time to the time of Franklin’s youth and then move forward from there.

In the book, we learn all about Benjamin Franklin’s troubled relationship with his father, and how he didn’t want to work in “the family business” (soap- and candle-making). We take a trip across the Atlantic with young Ben as he travels to London on official business with the guarantee of the governor of Pennsylvania, William Keith, only to find out that the governor was a swindler when he got there – Keith didn’t send Franklin with the paperwork required to purchase the printing equipment he was sent for. This setback left Franklin in London for over a year, scrambling to get the printing press so he could bring it back to America.

A few chapters later, we learn all about Franklin’s civic “duties” – how he developed and created the very first fire station, library, and hospital in the colonies. In his position as one of Pennsylvania’s VIPs, he met many inventors who inspired him to explore science himself. Both Grasshopper and I found these chapters (the science ones) quite interesting. It was fascinating to read about how, before they fully understood electricity, the scientists would put on “magic shows” where they shot sparks out of their fingers (and other places) to impress the crowds. One time, Franklin himself was planning a show in which he used electricity to kill a turkey for the town festival (they planned to eat the turkey at the festival), but something went wrong and he ended up electrocuting himself instead! He nearly died that day.

Benjamin Franklin retired from his printing shop in his 40s, and from that point forward he focused a lot on his scientific pursuits, as well as continuing to be a “mover and shaker” in the Pennsylvania colony. He was made the postmaster general, which gave him quite a bit of power. He personally guaranteed the bonds that were used to pay for the French and Indian War (though he was able to recover those funds from the government). And he went back to England.

This is the point where Grasshopper and I are now (we have 4 chapters left in the book to read). Because we’ve been reading about 3 chapters a week, we’re not quite done, but we should finish it up by the middle of next week, if not before.

In addition to the book itself, YWAM offers complete study guides for all of their biographies. Benjamin Franklin: Live Wire is no exception.  The unit study guide follows the same outline of the other unit studies, having students explore key quotes from the topic. In the case of Benjamin Franklin, there are a few quotes from he himself, as well as some from other notable scientists (Sir Isaac Newton, Aristotle), politicians (FDR), and authors (Ralph Waldo Emerson). On their surface, the quotes don’t seem to apply to the book, but when you discuss them and dig deeper, you can see the relevance.

There’s a guide for helping students create a display (poster-style) using the information they learned in the book. There are lots of reading comprehension questions, split up by chapter. And then there are options for expanding the study to include subjects beyond reading/literature and history. Overall, the study guide is a very good way to turn a simple book into a much more intense learning experience, especially for older children.

I am the only one reviewing Benjamin Franklin this time, but there are lots of other YWAM biographies being talked about on the Homeschool Review Crew website this week. Click through to find out more!