Lori recommended this book, and it’s been a really fun read. I need to borrow it from the library again to read aloud to my boys (not that I don’t have enough of those!). 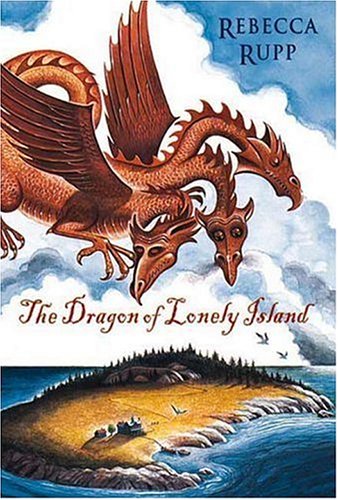 Three children, Hannah, Zachary, and Sarah Emily, find themselves on a small, lonely island for the summer while their mother writes a book. The family borrows a house from Mother’s aunt, Mehitabel. Aunt Mehitabel has left a skeleton key and confusing note for the children, and they spend the summer trying to make sense of it all. In their quest, they find themselves face to face with a three-headed dragon who teaches them all about the myths of dragons, as well as some history surrounding the creatures.

Lori suggested these questions from Sweet on Books.

How would you describe the siblings’ relationship?

They seem to get along okay – about as well as normal siblings, I’d say. They’re at a tricky stage, though, with Hannah (the oldest) being at a point where she’s starting to outgrow her siblings. Zachary and Sarah Emily seem to be really close, though.

Which sibling do you relate to the most and why?

I think I relate to Hannah the most because I don’t think I’m much fun (lol). I’m definitely the kind of person who wants the kids to do kid things and to be left on my own to do grown up things. Obviously I fight this in order to spend time with my children (whom I adore, and I don’t mean to suggest that it’s a chore to spend time with them – it’s not).

Do you think that inequalities for girls still exist today?

I think things are different for boys and girls. But different is not the same as unequal. Instead of working hard to be “equal” (which by definition means “the same as”) boys/men, girls and women should embrace who we are and appreciate our gender roles.

Do you believe in dragons? Would you like to meet one?

I believe dragons used to exist, but I don’t think they still do. I think they’re really just a variety of dinosaur, and from what I’ve read in the Bible, it seems to support this view. I don’t think they were ever “wise” or able to talk or anything, though. Would I like to meet one? Probably not. I’m not one for creepy things 😉

What would you do if you were stranded on an island? Name three things you don’t think you could live without.

I would be just fine relaxing in a cozy chair and knitting somewhere. The rest of my family would be all about the walking around and exploring. Three things that would be difficult to live without: my phone (some sort of communication with the outside world would be nice); yarn and knitting needles (can’t cozy up and knit without those!); and a pan to cook some good food in.

We haven’t decided yet on a book for next month; I’ll do a short follow up post once that decision’s been made.

Don’t forget to check out Lori’s thoughts on The Dragon of Lonely Island here.