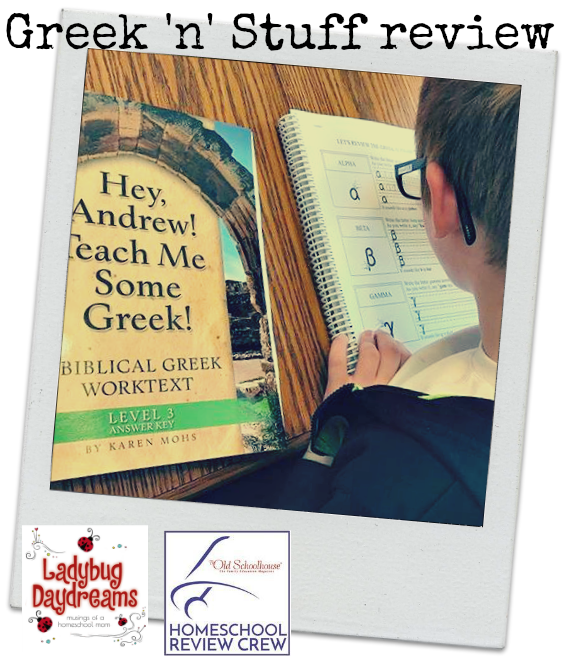 A couple of months ago, my two oldest kids created their own secret code using the “Ancient Greek” alphabet as their guide. They practiced and practiced their handwriting, assigned each Greek letter an English equivalent, and then started writing messages to each other. I thought this was both interesting and clever of them. Not long after that, we were given the opportunity to review “real” Greek from Greek ‘n’ Stuff, so I asked them if they’d be interested, and (not surprisingly) they said yes. 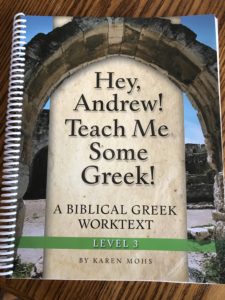 For this review, we were sent the Hey, Andrew! Teach Me Some Greek! – Level 3 Set student worktext and full answer key, as well as the pronunciation CD. Once we got started with it, it became very clear that Munchkin was much more interested than Seahawk, so after the first few lessons, he continued alone.

Even though this was our very first exposure to Greek (not counting the boys’ Google searches to find out what the letters looked like), after looking at the website, I learned that it was best to start at Level 3. This is where it’s suggested kids in upper-elementary and older begin, even with no previous experience. The first several lessons are all about the alphabet, which technically should be review for this level (and in fact, that’s how it’s treated). But it was easy enough to slow it down and make 6 lessons (plus tons of flashcard practice) instead of just two. Because we got Level 3, the flashcards that are included start with vocabulary, so I had to find some alphabet ones online. This wasn’t a big deal, though. 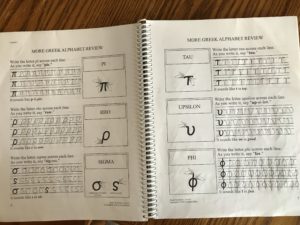 Once he’d mastered the alphabet, Munchkin moved on to the vocabulary lessons, which start out slow and steady. Greek ‘n’ Stuff uses a translation method, so at the beginning of each lesson, the Greek word is written big at the top of the page, along with a phonetic transcription and the meaning of the word in English. Then there are a few activities using the word (write the word in Greek, draw a picture of the word, match all the words you’ve learned so far with their English translations, and more). There are definitely enough different types of activities to keep the learning from getting dry or boring. Each day is a little different. 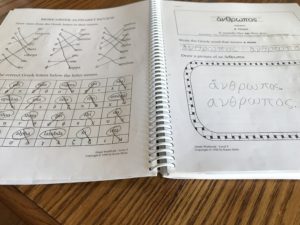 We had another advantage while working through this, too – the kids’ grandfather (Will’s dad) is fluent in Greek due to all his time going through pastoral training, so he was able to help out with the extra tricky pronunciations, and he offered up random pop quizzes occasionally. These usually looked like a Greek word written down, and Munchkin had to give the correct pronunciation and translation.

So far, Munchkin has really enjoyed his Greek lessons. They’re a nice change from our regular foreign language study (Rosetta Stone French), and because it was his idea to learn it, he does it mostly on his own without ever having to be asked. He has learned about a dozen words so far, and his Greek handwriting is quite good. I’m glad he’s taken the initiative to learn Greek; it will definitely come in handy as he gets older and becomes a man of God to be able to (eventually) read the Bible in its original language. 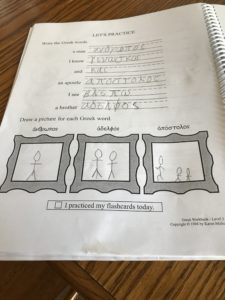 Make sure to click the banner below for more information on all of these products.