For the second month in a row, I seem to have chosen a book club question with no discussion questions available online. This time, it’s The Guardians by John Grisham, and I’m quite surprised to be unable to find some questions considering the novel was a mainstream release by a popular author. But what are you going to do? So let me just ramble a bit about this novel for this month’s edition of Book Club. 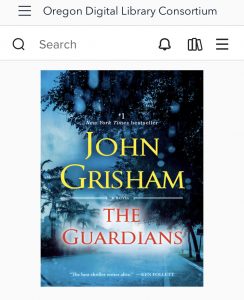 The Guardians is the story of Cullen Post and his ragtag law firm (some of Grisham’s favorites), who spend their time taking on the unwinnable cases. The cases in question: men and women in prison for the crimes of other people – the innocents. Cullen (or as he’s more commonly called, Post) is the main lawyer in the firm, though his colleague actually founded it, is a former minister who regularly relies on those good graces in his cases. His firm, Guardian Ministries, has successfully exonerated 8 former inmates (one of whom now works for them). The novel focuses on their ninth and tenth cases.

Quincy Miller is a black man convicted of murdering a white lawyer in a small Florida town called Seabrook. His supposed crime and trial were committed nearly a quarter century before the events of the book. After spending 22 years in prison for a crime he didn’t commit, his case is picked up by Post and Guardians. The search for the lawyer’s real killer and proof of Quincy’s innocence takes Post on a wild chase all across the South and even as far away as Idaho and the Caribbean.

It’s no secret that I’m a big fan of John Grisham’s, but I’m going to be honest here… this wasn’t my favorite book. I didn’t hate it, and I liked it better than some of his non-legal-thrillers (I’m thinking specifically of A Painted House). But I found it a bit sloppy. Allow me to explain.

The novel is written in first person, that of Cullen Post – mostly. There are a few chapters where it was necessary for the story to deviate from Post’s POV, so the novel reverted to a third person narrative occasionally. I’ve written first person novels before, so I know from experience that it can be frustrating and problematic when you want to tell part of the story that isn’t directly related to your narrator. But you shouldn’t do that. A tighter story will find a way to get that expository into the book through the “proper” point of view rather than just ignoring the world you created – specifically that which is seen through the eyes of your main character.

Also, I found a lot of the conspiracy behind Quincy’s conviction a bit far fetched for my taste. I can get behind “the mob did it and framed this guy,” but some of the side stories related to that main plot point were just too much. For example, I’m not entirely sure how it mattered to the case that Quincy’s original lawyer was kidnapped and forced to literally watch two other men get eaten alive by alligators and then threatened to be shoved into the swamp himself. Especially since after spending a reasonable amount of time following this lawyer and his story, Post is told by him to “never contact me again.” So Grisham ignores him for the rest of the novel, too.

The concept behind the story is good, but like I said, it wasn’t my favorite Grisham novel. If you want a story that’s about the “good guys” fighting for someone who really deserves it, I recommend The Street Lawyer instead.