One of my favorite books is The Host by Stephenie Meyer. The first time I read it, many years ago, it took me a long time. The first 70 pages or so just didn’t make any sense at all. The character names were weird (Fords Deep Waters, for example), and I really struggled with it. Add to the strange character names the fact that the main character is actually two characters (I’ll explain that in a minute, when I get to the plot summary), and I just couldn’t follow it at all.

But then I got past that 70th page, and things started to fall into place for me. From that point on, I devoured the book. And now it’s one of my favorites. I recently reread it after having not in a few years, so I’m going to discuss it today for Book Club. 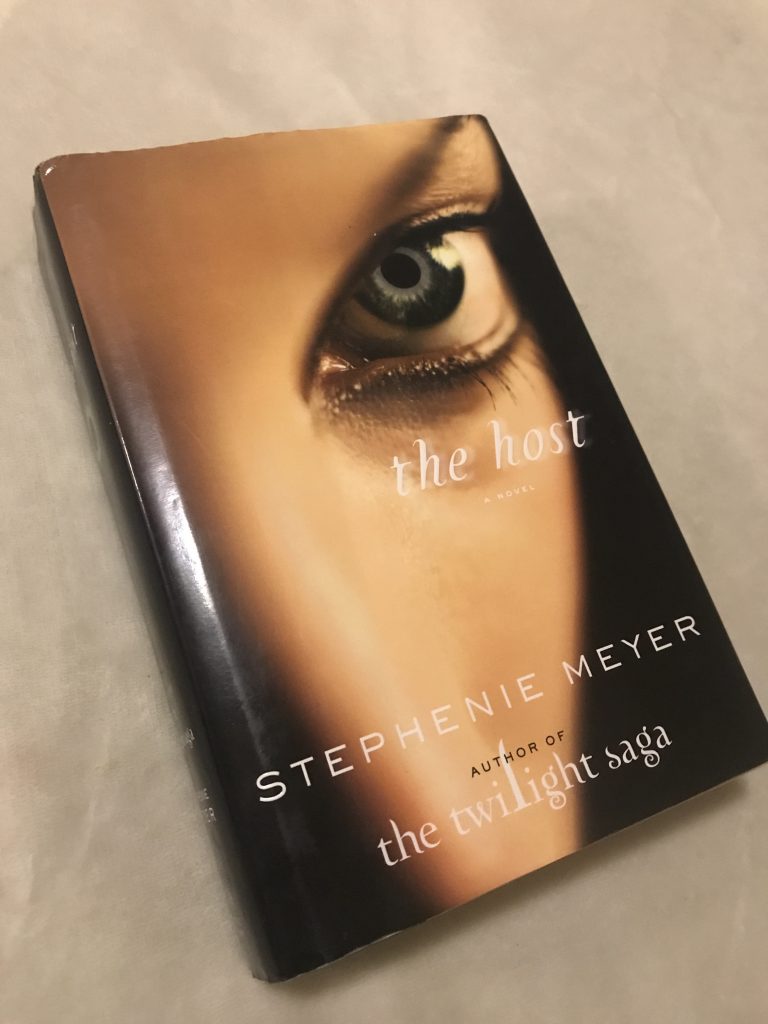 The world has been taken over by “souls,” creatures from space that can’t live on their own. They travel to various planets, inserting themselves into the bodies of the creatures who already live on those planets – the hosts. Now, they’ve come to Earth. Most of the humans have been taken over by these souls, and very few have “survived.” Their bodies are alive, yes, but their minds are completely gone. Only the memories of the soul remain. But there are a few who fight back. Melanie Stryder is one such fighter.

The soul assigned to Melanie is called Wanderer. She’s tasked with not only becoming Melanie, but with digging into her memories and finding out where the pocket of resistors (Melanie’s family) are hiding. When Wanderer finds them, will she report them to the “proper” authorities? Or will she develop relationships with the humans that have successfully resisted?

As I mentioned before, I love this book. It was Stephenie Meyer’s first foray into adult fiction, and I think it was a resounding success. A lot of people don’t like it (likely because of those first 70 confusing pages), but I think it deserves more love than it gets. I like how the two-characters-in-one-body start off so volatile toward one another but slowly develop a friendship. I enjoyed watching the relationships develop between Wanda (as the humans shorten Wanderer’s name to) and Jared (Melanie’s boyfriend) and Ian (a human in the cave who takes an interest in Wanda). It was fascinating to “see” how the other characters slowly come around to Wanda. Reading about the other made-up planets Stephenie Meyer created for Wanda to have inhabited was so neat – I could see all of the details in my mind’s eye as I read. I also liked how she didn’t spare the characters – some of the humans died, some of the souls were killed, and one of the main characters nearly died. There was a lot of emotion poured into this book. As a reader, you go through everything with the characters – love, pain, joy, betrayal… it was really well written (the exact kind of book that makes me want to write another novel).

The Host was turned into a movie starring Saoirse Ronan and William Hurt in 2013. It captured a lot of the main plot points of the book, but lacked most of the character depth of the novel. The movie felt like it just sped through the storyline with very little reason to care about the characters. It wasn’t a bad film, but it certainly didn’t compare to the book. At all. If you’re interested in the story but don’t want to commit to reading a 650-page book, it’s a decent substitution. And if you like the film, then you should definitely pick up the book.

Have you ever read The Host? Seen the movie?