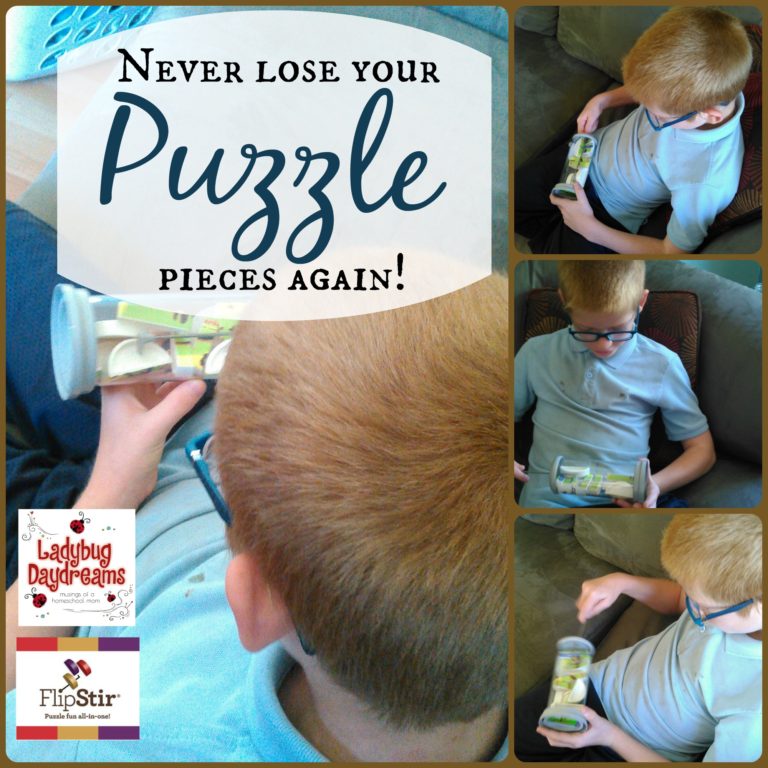 Kids love puzzles. But it’s no fun for anyone when you get nearly finished – the box is empty – and there’s a hole in the picture. This is where the FlipStir Puzzles from Enlivenze LLC are such an ingenious invention. Available in five different pictures spanning two difficulty levels, FlipStir Puzzles, put simply, self-contained, 3D puzzles. There is absolutely no way for the pieces to get lost. Allow me to explain more.

Each puzzle (we’ve been playing with the Tyrannosaurus Rex one) consists of a clear tube with ten pieces inside. There’s a wand with a handle on the outside and a foot on the inside, and the goal is to use the foot of the stick to manipulate the puzzle pieces into place. It’s a little difficult to imagine based on written words (I know I had a hard time understanding before we got it), so I’ll allow Seahawk to do it verbally for you.

See, much easier to understand now, isn’t it? (My apologies that the sound doesn’t quite line up with his mouth. I don’t really know why.)

When we first got this in the mail, I was on my way out of town on errands. I kept the puzzle with me (the boys were staying home) and tried it as soon as I was parked at the store. It was interesting to say the least. It took me about 10 minutes to solve, which was less than I expected, especially once I started. I found it tricky to move the pieces into position, but once I had a method it was a lot easier. As soon as I got home, I presented it to the big boys with no words of explanation. They were really confused as to what they were supposed to do, so I offered the very basic instructions on the company’s website: Flip, stir, solve. Seahawk managed it fairly easily once he knew what it was. Munchkin had several failed attempts. He was getting very frustrated, so I suggested he put it aside for the day. He tried again the next day, and though it took him about an hour, he succeeded. He was very proud of himself, and I was pleased with him for not giving up.

I mentioned before that there are two levels; T-Rex is a level 1 puzzle. The other level one puzzle is rainbow colored pencils. Level 2 puzzles include the Statue of Liberty, the Solar System, and the Periodic Table of Elements. The difference between level 1 and level 2 is that the harder puzzles have wavy edges rather than straight ones. I haven’t tried a level 2 puzzle, but I imagine those wavy edges make it more difficult to move the pieces around inside their casing. The flip side (pardon the pun) is that once you get them into place, I bet they don’t try to slide out of place so easily. That sliding away from where you left them is one of the biggest hurdles to cross with the straight-edged puzzle.

As a parent, I love several things about this puzzle. First, the pieces will never get lost. The puzzle is completely self-contained, and the lid doesn’t come off. Second, it’s a great brain exercise for the children, and one that doesn’t require screen time or batteries. Third, it’s not Legos (lol). It creates very little clutter in the house because it’s just one piece, not much bigger than a can of soda. The kids liked the challenge. They’ve worked on it multiple times since we got it; it doesn’t seem to have lost its luster at all. After several weeks of having it, that really says something!

Members of the Schoolhouse Review Crew are reviewing all the FlipStir puzzles (except the Periodic Table) this week. Make sure to hit the Crew blog for more information.