Last year, we learned that some stores in the local shopping mall offer trick-or-treating for kids. We decided to try it out and see how we liked it in comparison to “regular” trick-or-treating (which we’ve never done in the traditional house-to-house way with our kids). It worked out really great for us. It’s a great alternative, especially when it’s rainy (which it was last year, but not this year), and also if you’re in a situation that necessitates frequent rest breaks – there’s almost always somewhere to sit nearby when you’re at the mall. In addition to all of these perks, the amount of candy the kids get is reasonable but not outrageous, unlike regular trick-or-treating. The kids may not see this as a benefit, but as parents, we definitely do.

Because of all of those perks, we decided to take the kids to the mall again this year. Will had some work to get done in the morning (plus there’s that whole homeschooling thing…), so we went out after lunch. The kids each came up with ideas for their own costumes, and we put them together using things we already had around the house or could procure/make fairly inexpensively. In fact, I think the only costume we spent any money on was Seahawk’s, and it was only about $8, half of which he paid himself. 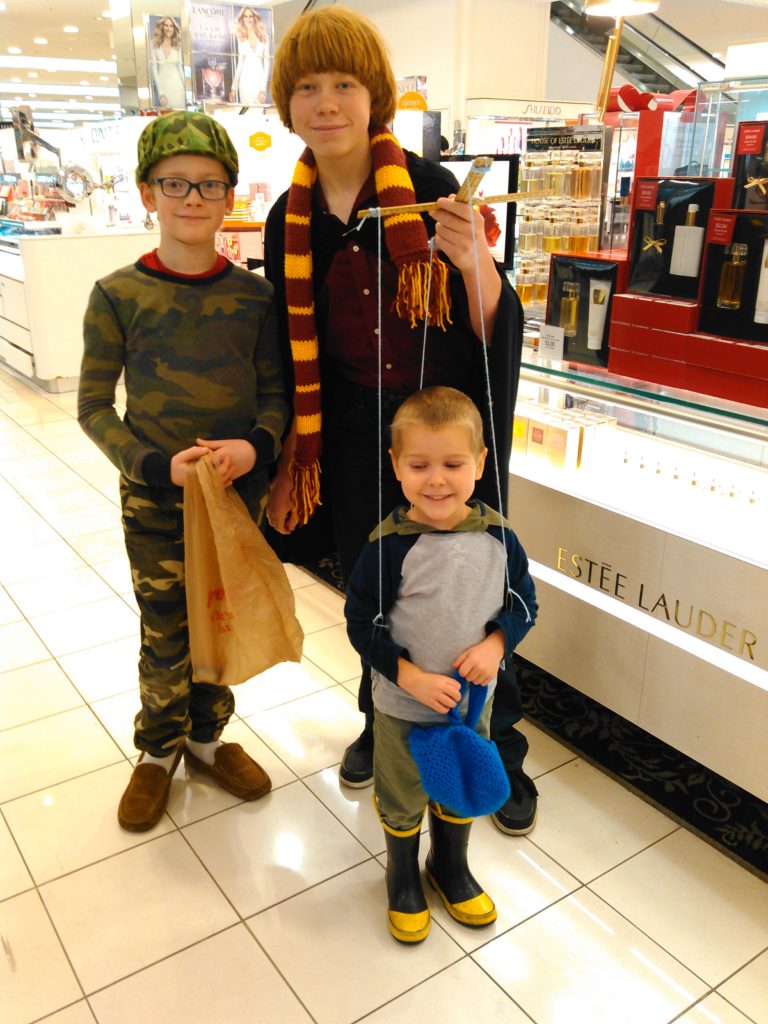 From youngest to oldest, the costumes were:

Dragonfly: We opted not to dress him up. He’s little enough that he didn’t understand what was going on anyway, and he certainly doesn’t need a bag of candy. So he went as “an old man pretending to be a baby.” 🙂

Small Fry: A couple of weeks before Halloween, he said, “I want to go as a puppet for Halloween.” This was a great idea for a few reasons. First, it was a very creative idea. You don’t often see puppets out trick or treating. Second, it was a free costume. He just wore his regular clothes with yarn safety-pinned to his sleeves and backside which was attached to a pair of rulers tied together in a cross above him. Seahawk and Will took turns being his puppetmaster.

Munchkin: He received some camouflage pants for his birthday, and already had a camo long john shirt and toy soldier’s helmet, so he went as a soldier. Easy peasy.

Seahawk: Ever since they went to Comic Con about 7 weeks ago, people have been telling Seahawk that he looks like Ron Weasley at the rate of a couple a week. It’s the long-ish red hair and his lankiness, I think. So he decided to own that and went as Ron for Halloween. He already had the jeans and dark red dress shirt. I bought some cheap yarn on Saturday and knit him a scarf (this was about $4). Then on Halloween, between lunch and leaving for the mall, we hit Goodwill in search of a cape – or something that could work for one. We couldn’t fine a cape, but we did find several T-shirts that had promise. I wasn’t convinced they were long enough, though. Then it hit me: a skirt! If we could find a long black skirt, we could slit it up the center and he could put the waste band over his shoulders. We found one with the weekly half-price colored tag, so he bought that using his own money. Because it was half-price, that was another $4 is all. He found a stick outside to use as a wand, but I don’t think he brought it out of the car. Despite not having a wand, his costume ended up so good that one of the mall employees told him that he “won Halloween.” He even got asked at least once if his hair was a wig, but it’s not. 🙂

So that’s what we did this year. Next year, we’ll likely do the mall again; it’s a win for our family.