Throughout my years on the Schoolhouse Review Crew, I’ve heard only good things about Heirloom Audio Productions. This vendor has come back time and again, having all of their audio dramas reviewed by the Crew. I’ve read several of these reviews over the years, and they’re always positive. Until now, I’ve never had the privilege of listening to one of these dramas; because I know they’re high-demand products for Crew members, I volunteer to sit out so people who are passionate about them can get the opportunity to review them. This time, even though I volunteered once again to sit out, I was chosen to review Beric the Briton – and I’m glad I was. 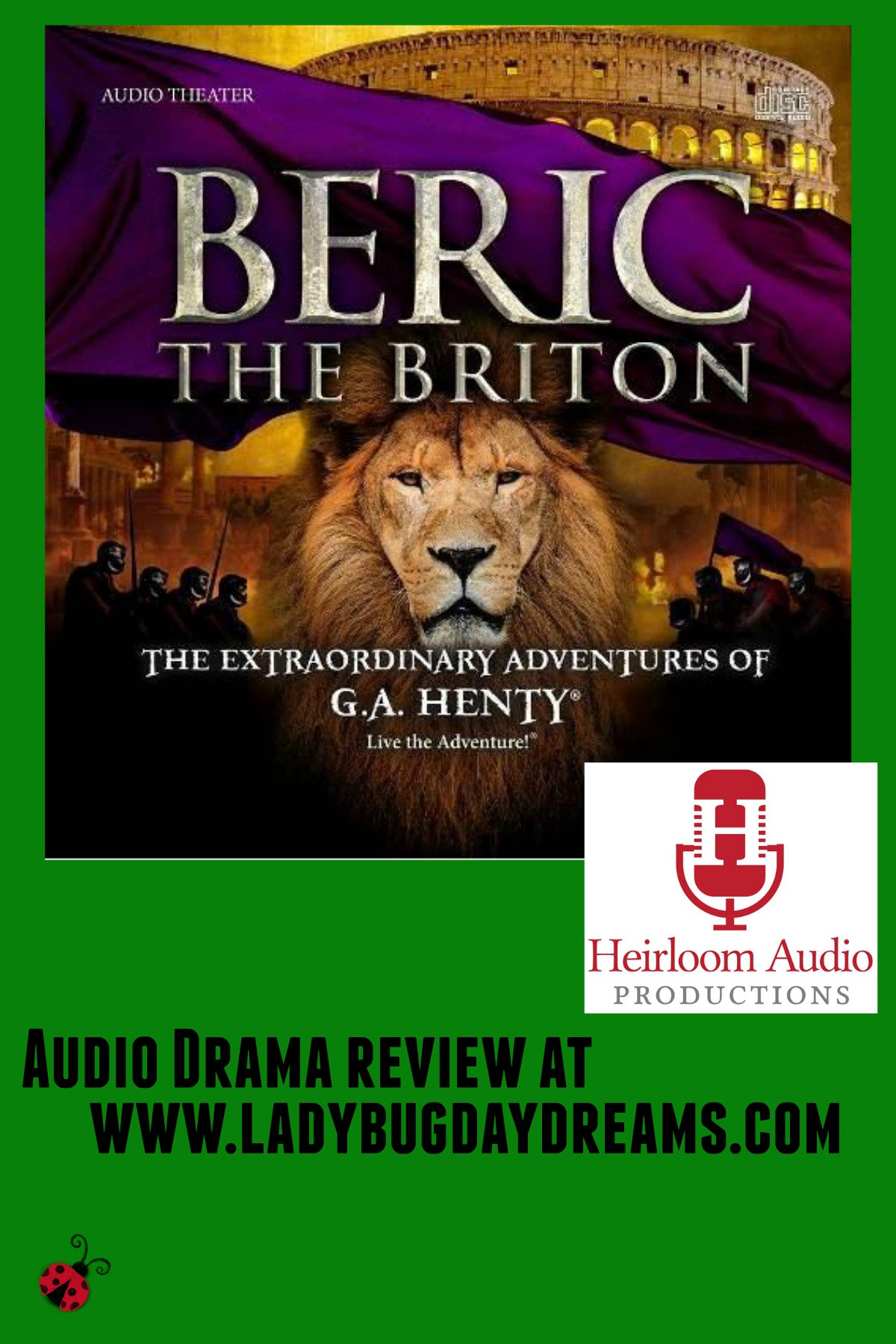 Beric the Briton is based on the novel of the same name by G.A. Henty, a 19th century novelist and war correspondent. During the course of his 30-year (approximately) writing career, he penned over 80 novels (according to his Wikipedia page). Several of these have already been turned into audio dramas by Heirloom Audio, and one (A Final Reckoning) was made into a movie in 1929, over 25 years after the death of Henty.

The original novel of Beric was published in 1893 and tells the story of the Roman invasion of England. Beric and his friend Bodouc are British citizens who get captured by Rome during the invasion and are forced to become gladiators who are given to the emperor Nero as servants. They hear rumors surrounding a man called Christus, and as they hear and learn more about this mysterious man, they find themselves confronting their own pagan pasts. They’re forced to make some serious decisions: should they continue to seek revenge on their captors, or offer the forgiveness of Christus?

For this review, I received a physical copy of the two-disc CD set containing the story as well as large variety of digital components, including:

Of these bonuses, we’ve so far just used the mp3 audio drama (we don’t have a CD player, so even though I received a physical CD, we didn’t use it), but I did spend a bit of time looking through the other items, especially the study guide. Heirloom put a lot of time into creating this study guide, and it’s really wonderful. It opens with biographies of the historical figures from the story (Emperor Nero and Queen Boadicea), and then for each track of the CD (roughly 5-7 minutes of content), there are comprehension questions, critical thinking questions, and vocabulary. Sprinkled throughout the guide are also other activities, such as recipes, interesting facts (types of gladiators, for instance), links to further learning, and more. Looking back at the study guide after having heard the drama, I wish I’d had the boys use it while we listened. But no matter – we’ll listen to this again in the fall and do the study guide “right” when we do.

When we first received the set, Munchkin, Small Fry, and I listened to the first half of the part I (the equivalent of the first CD – there are two in the set). (Seahawk was busy doing something with Will.) It became obvious to me at that point that it wasn’t going to be their cup of tea. It was difficult to focus for them, and we honestly just had a lot of things going on at the time. They were drawing while they listened, and I was using the computer to create birthday party invitations for Small Fry. It wasn’t the right time to have tried to listen to something so complicated as this, so I put it away for a while.

A couple of weeks later, I tried again, this time with all the boys. This was definitely the right answer! We still did other things while we listened, but they were things that didn’t require quite so much brain energy. The boys were still drawing and coloring, but I worked on knitting instead of thinking through party details. Doing “monotonous” things helped a lot with the ability to listen to the story. Seahawk, who I figured would be the least interested in this, ended up being the one who loved it the most. When the first part ended, he was chomping at the bit for the next part; now that we’ve heard the whole thing, he’s anxious to hear more of these audio dramas.

Even though Munchkin didn’t really resonate with the audio drama, I’m going to have him read the e-book of the novel that came with our bonuses. The story is good enough that I want him to know it; he’s just more of a reader than a listener – like his mama. I’m not sure yet whether I’ll have it printed and bound for him, or put it on my Kindle and let him borrow it.

In conclusion, we’re Heirloom Audio Productions converts. We absolutely loved this audio drama, and will be among those requesting more of them to review in the future.

You can purchase Beric the Briton on CD for $29.97, and this price includes the mp3 version, study guide, one printable poster, and soundtrack mp3. For $19.97, you can get the drama on mp3 (no CDs) with the study guide and printable poster.

This is Heirloom Audio’s fifth installment in their series of Henty-inspired dramas. They also have Under Drake’s Flag, In Freedom’s Cause, With Lee in Virginia, and The Dragon and the Raven.

There are 100 Crew members reviewing Beric the Briton this week. Make sure to hit the Crew blog to find out what they all thought about it, too.