I love the French language. I’m rusty in my usage of it, but I love it nonetheless – so much so that I chose it for my children for their second language, even though by local standards, Spanish would make more sense. When I learned about Whistlefritz, I was super excited to try it out for my children.

For today’s review, I received a digital version of the Educator’s French Collection. This includes 4 videos, 3 audio “CDs,” and 2 PDFs (French lesson plans for kids and French matching cards). 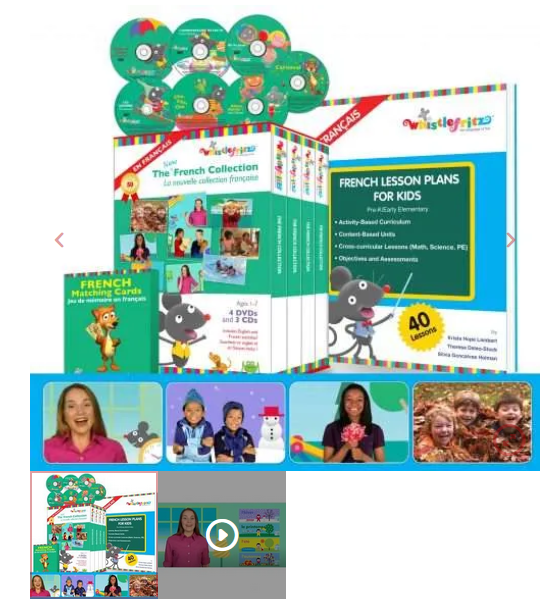 I started by downloading all of the files to my computer. I was really hoping to be able to somehow “cast” those videos to the TV, but I haven’t figured that out yet so we just watched them on the laptop. It’s worked out okay using Windows Media Player. I moved the audio files to my phone for car listening. Ever since receiving the set, we’ve listened to this music in the car regularly. We’ve had it for just over a month and it’s not uncommon to hear Grasshopper (age 9) sing, “Quand je serai grand . . .” (when I grow up . . .) or my husband belt out, “Les petits poissons, dans l’eau . . .” (the little fish in the water . . .). Even my 3-year-old loves these songs. Whenever I start to sing “La tête, les épaules, genoux, et pieds” (Head, shoulders, knees, and toes) to him, he immediately gets a huge grin on his face. It’s been really rewarding seeing and hearing my family actually begin speaking (er, singing) French since we received this product.

When it comes to the videos, Whistlefritz is an immersion program (which I love!), which means there is no English whatsoever during the program (not even subtitles). The program is designed with a lot of repetition, which of course, is the best way to learn a language.  That’s how we all learned English, after all.

The host, Marie, has a really fun personality. She seems to truly be enjoying her time onscreen. She’s not the only one you see, though. There are les enfants (children) in the videos as well. The show also features “Fritzi,” an animated mouse, and “Rito,” an animated fox. The main talking points are all handled by Marie, though.

The first video, On va jouer, focuses on teaching parts of the body, clothes, numbers, and animals. The combination of speaking and singing, real people and animation, makes this a real joy to watch. Dedans et Dehors, the second DVD, focuses on rooms in the house and foods. The standout song in this film is the one about all the different fruits. Les Saisons (the seasons) covers the calendar, and the final video, L’Anniversaire de Fritzi (Fritzi’s birthday) talks about party words.

Whistlefritz suggests their products for ages 2-7, and I heartily agree with that recommendation. Due to its immersive nature, Whistlefritz might not be a good choice for older children. While they might learn the words, they’re likely to fight you a bit more because they can’t understand what’s going on. The younger kids are more malleable that way.

Because Whistlefritz is designed for younger learners, it’s not a curriculum per se. Really all you have to do is start the video and let the kids watch it. It’s colorful and vibrant enough that kids will be captivated by it, even during the first several viewings before they can understand any of it. It can, however, be a bit overwhelming before you start to understand some of the vocabulary (for us “older folks”). I found that for me personally, I could only handle about half of an episode the first few viewings. Not understanding much (or any) of the film can make one weary. Keep at it, though, and pretty soon you and your children will be well on their way to learning a new language.

I would heartily recommend this product to anyone looking for an immersion approach to foreign language teaching, especially for younger children with no previous training. And if you don’t want French, Whistlefritz also has a large selection of Spanish programs as well. The videos are also available to rent or buy from Amazon video, so that might be a viable option for some families (it would be ideal for ours, if we hadn’t received this review copy).